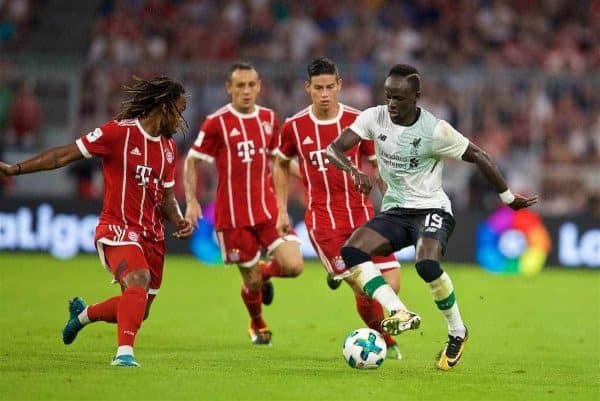 Liverpool will face Atletico Madrid in the final of the Audi Cup after defeating Bayern Munich 3-0 at the Allianz Arena.

Following Saturday’s victory against Hertha Berlin, Jurgen Klopp vowed to field his strongest available team in the Audi Cup and that’s exactly what he did as Philippe Coutinho, Sadio Mane, Mo Salah and Roberto Firmino all started.

There was a return for Loris Karius in goal and Jordan Henderson captained the side from midfield.

Liverpool started off strongly as Firmino set up Mane within seven minutes to put the visitors in the lead.

The Reds almost doubled their lead when Alberto Moreno‘s pinpoint cross found Mo Salah at the back post but the new signing couldn’t beat Sven Ulreich.

It didn’t take too much longer for Salah to score Liverpool’s second as Mane and Moreno combined on the left to set-up a straight forward tap-in for the Egyptian.

Liverpool thought they had scored a third when Ryan Kent‘s quick feet helped to set up Marko Grujic shortly after the pair’s introduction to the second-half.

However, a flag was raised and Liverpool had to settle for a 2-0 victory as they saw out a very impressive performance.

Daniel Sturridge was keen to make his mark on the game and he did so within minutes as he added Liverpool’s third goal.

It was a disappointing end for Liverpool though as the striker immediately pulled up with an injury after scoring and was forced to leave the field.

Fans couldn’t wait to see Coutinho, Mane, Salah and Firmino start together for the first time…

Firmino, salah, mane, coutinho ?? can't wait for this. Abandoning the wife and kid to find a sports bar in Barca if I have to! #lfc #BAYLFC

And when Firmino and Mane combined for the first goal, fans were delighted…

Every single time we get the ball back we look capable of springing a counter & scoring. What a fantastic front 3 we have, then there's Phil

“That goal is why Firmino is so well suited to lead the attack for us. Wins the ball back and takes the right option straight away. Nice finish from Mane too!” – Ed209 on the forums.

Things got even better when Mane, Moreno and Salah combined for Liverpool’s second goal…

Fantastic Salah-Mane-Firmino-Coutinho on the build up. Liked @lfc18alberto going forward and well sit at the back.

Liking what I have seen of Salah pre season #LFC #YNWA

There was plenty of praise for Alberto Moreno…

When you're admiring how great that left back is playing but then you realise it's Moreno #LFC pic.twitter.com/0NEXY9naTn

Who's this new left back? Monster #Moreno #LFC

“Moreno is looking decent this pre-season. Maybe a little too late though.” – Solo Pigeon Pack on the forums.

Sturridge’s introduction got fans discussing his part this season…

Sturridge doesn't compete. Which why we look dead when he plays. Firmino for me all the way. #ynwa #LFC

If Mané, Firmino, Coutinho & Salah click consistently, it's hard to see where Lallana, Sturridge and Solanke get games…? #LFC

“Wonderful play from the two youngsters, Kent and Grujic.” – Awny on the forums.

Don't care if it stands or not, it's pre season. Still incredible from Ryan Kent there #LFC

Shame that goal was disallowed. Think it was due to Bayern having 10 men on the pitch as Rafinha was sent for a hot dog by Kent. #LFC

But Sturridge’s injury was a disappointing moment…

Absolutely gutting for Sturridge. Hopefully it's nothing too serious #LFC

“Fair play to Sturridge. He pulled something and still finished.” – Pete Matthews on Facebook.