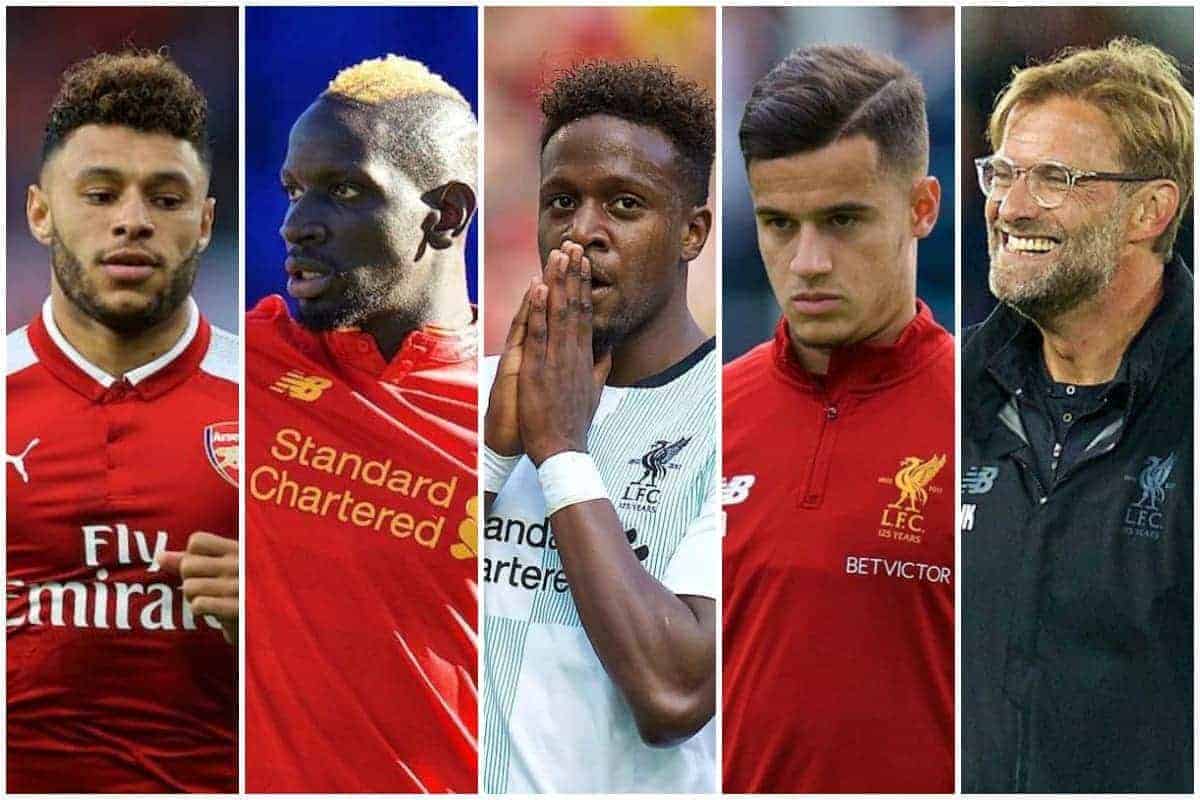 We round up the latest Liverpool transfer news and rumours, as the final week of the summer window promises furthers ins and outs on Merseyside.

The Reds will round off the first month of the season at home to Arsenal in the Premier League on Sunday afternoon, before the September international break.

With three wins and a draw from their first four games in all competitions, including a 6-3 aggregate win over Hoffenheim in the Champions League play-offs, Jurgen Klopp‘s side are in great form.

The German will be looking to build on that in the transfer market before August 31, and here’s the latest from the rumour mill for the Reds.

Reds ‘Firmly in the Frame’ For Oxlade-Chamberlain With just three players arriving to bolster Klopp’s squad so far this summer, the hope is further reinforcements are secured ahead of Thursday’s deadline.

One possible signing is Arsenal midfielder Alex Oxlade-Chamberlain, who has been on Klopp’s radar since the start of the year.

According to the Mirror, the Reds are set to make a “huge push” for the 23-year-old, after he rejected a new £180,000-a-week contract offer from the north London club.

Reports claim that Arsenal are now ready to sell Oxlade-Chamberlain, who has just one year left on his current deal, with the Gunners valuing their No. 15 at £35 million.

The Reds face competition from Chelsea for his signature, but “Oxlade-Chamberlain’s team-mates think he is more likely to go to Liverpool.”

Liverpool are still yet to secure departures for some of their out-of-favour talents, too, most notably France centre-back Mamadou Sakho.

Sakho has spent the summer working his way back to full fitness following a knee injury, but is not in the frame for a first-team return under Klopp.

Now, according to the Telegraph, West Brom are set to meet the Reds’ £30 million valuation of the 27-year-old, as they prepare to sell Jonny Evans to Man City.

Crystal Palace and West Ham have also been credited with an interest in Sakho, but neither are likely to match West Brom‘s offer.

City’s pursuit of Evans is said to be heading towards a deal worth in excess of £30 million, financing the Baggies approach for Liverpool’s No. 3.

Liverpool Could Sell Origi Before Deadline

Another player touted with an exit before the end of the transfer window is Divock Origi, with surprise reports emerging on Friday night.

Origi was left out of Klopp’s matchday squad for Wednesday night’s 4-2 win at home to Hoffenheim, with Dominic Solanke and Daniel Sturridge preferred on the substitutes’ bench.

And the Telegraph have claimed that Liverpool “may be prepared” to sell the Belgian, who is eager to play regular first-team football.

Tottenham, Anderlecht and Marseille are all said to be interested in Origi, though the likelihood of the Reds parting ways with the 22-year-old seems slim.

These claims seemingly stemmed from Klopp’s comments ahead of Sunday’s clash with Arsenal, saying Origi was left out in midweek due to the strength of his attacking options.

Elsewhere in his pre-match press conference, Klopp discussed the fitness of Philippe Coutinho, and the prospect of the playmaker joining the Brazil squad next month.

“If they want to see him and check him, he has to go there,” he told reporters. “I don’t know exactly but I think it will happen. We’ll do it, it’s no problem.”

This is something of a surprise, given Coutinho has supposedly been sidelined with a back injury since the start of the season, as he pushes for a move to Barcelona.

Coutinho’s latest attempt to force a transfer surfaced on Friday evening, with beIN SPORTS claiming the 25-year-old has told the club he doesn’t wish to be part of Klopp’s Champions League squad.

However, both the Liverpool Echo‘s James Pearce and the Times‘ Paul Joyce have maintained that the Brazilian won’t be sold.

Finally, one of Hoffenheim’s standout talents from the Reds’ two-legged victory, Kerem Demirbay has been linked with a move to Merseyside.

German publication Bild claim that Klopp spoke to the 24-year-old after Wednesday’s clash.

“Liverpool have already made Demirbay aware that [Klopp] can imagine seeing the midfield strategist in the red jersey,” they report.

However, it is suggested that a move for the midfielder is unlikely to come this summer, with Demirbay signing a new contract with the Bundesliga side in February.