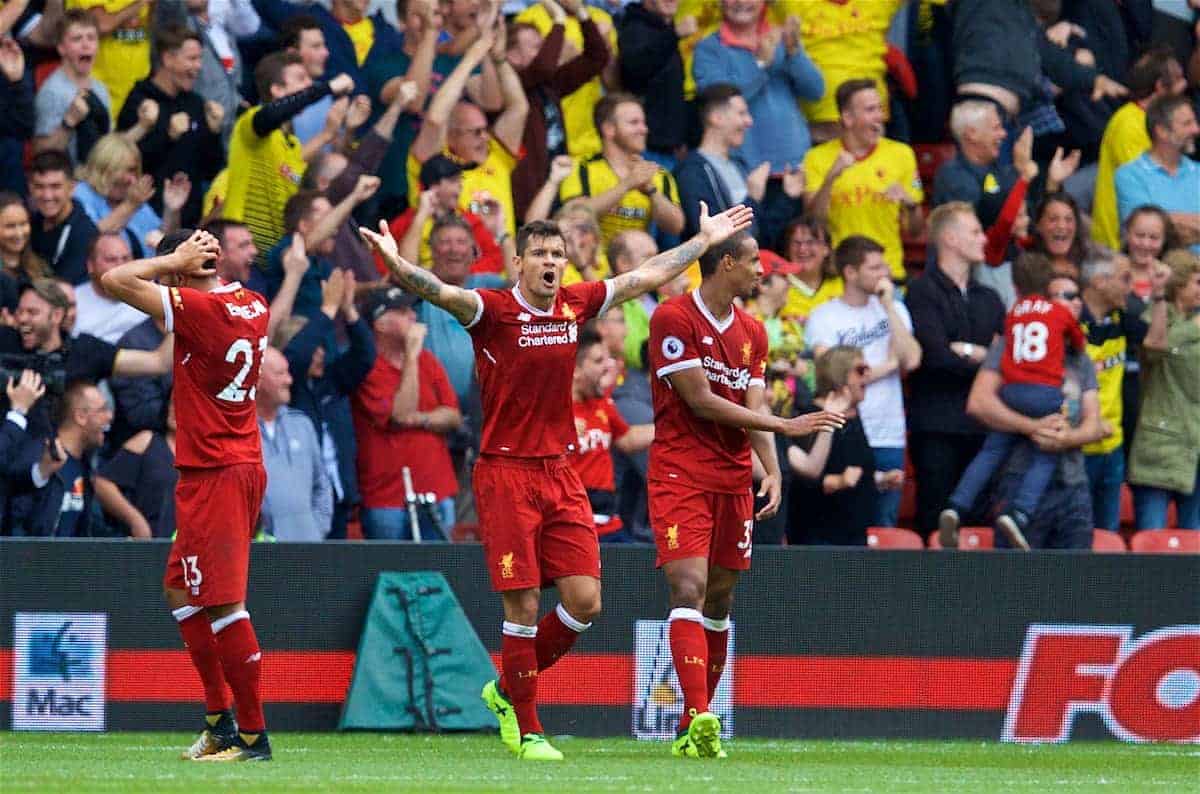 Liverpool supporters were left demoralised as Jurgen Klopp‘s side were held to a 3-3 draw away to Watford as they began the Premier League season.

Heading to Hertfordshire for their first game of the new campaign, Liverpool will have been eager to get three points on the board as they prepare to fight on four fronts in 2017/18.

After a rollercoaster afternoon at Vicarage Road, however, they were left flattened, as Miguel Britos’ late strike put paid to an excellent fightback from the likes of Sadio Mane and Mohamed Salah.

Here’s how Liverpool supporters saw the 3-3 draw on social media and our forums.

Moreno deserves a fresh season fresh start, looked good in pre season so hopefully being 2nd choice to Milner has made him work hard #LFC

“Perfect line up considering injuries if you ask me. Hopefully Moreno carries on with his impressive pre-season form!”

Left footer at left back is nice; a quick one at that. Makes last season's Moreno-snub seem stranger though.

I'm sure I speak for all when I say that I hope #Klopp's faith in Albie #Moreno is repaid. #lfc

Few were surprised when Okaka headed home a corner…

“First set piece we face and it’s a free header and a goal. Biggest man they have is unmarked. F**king dreadful.”

Worked hard on defending set pieces during pre-season then ey

Mane levelled the scores with a brilliant goal…

Brilliant goal that, Mané showing how important he is not just with the finish but in the build up. #TheNewMagician

– Isle on the forums.

The season only really starts when your team score their 1st goal ??

But Doucoure struck back shortly after…

Meanwhile, normal service is resumed at the back.

“Defence getting absolutely ripped to shreds…. Gonna be a long old season again…”

Firmino restored parity from the spot…

“A little spring in our step now”

.@premierleague Defenders where are you!!!!!!!

Front three have all scored. That's at least one definite positive from today.

All the promise is still there for Liverpool but sadly so are all the concerns. Stand still and you soon get left behind in this league.

Promising in Attack,Shambolic in defence, Water is wet #LFC

Next summer, instead of going to Asia to improve their brand, Liverpool may want to stay back at Melwood & work on defending. Just a thought

Should be a wake up call for Klopp, Edwards and everyone involved in recruitment at #lfc
No way we can have this personnel on 1st Sept.

“Klopp and the club needs to wake up because we need more than Van Dijk.”

The result is down to Klopp tbh, no CB signed this summer and subs were awful today, Don't know why TAA came off it made no sense

“Goal was coming a mile away. We’ve never had control in this game.”

Sweeting on the forums.

Not sure I have he stomach for 37 more games of this. We just aren't showing any signs of improving our weaknesses.

Given how poor Liverpool were for spells today a draw is hardly the worst result. Shambolic defending will put paid to hopes of kicking on.

What was your take on Liverpool’s opening-day draw? Have your say in the comments section.