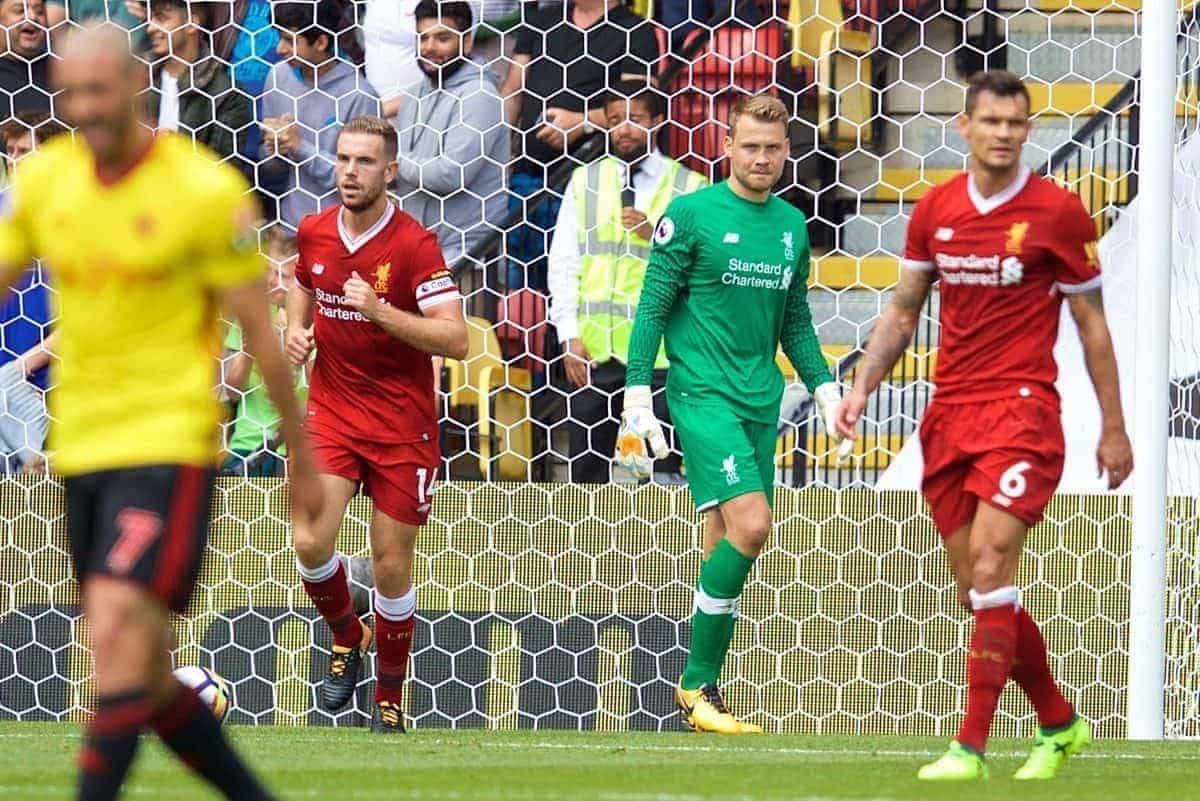 Liverpool produced a Jekyll and Hyde performance at Vicarage Road, held to a dramatic 3-3 draw away to Watford in the Premier League.

Marking his 100th game in charge of the Reds on their first game of the 2017/18 campaign, Jurgen Klopp led his side to Hertfordshire looking for his 51st win.

Though hampered by the frustrating news of Philippe Coutinho‘s transfer request, Liverpool forged on into the weekend prepared to push for three points over the Hornets.

Along with Coutinho (back), Nathaniel Clyne (back), Adam Lallana (thigh) and Daniel Sturridge (thigh) all missed out due to injury, but Klopp was able to hand a debut to summer arrival Mohamed Salah.

Having won 1-0 at Vicarage Road at the end of last season, the Reds will have been confident as they made their way down the M1, though it certainly proved a tough test. Liverpool, lining up in their customary 4-3-3 formation, controlled the game from kickoff at Vicarage Road, but it was Watford who made their mark first.

After Stefano Okaka threaded Roberto Pereyra through on the break, with Dejan Lovren blocking the Argentine’s resulting shot, the Hornets’ No. 33 was on hand to head home the corner.

Watford continued to stifle the Reds in the first half-hour, ensuring Klopp’s midfielders had little time on the ball to feed his new-look forward line.

But with Sadio Mane picking the ball up in space, the Senegalese led a sweeping move, interchanging with Alberto Moreno and Emre Can, before curling the ball past Heurelho Gomes to make it 1-1.

It wasn’t long before the Hornets struck back, however, and it was Abdoulaye Doucoure who poked home from close range to put the home side ahead for the second time.

The Reds returned to toothlessness thereafter, with Salah blazing over from the edge of the six-yard box and Mane missing with a header, as Anthony Taylor blew for half-time at 2-1.

Klopp opted against making any changes at half-time, keeping faith with his starting lineup, and was swiftly rewarded for doing so.

With the ball threaded through for Salah into the box and Gomes rushing out, the Egyptian darted in and nipped it away from the Watford goalkeeper, brought down for a penalty the process.

Firmino, who has taken over penalty duties from James Milner, slotted home, before turning provider for Salah two minutes later, with the winger scoring a debut goal to put Liverpool ahead.

Liverpool maintained control throughout the second half, and the pace of Salah in particular proved consistently troubling for Watford, regularly found beyond the home defence.

Georginio Wijnaldum had a great opportunity to put the icing on the cake when found in the penalty area late on, but the Dutchman skewed wide.

That proved pivotal, as with Watford making a late rally at the opposite end, Miguel Britos tucked home to make it 3-3.