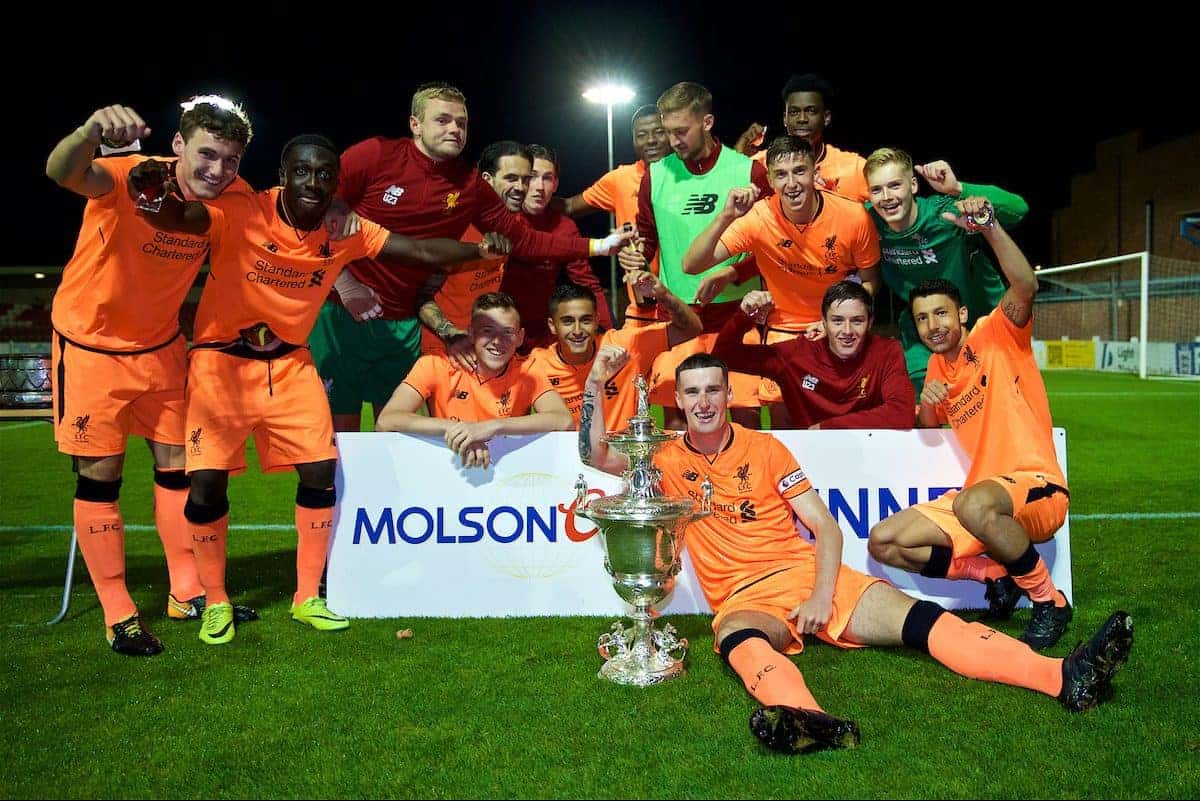 Liverpool under-23s were crowned champions of the Lancashire Senior Cup last Friday when they defeated Fleetwood Town on penalties, and manager Neil Critchley believes it has given his side a boost ahead of their crucial Premier League 2 fixture against Man City on Sunday.

The youngsters host City at Prenton Park on Sunday afternoon (1pm) and Critchley hopes they will be full of confidence after their dramatic cup victory.

“It does (give them a boost), yeah,” Critchley told This Is Anfield. “We’ve had some good games with Manchester City at U18s and U23s over the past few seasons.

“I’m expecting a tough encounter on Sunday. We’re going into the game in really good form. We’re unbeaten in the league and obviously we won a cup competition the other day.

Cup success is something Critchley hopes will become a regular occurrence for his players throughout their careers.

Among the under-23s squad who won the trophy were first team youngsters Ovie Ejaria and Harry Wilson, as well as striker Danny Ings.

Critchley admitted his players are always being assessed and the amount of silverware they pick up in their youth years will certainly be taken into account.

“At under-23 level, we emphasise a lot that it’s a performance phase,” he explained.

“Obviously, the more you move up the age groups and the closer you are to senior level, the results and the performances do matter and they’re very, very important. “It’s certainly better picking up the trophy than seeing somebody else pick it up and it was nice to see the boys smiling at the end and enjoying a bit of success together.”

One player who will hope to return to the starting line-up is Matty Virtue, who came on as a substitute and impressed during the cup victory.

He has already netted two goals this season, as well as providing one assist for the under-23s in their opening three matches and looks in excellent form.

“The only reason he (Virtue) didn’t start the other day is because we had some of the first team players drop down for us,” said Critchley.

“That could well happen again on Sunday. We’re not sure yet as the first team will play on Saturday and obviously there is a Champions League match during the week but Matty has been starting for us. “He’s a regular starter – that was only circumstance that took him out of the team. He will be one of the first names on the team sheet, if not the first name because his performances merit that and warrant that.

“He’s been fantastic so far and I know he is catching the eye of the manager and the staff at Melwood so he is certainly creating an impression.

“It would be easier for us as coaches if they were all out of the limelight. Matty is certainly one who has gone under the radar a little bit.

“He’s a late developer. When I first came to the club he was small and skinny but you see him develop physically and because of that he’s grown in confidence.

“He now realises he can make those runs into the box and run back again because physically, he has developed and he’s ready to do that.

“He’s grown in confidence on the back of that and it’s great to see his success. Long may that continue.”

* Liverpool U23s vs. Man City U23s is at 1pm on Sunday at Prenton Park. Tickets are just £1 for kids, and LFC season ticket holders get in for free.