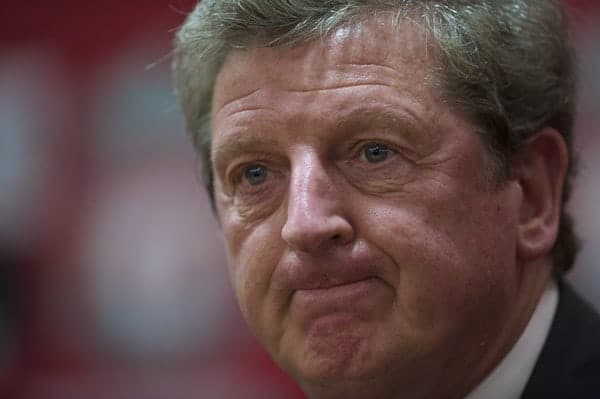 Liverpool’s worst manager in recent times, Roy Hodgson, is set to return to management at Crystal Palace—and Reds supporters have been left stunned by the news.

Hodgson is one of the least popular individuals in Reds history, with his disastrous six-month reign in 2010/11 threatening to relegate the team at one point.

Palace made the harsh decision to sack Frank de Boer on Monday, and while the decision has come as a shock to many, his replacement is even more unfathomable.

Hodgson looks almost certain to take charge at Selhurst Park—a job he doesn’t merit at all after his embarrassing spell as England manager.

Then again, Sam Allardyce took over at Palace after a one-match stint with the national team.

Unsurprisingly, Liverpool fans and non-Reds alike have been putting the boot in somewhat; here’s the best of the reaction.

Not sure what's more ridiculous. Sacking De Boer after 4 games or giving the job to Hodgson.

All the best, lads. @CPFC pic.twitter.com/l3uD9B7xIe

Ah well, if it is going to be Hodgson at least we'll find out if Benteke's any good at taking corners. #CPFC

Imagine getting promised years of Crufffian gorgeousness and being given Roy "Just fucking launch it" Hodgson literally two months later.

Sacking an exciting,young,Dutchman after 4 games & appointing a
70 y/o, washed up cabbage like Hodgson is the most Brexit move in PL history

Sacking de Boer and hiring Hodgson is like kicking over a dumpster fire & setting the building on fire. Relegation bound

Actually been nice to have a timeline not chock full of crowing about Hodgson's team losing.

If Roy Hodgson has anything about him, at his unveiling he will say: "I don't know why I'm here."

Wilfried Zaha must be buzzing to play under Hodgson.

Oh Crystal Palace you fools! The Hodge is back ?

The real shame of it is we're not going to get a chance to play Palace until after Hodgson gets sacked.