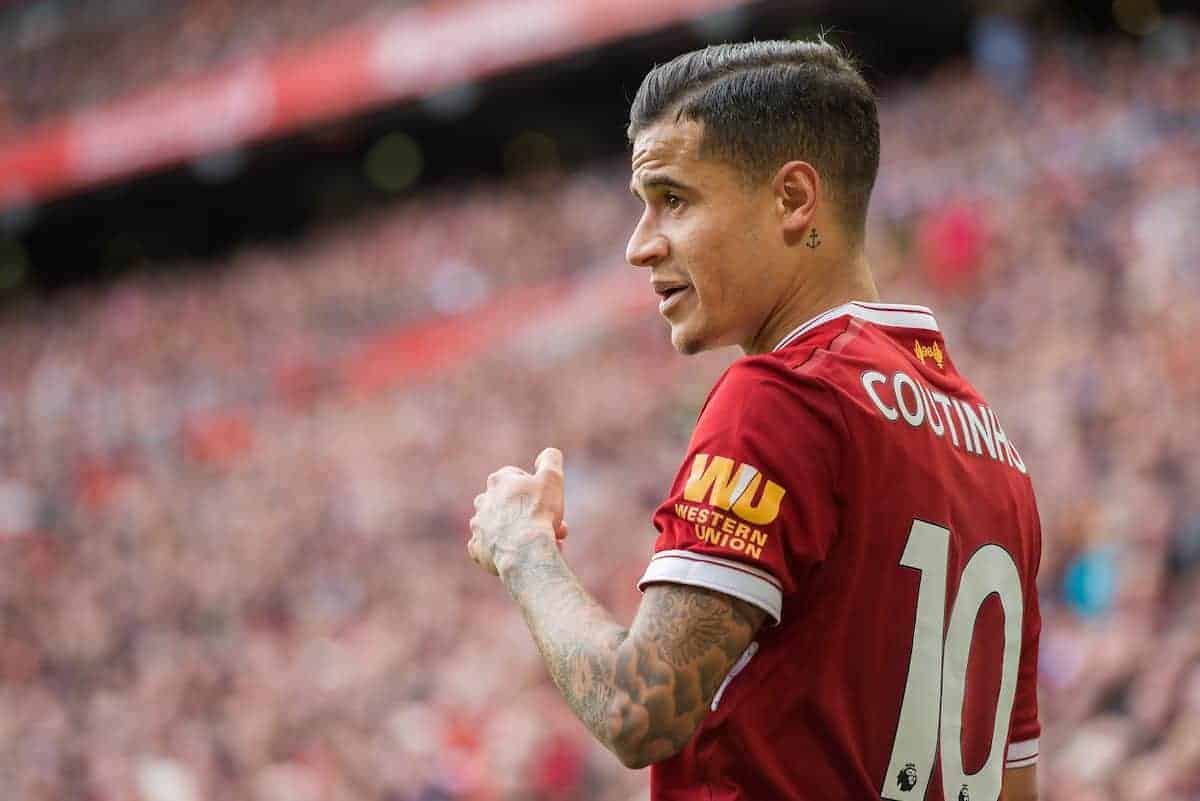 Liverpool produced a solid performance, but failed to find the opening they needed as they were held to a 1-1 draw at home to Burnley on Saturday.

After Loris Karius‘ spell between the sticks in Wednesday night’s 2-2 draw with Sevilla, Simon Mignolet regained the gloves for the Premier League.

The Belgian dealt well with Burnley‘s direct approach, particularly with his strong punches in a crowded penalty area, and he could do little when it came to Scott Arfield’s opener.

With Klopp rotating between Alexander-Arnold and Joe Gomez at right-back, the 18-year-old was restored to the starting lineup as part of an attack-heavy side.

Unfortunately, the academy graduate showed his inexperience, with Alexander-Arnold at fault in the buildup to Burnley‘s goal and his final ball typically lacking in attack.

He did test Clarets goalkeeper Nick Pope with a volleyed effort late on, however.

Matip is the only player to have played every minute of every game for the Reds this season, with Klopp alternating with the Cameroonian’s partner and his full-backs.

He is invariably the calmer of the two centre-backs, and this was the case again at Anfield, producing some solid defensive forward, good forays forward and expansive passing play.

But it cannot be ignored that Matip played a pivotal role in the opening goal, showing a lack of chemistry with Ragnar Klavan.

With Dejan Lovren struggling in midweek, and suffering with a sore back, Klavan returned to Klopp’s back four, looking to improve on a poor showing against Man City last time out.

Klavan is better at working on the front foot than Lovren, and it showed on Saturday—but as with Matip, he was part of the fatal mixup at the back to gift Arfield his goal.

Robertson was Man of the Match in his only appearance of the season prior to Saturday, ensuring his return to the side was welcomed.

Strangely, the 23-year-old spent much of the first half driving up and down the left flank to no avail, as Philippe Coutinho ignored his presence on the overlap.

When he was given the ball, however, his delivery was characteristically excellent, and he came close to scoring after a darting run in the second half. Arguably the best of Klopp’s midfield three against Sevilla, Can was retained to serve as Liverpool’s No. 6, alongside Coutinho and James Milner.

The German played a confused role, caught between his normal duties roving forward and those of the deep-lying midfielder, such was the landscape of the game and Liverpool’s dominance.

He kept things tidy on and off the ball, but showed his frustration late on, caught in an unnecessary tussle with Jack Cork.

Just under a month on from his last start, Milner returned to Liverpool’s midfield three, taking over from Jordan Henderson to wear the captain’s armband.

Milner provided a nice, robust option in midfield, and he looked most likely to create an opening in the closing stages. A solid, but unspectacular display.

After a lengthy flirtation with Barcelona and a second-half cameo in midweek, Coutinho made his first start of the campaign as part of Klopp’s midfield.

The 25-year-old certainly took time to adjust, and failed to hit the target despite seven attempts on goal, but he did show signs of the vibrancy and creativity that Liverpool need. With Sadio Mane suspended, Salah was tasked with providing the Reds with their primary outlet on the flanks, utilising his pace to complement the more measured Daniel Sturridge and Roberto Firmino.

The winger was, as ever, relentless in the final third, with his excellent goal in the first half a testament to his impact since joining from AS Roma.

He remained the most likely threat as the game wore on, and could have won a penalty when he was brought down by Ben Mee, but referee Roger East failed to acknowledge the foul.

Only Matip, Salah and Firmino have started every game for the Reds this season, and the Brazilian’s presence in the side is almost essential, such has been his development in the No. 9 role.

He was certainly not as efficient from the left flank, however, struggling to craft openings or break through on the overlap, with his quality required in the middle. Making only his second start of the season, Sturridge took his place in Klopp’s forward line in search of his 100th career goal, and his 62nd in a Liverpool shirt.

The veteran of the attacking group added a touch of class in the final third, with his movement intelligent and interplay proving very useful, and he almost beat Pope just after the break.

However, his influence waned as the second half wore on, with that milestone goal eluding the No. 15. Alex Oxlade-Chamberlain (on for Firmino, 78′) – 6 – Provided extra energy at a key period, but did little to impact the game.

Dominic Solanke (on for Coutinho, 78′) – 7 – Could do little more in the 12 minutes he was given: useful support, great movement and so close to scoring the winner.

After their intense week, taking in a heavy loss to City and a hard-fought draw with Sevilla, Klopp made a sensible move in ringing the changes—though it remained a bold one.

Ahead of the game, the German explained that his seven changes were due to “the intensity of the games and the quality of the squad,” no doubt also planning for Tuesday night’s trip to Leicester City in the League Cup.

It can be argued that Klopp could do little to influence the game as, structurally, Liverpool were impressive, simply lacking the quality to kill the game off.

However, he did delay changing the game with his use of substitutes, and Solanke’s cameo hinted that the England U21 striker could have delivered the telling blow if given more time.