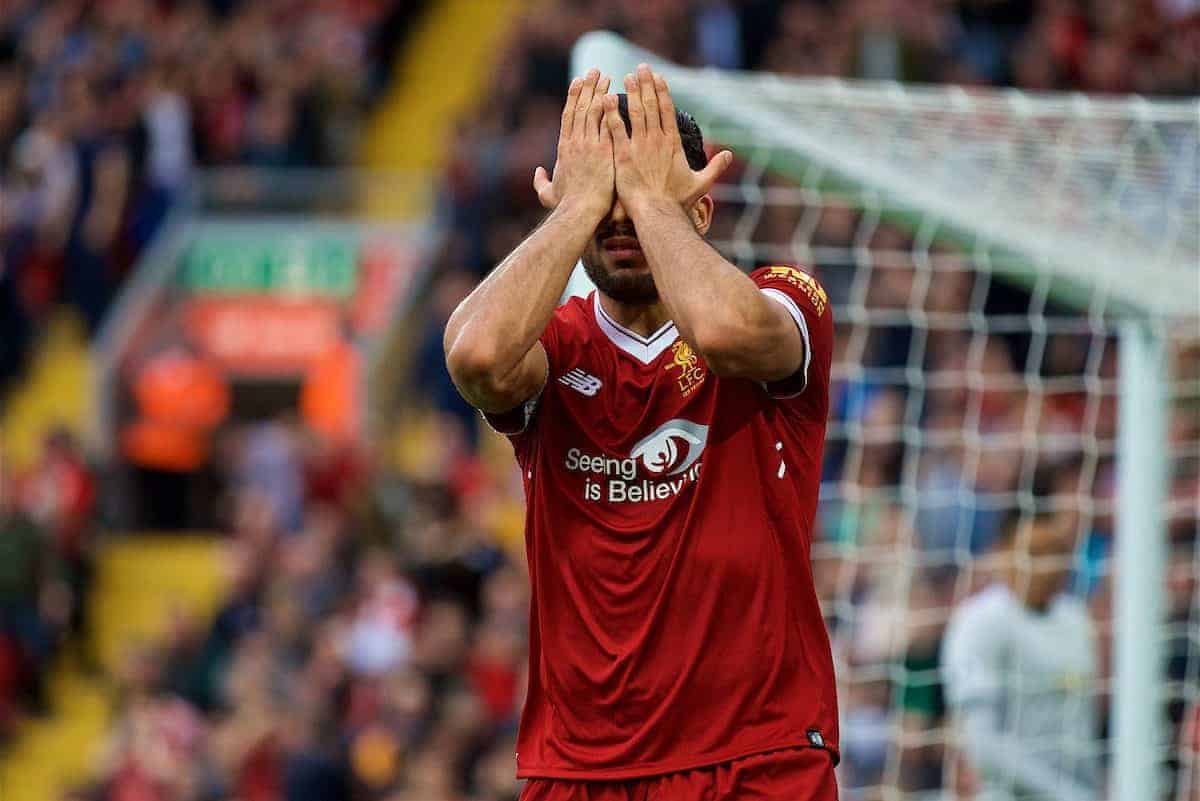 Liverpool were held to a 0-0 draw at home to Man United on Saturday afternoon, despite Jurgen Klopp‘s side dominating throughout at Anfield.

After a long international break that brought the culmination of World Cup qualifiers, the Reds returned to action on Saturday against their arch-rivals.

Taking on an unbeaten United side, Liverpool were looking to improve their poor run of form with a victory, but Klopp was without his star man in Sadio Mane.

The German made two changes to his side from the 1-1 draw at Newcastle United last time out, with Philippe Coutinho moving into attack to replace Mane and Emre Can coming back into midfield.

Having drawn their last three games with a typically conservative United, the Reds will have been eager for the three points this time out, but they were again forced to settle for one. The Reds enjoyed a positive start to the game, with Georginio Wijnaldum particularly lively after a series of quiet performances of late, testing David de Gea from range on 14 minutes.

Mohamed Salah was at the heart of everything good, twisting and turning into space among a packed United defence, and came close following Roberto Firmino‘s drilled cross, but it was deflected out of his path.

United, sitting deep, rarely threatened in the final third, with Dejan Lovren coping well with Romelu Lukaku, but Nemanja Matic did strike the stanchion with a long-range effort.

Joel Matip had a golden opportunity five minutes later, diverting Firmino’s cross towards goal from point-blank range, but the centre-back was denied by a world-class save by the imperious De Gea.

Lukaku, who had been poor throughout, wriggled free on the edge of the penalty area just before half-time, but Simon Mignolet dived well to keep it out as the first half ended at 0-0. Liverpool kept up the intensity after the break, with Firmino and Coutinho particularly bright, as they drifted around the pitch looking to craft openings.

Ten minutes into the half Can, fresh off scoring his first-ever goal for Germany, was found by an excellent cross from Joe Gomez on the right, but the midfielder wasted his chance, lifting the ball over.

The Reds had a strong shout for a penalty on the hour mark, with Coutinho brought down by Ander Herrara, but referee Martin Atkinson waved away half-hearted appeals.

With 12 minutes to play and the scores still level, Klopp opted to send on Alex Oxlade-Chamberlain and Daniel Sturridge, replacing Salah and Coutinho.

Another roll of the dice came in the closing stages, as Dominic Solanke took over from Firmino, but Liverpool were unable to find the opening required.