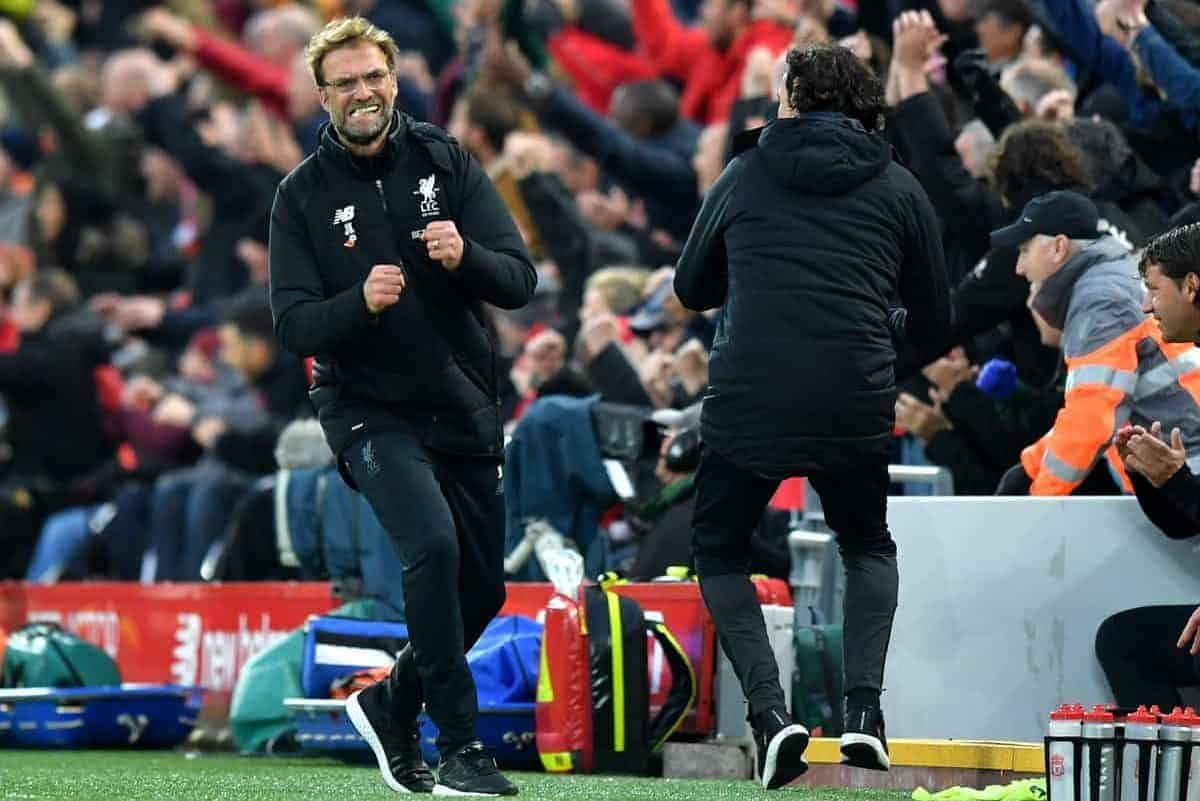 The Reds went into the break at Anfield level with their visitors, with Jonas Lossl’s penalty save denying Mohamed Salah a vital opener.

But Liverpool re-emerged from the dressing room a different beast, and dominated throughout the second half, with goals coming from Daniel Sturridge, Roberto Firmino and Georginio Wijnaldum.

Following their miserable 4-1 loss to Tottenham, Klopp’s side were in desperate need of a result, and Lijnders has explained how the German sought to inspire one.

“We are always searching for unpredictability in our positional game—first half, that didn’t exist,” he told LiverpoolFC.com.

“Unpredictability only starts when there are movements around the ball, so the player on the ball has more opportunities to make decisions.

“The speed of movement then, the type of movement around the ball, that was basically the biggest difference between the first half and the second half.

“The moment that doesn’t exist, those types of moves and options around the ball, then you see that talent doesn’t flourish.

“That was the biggest difference, you saw it from the first minute in the second half.

“That’s why it’s nice that the game is two parts and that there’s 15 minutes in between so you can correct it! That’s what Jurgen and the staff did.” Liverpool’s clean sheet on Saturday was another major positive, with Simon Mignolet and the back four of Joe Gomez, Joel Matip, Ragnar Klavan and Alberto Moreno largely untroubled.

Klavan came in to replace Dejan Lovren at the last minute, with the Croatian pulling out with a thigh injury, which arguably served as a blessing in disguise.

Lovren was in miserable form at Wembley the previous weekend, withdrawn after just 31 minutes after two errors led to goals for Spurs.

But Lijnders, detailing the coaching staff’s view of the game, insisted individual errors stem from a “collective problem.”

“I believe that before each individual mistake there’s a collective problem; there’s a group of players who don’t act in a coordinated way,” he added.

“That’s important to analyse after Tottenham, I think. Only when the individual is forced to react on something that’s not [right] then the problems start.

“Of course, it was really important [to win against Huddersfield].

“The last two years, there were not many games where the opposition outplayed us, outpassed us, outpressed us, but if it happens you have to take it.

“Tottenham were the better team. But it’s interesting because you have a player then the same player with confidence or without confidence, that’s a different type of player.”

Lijnders is a very intelligent coach with a bright future, and his knowledge of the game provides an interesting take on Liverpool’s recent issues.

The hope will be that the victory over Huddersfield, and a relatively simple clash against Maribor on Wednesday night, will instil the confidence the Reds need to improve.