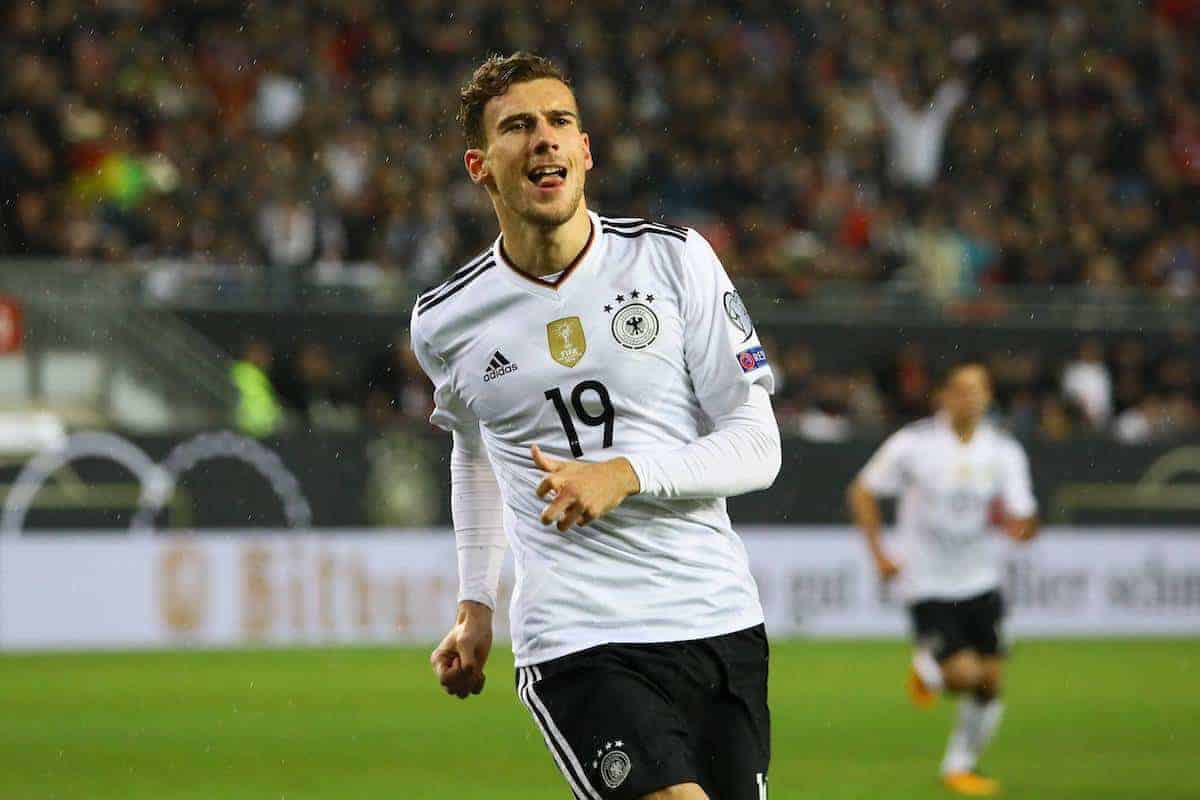 Liverpool’s interest in Schalke midfielder Leon Goretzka may suggest Jurgen Klopp is planning for life without Emre Can, whose contract expires in 2018.

Goretzka finds himself in the same situation as his Germany team-mate, with less than nine months left on his deal at the Veltins-Arena as prospective suitors circle.

The 22-year-old is attracting eyes from around Europe, with Liverpool the latest to join the likes of Chelsea, Barcelona, Bayern Munich, Man United and Tottenham in weighing up a move.

Clubs outside of Europe will be able to enter negotiations with Goretzka in January, with a view to a free transfer next summer, as was the case when the Reds signed Joel Matip from Schalke in 2015.

That is also the situation Liverpool find themselves in with Can, with Juventus expected to make an approach in the coming months.

So is their interest in Goretzka a prelude to Can’s departure, and would the German be a good replacement if so?

Goretzka began his career in his hometown of Bochum, first with Werner SV 06 Bochum as a youth and then onto VfL Bochum, where he progressed through the ranks and into the first team.

He made his senior debut for the club on the first day of the 2012/13 campaign in 2.Bundesliga, but less than a year later he had made the move to Schalke, for a fee of around €4 million.

His time at Schalke has been unpredictable, working under five managers so far, including Roberto Di Matteo and Markus Weinzierl, and it took him time to establish himself as a key man.

But now, at 22, he is undisputedly one of Schalke’s most important players, and he has already made 127 appearances for the club, scoring 18 goals and laying on 13 assists.

He arrived as a flexible young talent capable of operating on either flank and in a variety of duties in the middle of the park, ranging from a deep-lying No. 6 to a supportive No. 10.

Goretzka is at his best in a box-to-box role, however, and this is where he has honed his talents in Gelsenkirchen.

Standing at 6’2″ and blessed with beguiling pace, Goretzka is able to cover ground swiftly, gliding through the midfield to support attacking moves.

A testimony to his development in this approach is that Schalke’s No. 8 has scored 11 of his 18 goals for the club since the start of 2016/17, while all six of his goals for Germany have come since the Confederations Cup in June.

Owing to his natural physicality, Goretzka is adept in a more defensive remit, too, and he blends this with a nimble technicality and dribbling ability.

His precarious future at Schalke comes following a period of instability at the Veltins-Arena, but battling adversity has seen him come to the fore as a leader.

In many ways, his progress as a young midfielder mirrors that of Can, and an interesting summer awaits.

After a period as a utility man under Brendan Rodgers, Can has been sparked into life by Klopp, and currently stands as one of Liverpool’s best young players.

Like Goretzka, he is a bullish, physical midfielder able to fill in every role required, though while he has the ability to shine as a box-to-box option, his future is arguably as a No. 6.

Whether that is at Anfield, however, is up in the air, as there is yet to be a breakthrough in contract talks.

Liverpool began negotiations with Can’s representatives ahead of the 2016/17 campaign, after his key role on the road to the Europa League final, but 16 months later, he is yet to agree a deal.

This has left the Reds considering whether to include a release clause in Can’s contract, along with making him one of the club’s highest earners, or allow him to leave on a free transfer.

The decision may be made for them by January, with Juventus’ chief executive Giuseppe Marotta confirming their interest earlier in October.

And responding to this, Can explained that “it’s always an honour to receive an offer from such a renowned club.”

Having won the Serie A title in each of the last six seasons, Juventus are the biggest club in Italy; reaching two of the last three Champions League finals, they are also one of the biggest in Europe.

Presiding over a period of change, with the likes of Sami Khedira and Claudio Marchisio now in their 30s, Juventus could be a tempting project for Can.

And Liverpool’s interest in Goretzka suggests they are sizing up like-for-like replacements, with Paris Saint-Germain’s Adrien Rabiot also emerging on the radar of late.

Goretzka may be the more likely, with Klopp enjoying a positive relationship with Schalke sporting director Christian Heidel.

And it can be posited that Goretzka would be an improvement on Can, having overtaken his compatriot in Germany manager Joachim Low’s plans, starting seven of the last 10 games in midfield.

However, it is not a given that Goretzka would opt for a move to Merseyside, with the likes of Bayern, Barcelona and Chelsea providing stiff competition.

Liverpool have showcased the added sway Klopp has provided them in the transfer market of late, however, with the addition of Naby Keita and an informal commitment from Virgil van Dijk.

A move for van Dijk has so far failed to transpire, but it is telling that both he and Keita opted for Liverpool despite the possibility of joining the majority of top clubs around Europe.

If Goretzka follows suit, and the prospect of Klopp tempts him to make the move to Merseyside, he would of course be a fine replacement for Can: free transfer for free transfer.

But the ideal situation would be that both Can and Goretzka wear Liverpool’s colours next season.

It is not guaranteed that Can will leave next summer, and the Reds should be tying him down at all costs, with his finesse and physicality complementing the incoming Keita.

Shifting Can back into the No. 6 role on Keita’s arrival, with Goretzka taking up the other No. 8 position in Klopp’s three-man unit, would provide Liverpool with a truly top-level midfield.

This would be felt tenfold if Philippe Coutinho remains at Anfield, too, despite sustained interest from Barcelona.

Klopp’s interest in Goretzka is warranted, as he would bolster his midfield ranks significantly.

The hope is that he arrives as Can’s team-mate, and not his replacement.