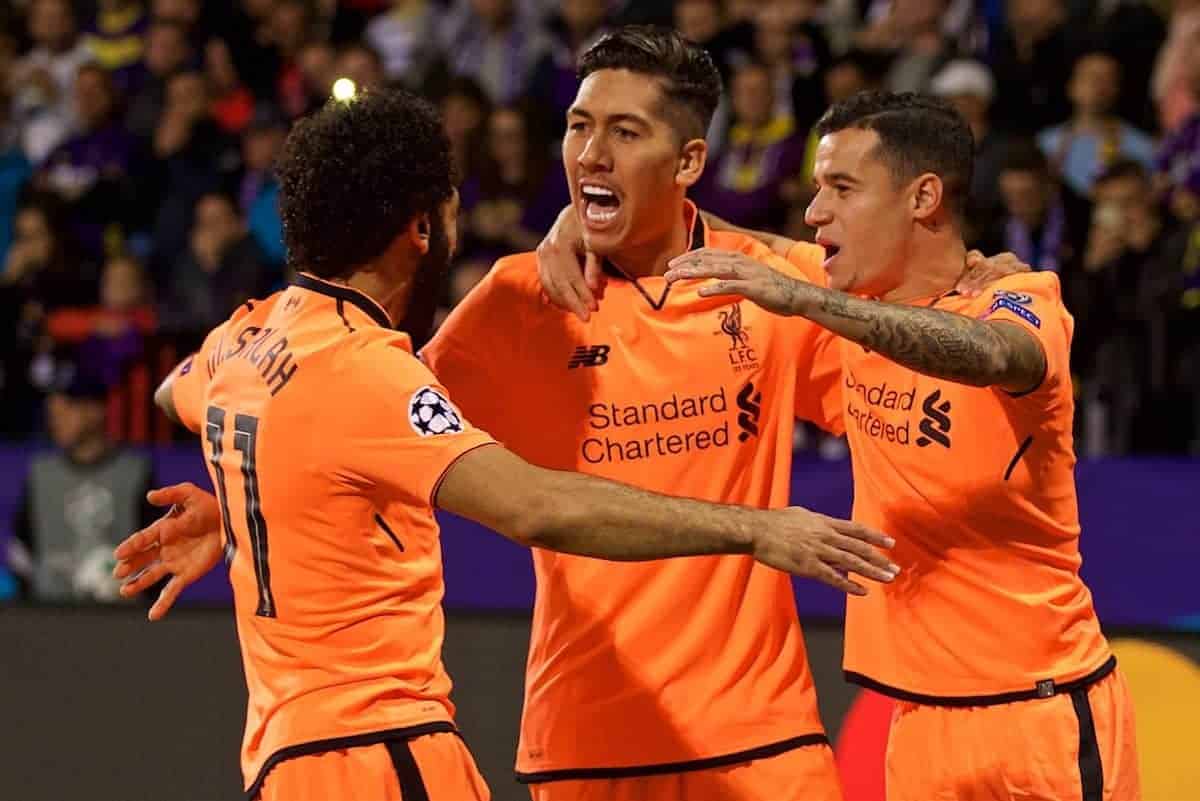 Liverpool were back to their brilliant attacking best on Tuesday night, as several Reds shone in their 7-0 mauling of Maribor.

Brought in for Simon Mignolet, as expected, Karius enjoyed a faultless night, albeit without ever being tested.

The 24-year-old showed good vision with an early pass slid into midfield, and he showed decent handling down low soon after.

Bigger tests will come his way in the Champions League this season.

Having been ousted by Joe Gomez at right-back of late, Alexander-Arnold came in and once again cut a mature figure in Europe.

He was crisp and incisive on the ball, and whenever he was tested in a defensive sense, he did his job. Finished off the scoring with a late deflected effort.

Such an impressive athlete.

Matip coasted through the game against very limited opposition, exuding quality with the ball at his feet and never looking tested.

That’s about all there is to say about his display, such was Liverpool’s dominance.

Much like Matip, this was not a match where we could gauge how good Lovren was, but it was refreshing to see him look focussed once more, as was the case against Man United on Saturday.

Unfortunate not to win a second-half penalty, having been kicked in the head.

Keeping his place ahead of Andrew Robertson, Moreno was again very impressive, as he enjoys the most unlikely of resurrections in a Liverpool shirt.

The Spaniard’s blistering pace was always an outlet down the left flank, and his precise cross allowed Mohamed Salah to make it 4-0.

Anyone not praising Moreno’s current form clearly has it in for him. With Jordan Henderson given the night off, Milner was given a rare start and he made the most of it in hugely impressive fashion.

The midfielder started well and shone from that point on, assisting Philippe Coutinho with an inch-perfect cross and always playing the right pass.

One of his best performances for the Reds, even though the quality of the opposition must be taken into account.

There were more noticeable Reds strutting their stuff in Slovenia, but Can was a dominant presence in the middle of the park.

Maribor’s midfielders couldn’t cope with the German’s power and general quality, and although he did nothing spectacular, he was a key cog in the wheel.

He looked like a leader throughout, and is maturing all the time as a footballer.

The 26-year-old didn’t need to be a standout performer, and he went about his business quietly but effectively.

He slacked off once defensively, almost allowing the hosts to grab a consolation near the end of the first-half, but it was a solid night’s work from Wijnaldum before he was substituted.

What a magnificent signing Salah is, and he is only going to get better.

It was the Egyptian’s speed and end product that allowed Roberto Firmino to open the scoring, and he added two more goals to his Liverpool collection to take his tally to eight already.

He completed 100% of his take-ons, before being replaced by Alex Oxlade-Chamberlain before the hour mark. Coutinho has been superb since returning to the side after his summer of flirting with Barcelona, and he was again influential on Tuesday night.

His ruthless volleyed finish made it 2-0 and he played a key role Salah’s second of the night, before almost taking the mickey at times after the break.

One trademark free-kick was saved, and some of his touches were a delight.

Firmino’s form hasn’t been the greatest of late, but he was superb against the Reds’ beleaguered opponents.

Not only did the Brazilian net twice, the second of which was a well-timed header, but he linked up with others beautifully and assisted Salah’s goal to make it 3-0.

He could have scored more if his finishing was truly top class, which was the one slight disappointment.

Volleyed over within 30 seconds of getting on the pitch, but got his first Liverpool goal with a well-taken late finish when put through by Sturridge. Positive cameo and a huge confidence booster for him.

Looks a fair way past his peak, sadly, but produced a lovely assist for Oxlade-Chamberlain’s goal.

No time to really make a proper impact.

A perfect night for the manager, who fielded a strong starting lineup and reaped the rewards for that decision.

The football Liverpool played was Klopp to a tee – quick passing, high energy and invention – and he was even able to bring off key men with plenty of time to spare.

He will be relieved to finally give an opponent a real hiding again – it’s been coming – but he will be aware that tougher tests lie ahead.