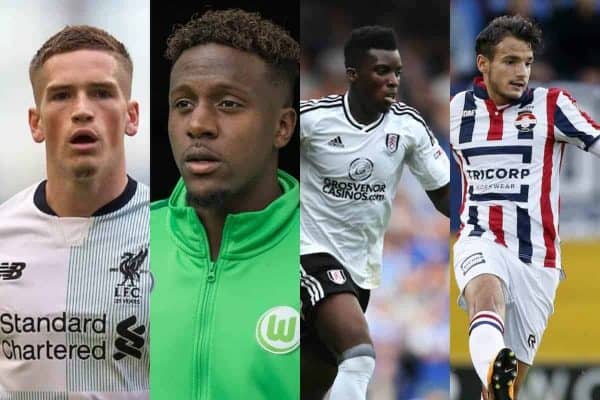 It was a frustrating week of limited game-time for Liverpool’s loanees, but positives came in Divock Origi scoring and Jordan Williams posting an assist.

Origi emerged from a difficult week at Wolfsburg with a goal to his name, as he netted a dramatic equaliser to rescue a point against Schalke in his second outing.

After a largely underwhelming display in a 1-0 DFB Pokal win over Hannover in midweek, Origi dropped to the bench for the first time this season for the Bundesliga clash with Schalke.

But the Belgian responded perfectly to being dropped by coming on and grabbing the priceless equaliser Martin Schmidt hoped for when introducing Origi with 13 minutes to go – which you can see here.

In the third minute of added time, Origi showed good determination to latch on to Mario Gomez’s knock-down inside the box, before steering the ball into the net from a tight angle on his left foot to make it 1-1.

It was a special moment for Origi, and one which will hopefully spark a more consistent level of performance.

Williams was again the only Football League loanee in action, with Toni Gomes and Shamal George both unused at Forest Green and Carlisle respectively.

And the midfielder was in influential form as he claimed his first assist of the season for Rochdale to help his side claim a 1-1 draw at Plymouth.

It must be said it was a slightly fortunate assist – as Williams’ scuffed shot from distance landed at the feet of teammate Matt Done, who controlled and finished from inside the box – but it was a direct contribution nonetheless.

Meanwhile, north of the border, Connor Randall endured a tough week at Hearts, involved in only one of the SPL side’s two games.

Randall made an instant return from a one-game ban to play in the Edinburgh derby against Hibernian in midweek, but it proved a night to forget as Hibs earned the bragging rights with a 1-0 win.

Randall played the grudge match in a right-midfield position and he struggled in the unnatural role – producing an ineffective display as the game seemed to go on around him.

The unimpressive performance resulted in Randall being dropped from matchday involvement completely against Rangers, with two upcoming academy hopefuls selected ahead of him.

It was disappointing given Randall’s form is not helped by the fact he has played almost every position but his own – denying him the chance to show his true capabilities – and you have to wonder what it’s doing for his confidence.

Productivity wasn’t much better for the loanees on the continent, but all of those across Europe did at least enjoy game-time.

Pedro Chirivella played back-to-back full games as he continues to be a mainstay of the midfield at Eredivisie side WillemII.

Chirviella kicked off with a hard-working performance to help his team progress in the KNVB Cup with a 2-1 win at Heerenveen in midweek.

The Spaniard and his teammates were unable to bring that winning form to the league on Saturday though – suffering a 3-1 loss to Ajax – but he was in positive form and arguably Willem’s brightest performer on the day.

The biggest surprise this week came with Taiwo Awoniyi, who was restricted to two substitute appearances at Royal Excel Mouscron.

Despite his rich vein of goal-scoring form, the striker had to settle for two half-hour cameos, the first coming in a 1-0 loss to Sint Truiden and the second in a 2-2 draw with Antwerp, with Awoniyi quiet on arrival in both.

Ryan Kent continues to see his game-time limited at Freiburg, with the winger playing only 45 minutes of a possible 180 for the Bundesliga side.

A DFB Pokal tie against second division Dynamo Dresden in midweek seemed an ideal chance for Kent to enjoy an extended run-out, but he was frustratingly an unused sub.

However, Kent did enjoy action in a 3-0 Bundesliga loss to Stuttgart, but it came in far from ideal circumstances as he entered with his team already 2-0 and a man down.

Kent had a thankless task operating as a lone striker, but he was in bright form as he showed some clever touches and almost scored with a clean left foot strike that flew narrowly over the bar.

Allan entered at half-time – by which time his side were already 4-0 up against the 10-man visitors – and he played from central-midfield in a complacent half in which two goals were conceded.

The 20-year-old will hope for a return to the starting XI for Europa League action on Thursday when Apollon host Serie A side Atalanta.

We’ll finish with another quick update on Naby Keita, who endured a miserable week at RB Leipzig as he suffered two defeats to Bayern Munich and was sent off in one.

Keita played only 53 minutes in the first game – a DFB Pokal tie which Leipzig lost on penalties – as he received a red card for the third time in his last seven games for club and country.

And though Keita managed to last the full 90 minutes on Saturday, Leipzig had to battle with 10-men for the second time in four days in Saturday’s league clash, which ended in a 2-0 loss.

Sheyi Ojo remains out of action at Fulham due to a dislocated shoulder.