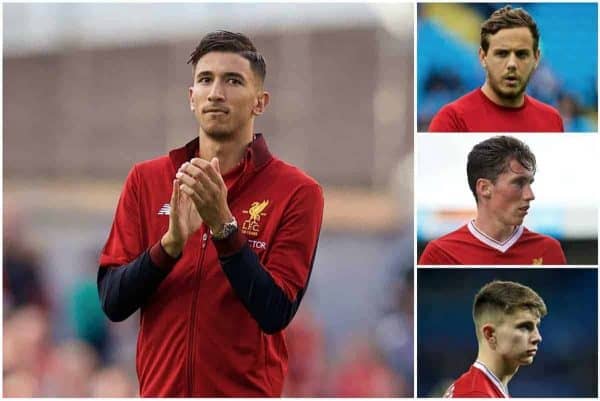 5 Liverpool players who would benefit from a January loan

As the January transfer window approaches, a number of Liverpool players could benefit from being loaned out until the end of the season.

It’s not long until transfers can be made again, with the Reds sure to be loosely linked to a plethora of footballing talent in the New Year.

Although much of the focus will be on incomings, most notably a potential deal for Virgil van Dijk, there are also some outgoings that make sense.

With Marko Grujic set to be loaned out in January in order to get more game time, here are five more Liverpool players who would benefit from the same.

The way in which Danny Ings has responded from two cruciate ligament injuries has been admirable, and his popularity at Liverpool is there for all to see.

The 25-year-old is making no headway in terms of first-team action, however, with the U23s very much his limit at the moment.

Given Ings’ age, and the fact that he has the quality to thrive up front for a lower Premier League team, a move elsewhere would be good for him.

Someone like Newcastle would benefit from his energy and goalscoring ability—Joselu is the Magpies’ joint-top scorer this season with just two goals—with his finishing prowess undeniable, even despite his injury woes.

It would be a gamble for someone to opt for Ings, but he has looked sharp enough of late to suggest he has plenty to offer, with four goals against Bristol City on November 5 catching the eye.

Although many supporters were tipping Ben Woodburn for regular first-team action this season, that hasn’t been the case at all.

His prodigious talent makes it understandable for so many to want to see him starring for Liverpool, but it is so easy to forget that he is just 18.

The Welshman has been restricted to just one cameo League Cup appearance in 2017/18, against Leicester City, and has only made four outings for the U23s.

Woodburn would benefit greatly from a short-term spell elsewhere until May, maturing as a player and returning a more rounded individual.

The Championship would toughen him up, and there would be more chance of him starting every week than at a Premier League club.

It is a logical next step in what could be a special career.

Harry Wilson finds himself in the tricky position where he is far too good to be representing Liverpool’s U23s, but also not quite trusted at first-team level.

It is almost embarrassing how easy the 20-year-old seems to find playing for Neil Critchley‘s youngsters—he has scored 11 and assisted five in 11 games this season—and he needs a new challenge.

Much like Woodburn, the Championship feels like an interesting, viable option, with the forward easily good enough to help a promotion-chasing team reach the top flight.

Physically, it may come as a bit of a shock, but he will improve far more as a player moving away from Liverpool, rather than coasting through U23 games.

The jury is out on whether Wilson will make the grade at Anfield—we will learn a lot more about him should he be loaned out.

Everyone has their opinion on who Liverpool’s best goalkeeper is, and with Simon Mignolet and Loris Karius both unconvincing, Danny Ward is picked by plenty as their preferred No. 1.

Klopp clearly doesn’t see it that way, however, with Mignolet and Karius selected for Premier League and Champions League matches respectively.

Unless injuries happen to strike the duo down, it is very difficult to see Ward getting any chances to shine this season.

He is far too accomplished a goalkeeper to be sitting on the sidelines every week, and as he has showed during loan spells at Aberdeen and Huddersfield Town, he can be a very influential figure between the sticks.

At 24, Ward cannot afford to let a key time in his career go to waste, and there should be both Premier League and Championship clubs keen on acquiring his signature.

One of the most forgotten players in the Reds’ squad, Jon Flanagan‘s time at his boyhood club must surely be close to its conclusion.

The 24-year-old’s career has hit a brick wall since suffering serious injury problems and joining Burnley on loan, and he is now restricted to rare outings for the U23s.

You can’t begrudge Flanagan for wanting to work at the club he loves every day, but he is not even remotely close to being part of first-team plans.

A brief spell away in January could then lead to a permanent move and first-team football—with all due respect to a very likeable individual, you just wonder what his level is now.