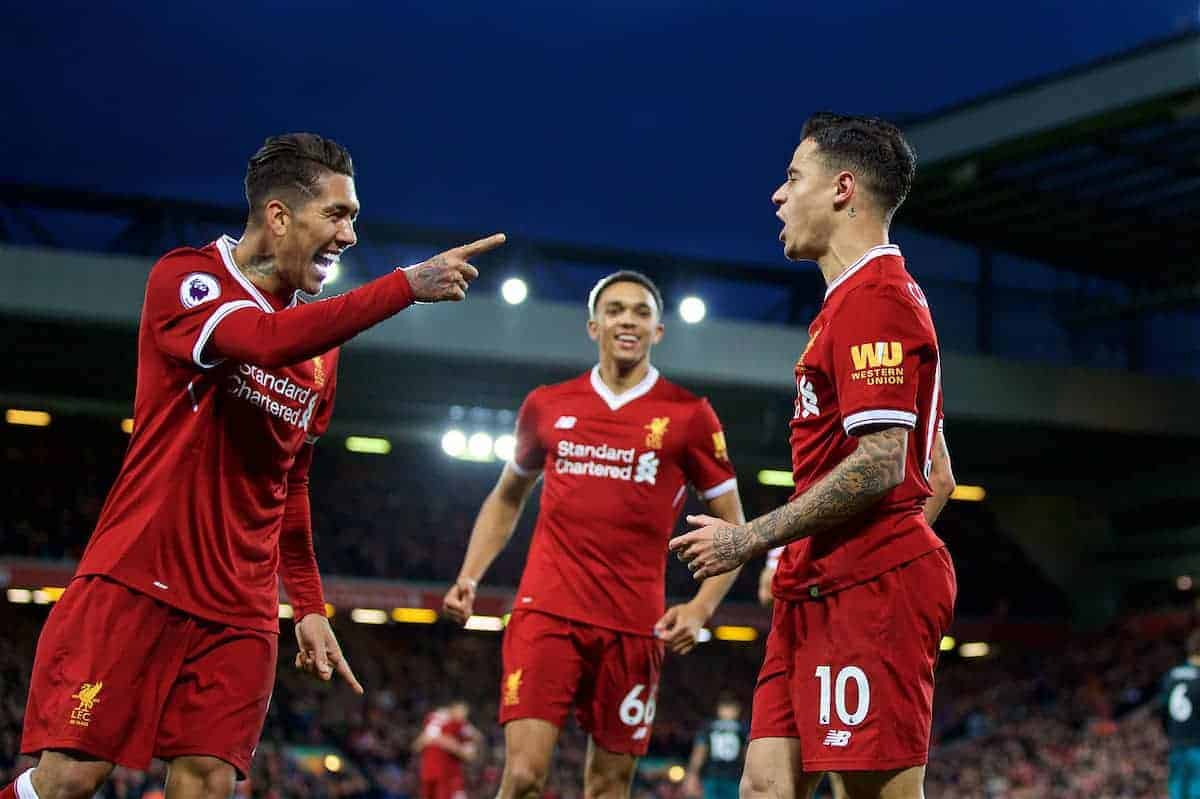 Liverpool supporters were left applauding Jurgen Klopp‘s side after their comfortable 3-0 victory at home to Southampton on Saturday afternoon.

Two goals from Mohamed Salah and a second-half strike from Philippe Coutinho earned the Reds their fourth consecutive victory, consigning a flat Saints side to a miserable defeat.

Klopp oversaw a strong all-round performance from Liverpool, who kept their third clean sheet in the last four games and dominated in every area.

After the final international break of the year, this provides the Reds with further momentum, having turned round a disappointing run of form this month.

After a slow start, Salah opened the scoring with a beauty…

“They don’t call him Egyptian Messi for nothing…damn!”

Salah worth at least double his transfer amount already, cracking business from the club.

At this rate, Mohamed Salah is going to be in the PFA team of the year. Sublime goal, another reason he has been the buy of the summer.

And the Egyptian added another before half-time…

That's why you play Coutinho in midfield. Wonderful creativity, quality goal by Mo.

“Surely the little Egyptian’s on for a hat-trick today.”

Mohamed Salah on course for the quickest contract extension in #lfc history.

I know he's only been here like four months but we need to give Salah a new deal. Not even joking.

Excuse me Mr Salah, but what are you made of? What a player we have!!

Coutinho scored the third on 68 minutes…

Brilliant little pass from Mane to get Firmino on. Forster saved his drive but Coutinho slots from about 12 yards. And he's off for Emre Can! 3-0

“Our season is picking up isn’t it? Smashing teams for fun and I LOVE it.”

One of our best performances this season

And full-time brought another resounding victory for the Reds…

Loved that, very mature performance. Every single player had a good game.

“Great result against a defensive team at Anfield, was fearing a draw.”

3-0 a true reflection of the game!!really enjoyed some great play?

Well that was enjoyable. Enjoy it.

“Salah is on another planet and what a player and easily MOTM, nice little run this is and who would’ve thought that would happen.”

Another clean sheet today for the reds! A brace for Salah, who now has 14 goals for @lfc… #LIVSOU pic.twitter.com/db3OMneuEd

five clean sheets in the last seven games. and five of the seven games saw LFC score three or more. get goals and the defense will follow. that's Klopp's Liverpool.

“Very comfortable game. We defended well, outnumbered them in midfield and were creative up front.

Liverpool have won three league games in a row for the sixth time under Klopp, but for the first time in almost a year (games 15-19 last season).

Liverpool have 22 points after 12 games for the third time in the PL era.
In one previous instance, the last 26 games yielded 60 points.
In the other, only 30 points. pic.twitter.com/MLNdyaR1Lb