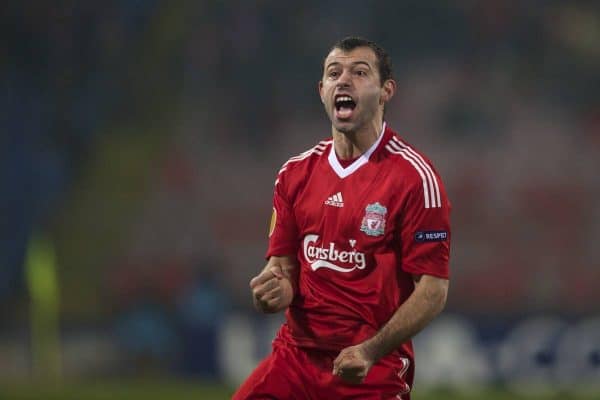 Many fans think Liverpool have never replaced Javier Mascherano since he left the Reds seven years ago and reports on Thursday claim he could return to Merseyside next summer.

The gritty Argentine midfielder enjoyed three and a half superb years at the club between 2007 and 2010, making up a third of the “best midfield in the world”, alongside Xabi Alonso and Steven Gerrard.

He’s often been linked with a move back to Anfield in recent years as he becomes a bit-part player at Barcelona, and such a link has again materialised this week – admittedly not from the best source.

According to Diario Gol, the 33-year-old may go back to Liverpool next year, with Lionel Messi fearful that his compatriot will leave Barcelona once 2017/18 is done and dusted.

Mascherano’s contract at Camp Nou runs until 2019, but it is understood that he will be allowed to leave on a free transfer next summer.

Fellow European heavyweights PSG and Juventus are reported to be interested in signing the 139-time capped Argentina international.

Although Mascherano turns 34 next June, just prior to the start of the World Cup in Russia, he still has plenty left in the tank.

He is as fit and dedicated as they come, and in terms of injuries, he has been fortunate throughout his career that has seen him win two Champions League crowns, four La Liga titles and much more.

It is unlikely that Mascherano will return to Liverpool, but if he did, on a free transfer, it would be a brilliant piece of business.

His character would be priceless in the dressing room, as well as his experience and win-at-all-costs attitude, and the Reds could easily get a couple of good seasons out of him.

The veteran wouldn’t necessarily be brought in as a regular, by any means, but he is someone who guarantees at least a seven-out-of-10 performance whenever he takes to the field.

Still at his best sitting in front of the defence, Mascherano has invariably played at centre-back for Barca, where he has shone alongside Gerard Pique.