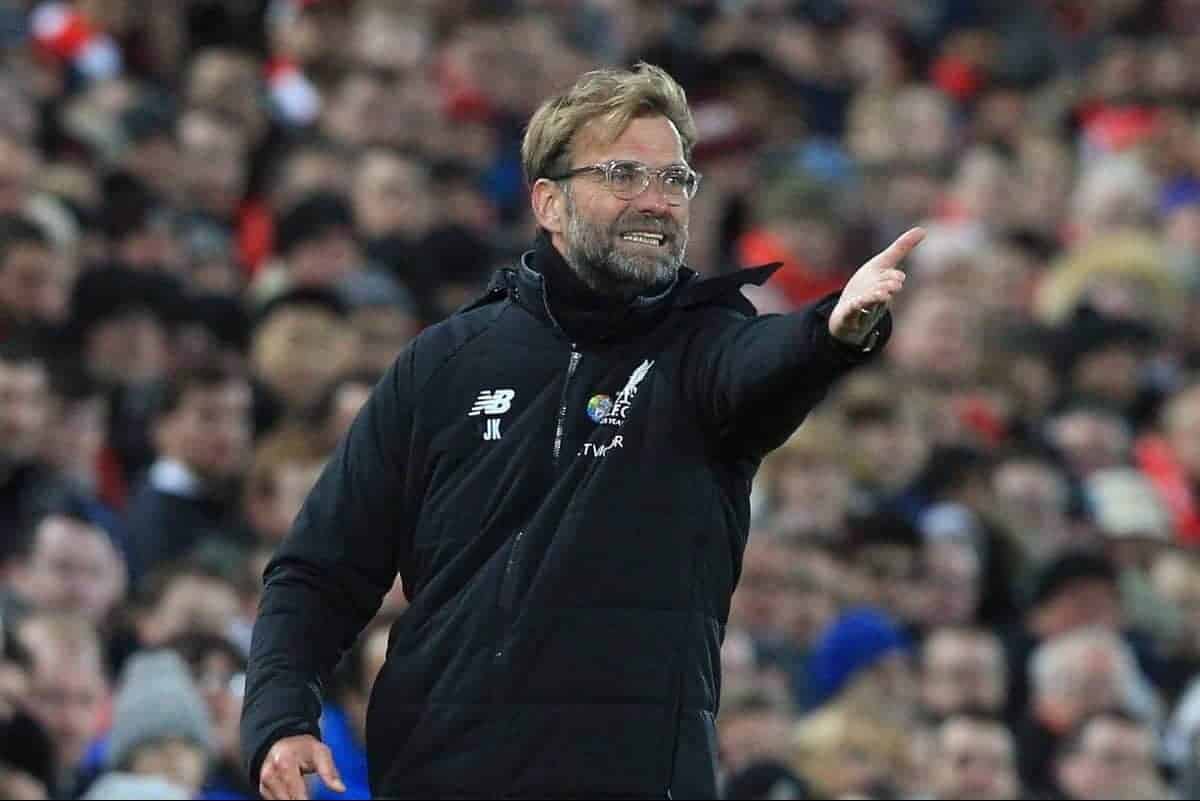 The media praised Mohamed Salah but were unimpressed with Jurgen Klopp’s rotation policy and slow substitutes in the 1-1 draw with Chelsea.

The Reds surrendered a lead and were held to a draw for the second successive game after a hard-fought contest at Anfield.

Salah netted his 15th goal of the season to break the deadlock against his former club, slotting home a composed finish at the Kop end.

But just as it appeared the perfect response to the Sevilla collapse would be produced, a lucky cross from Willian sailed over Simon Mignolet and into the net to deny the Reds all three points.

Despite a strong performance, frustration was the overriding feeling at Anfield having conceded so late, and here’s how the media assessed the stalemate.

Writing for Goal.com, Melissa Reddy believes Salah has “obliterated” any notion that he is a “Chelsea reject”:

With nine goals in his last eight games, and 10 in just 13 appearances in the league, Salah has obliterated any attempts to saddle with him the ‘Chelsea reject’ tag.

And what of Coutinho? Before the interval, other than that coming together with Hazard, it was difficult to spot him. Mohamed Salah was Liverpool’s beacon of light, the man who looked capable of taking the contest to Chelsea.

He was the biggest threat in red all day and showed his versatility as he switched wings with Oxlade-Chamberlain second half before ending up through the middle late on.

Some reporters bemoaned Liverpool’s inability to see out a lead, while others felt the Reds improved defensively

The Liverpool Echo’s James Pearce was among those to criticise game management, assessing the Reds “didn’t control the contest well enough”:

But the bottom line is that from the moment Salah bagged his 15th goal of a remarkable debut season at Anfield, Liverpool simply didn’t control the contest well enough.

Their game management was poor in Spain in midweek and it wasn’t much better here.

However, This Is Anfield’s Karl Matchett was among reporters who thought the back-four improved, and instead assessed the midfield as the problem:

In general, the back four was more organised, individually impressive and worked well as a unit.

The few other chances invariably came though from the midfield not closing down or protecting the spaces in front of the defence, while the back four themselves repelled everything in turn.

There was discussion on Klopp’s rotation and substitutions, with several reporters unimpressed by the German’s work Pearce strongly felt it was a bad decision from the boss to make the changes in such a key fixture:

Rotating the squad is understandable with the schedule Liverpool face but why choose one of the biggest games of the season to do it? The Reds went into a gun fight without two of their most lethal weapons.

Mane eventually came on late in the day, an 87th minute substitute after Chelsea had levelled the scores.

Really, he should have been used earlier; Klopp’s decision to replace Sturridge with Wijnaldum earlier had only helped Liverpool lose momentum and swing the game back in Chelsea‘s favour.

However, ESPN’s Mark Ogden noted a positive in how the rotated selection “enabled Liverpool to be more solid”:

But while it is unlikely that Klopp would have picked a team without Mane and Firmino had they been fit, his selection ultimately enabled Liverpool to be more solid and tough to break down.

Yes, they lacked pace on the counter-attack without Mane and Firmino, but the presence of Oxlade-Chamberlain in the team gave Liverpool a more durable look.

The decision to retain Alberto Moreno was also discussed, and Richards believes Klopp made the right call in keeping the Spaniard:

It appears Klopp likes the balance Moreno brings down the left, his speed in transitions and his comfort on the ball.

In a game against a Chelsea side playing 3-5-1-1, where both Liverpool full-backs would be afforded space to push into and carry the ball, it made sense to stick with the Spaniard.

Meanwhile, Matchett was impressed by Moreno’s bounce back performance:

The left-back was strong in the challenge, consistently on the front foot to get the Reds moving forward and diligent about tracking runs.

One or two moments might have had fans wondering if there was impending danger as he slid into a tackle or attempted to dribble away from his box, but Moreno had matters under control for the vast majority of the match. Matchett thought Alex Oxlade-Chamberlain presented the best argument for more regular game-time out of the irregulars:

It was a mixed afternoon for the three incoming players, with Oxlade-Chamberlain making the best case for future inclusion.

He showed great work rate tracking back in the first half, was quick to challenge high upfield and looked to get past his man whenever possible, with varied success.

Writing for ESPN, Steven Kelly was unimpressed with Daniel Sturridge, assessing how the striker makes Klopp’s side “less creative”:

Another disappointing start for a striker who looks out of place. His presence automatically makes Liverpool less creative and, thus, less likely to supply him with chances.

This Is Anfied’s James Nalton thought James Milner was “off the pace”:

Made the odd important intervention in defence, and most of his passes found their man, but there were a couple of occasions where he was unable to tune into the same wavelength as those around him.

The stats might show him in a good light, but in the very cold light of Anfield he looked off the pace and out of sync.

The Guardian’s Andy Hunter was impressed by the defensive effort and understanding from the rotated Reds, but felt attacking threat lacked:

Liverpool’s collective effort impressed, particularly when covering for each other defensively and regaining possession quickly, but they struggled to turn territorial advantage into a clear sight of Thibaut Courtois’s goal.

King thought Liverpool allowed Eden Hazard to dominate too easily, and should have put a man-marker on Chelsea’s play-maker:

Quite why Liverpool were so content for him to have such room, rather than putting a chaperone on Hazard, was just as perplexing.

They were fortunate not to have been pummelled because Hazard was in the kind of mood that suggested, eventually, he would win this game on his own.

Matchett discussed the contrasting displays of either midfield, and felt the Reds should have learned two key aspects from the visitors’ central unit:

One is the runners from deep; Tiemoue Bakayoko and (in particular on the day) Danny Drinkwater made huge volumes of surges from deep, unmarked and untracked, into the opposition penalty box. It doesn’t happen often enough with the Reds’ central options, which can leave a sole centre-forward to attack the ball.

Secondly, the off-the-ball shape of Liverpool’s midfield zone continues to be a shambles at times, struggling to defend against through-passes or counter-attacks.