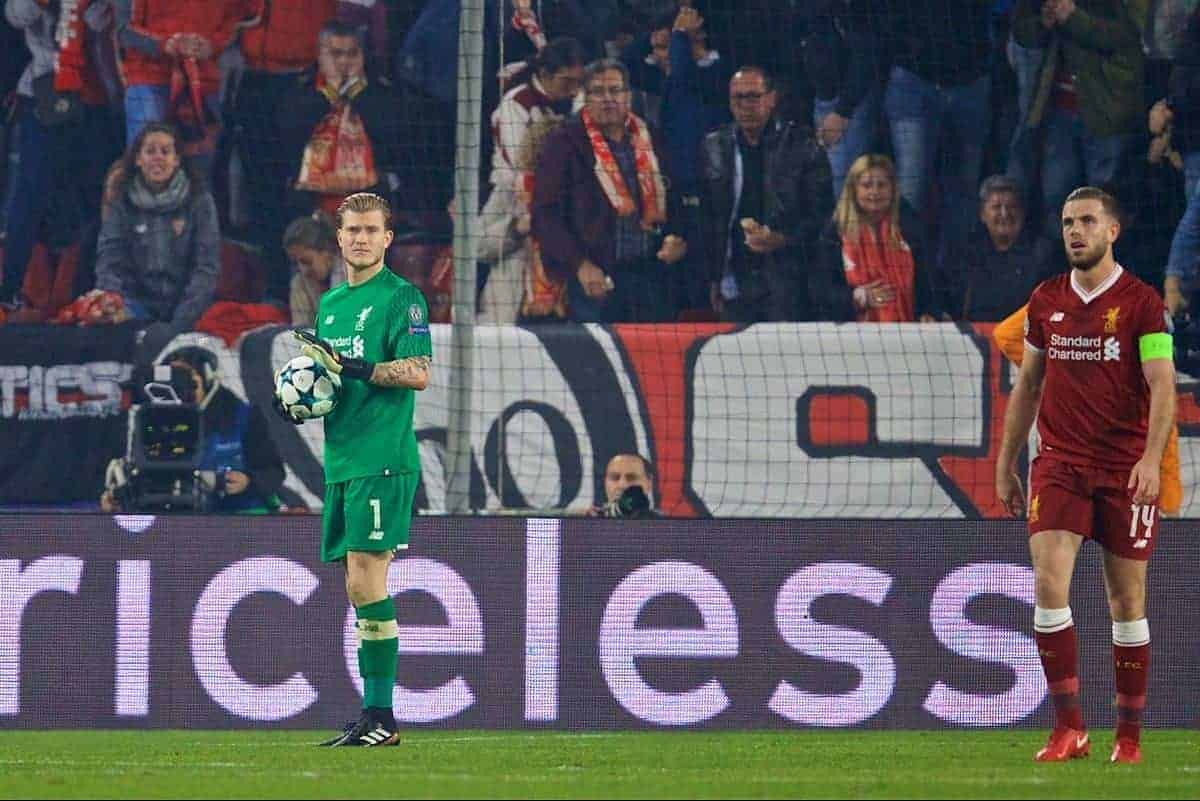 Liverpool endured a game of two halves as they saw a three-goal lead slip as they were held to a 3-3 draw away to Sevilla in the Champions League.

The Reds took to the Estadio Ramon Sanchez Pizjuan on Tuesday night looking to book their place in the last 16 of the Champions League.

Flying to Andalusia knowing that three points against Sevilla would be enough to progress, Jurgen Klopp‘s side will have been determined to extend their winning run to five games.

Buoyed by consecutive victories over Huddersfield Town, Maribor, West Ham and Southampton, and a raft of returning absentees, the Reds headed down the tunnel with a formidable lineup.

Klopp made just two changes to the side that won 3-0 at home to the Saints on Saturday, including the return of Joe Gomez.

Having drawn with Sevilla back in September, Liverpool’s midweek jaunt was set up to be a tough contest, and it certainly proved to be. After the U19s scored within 30 seconds in their 4-0 win over Sevilla earlier in the afternoon, the Reds got off to the perfect start at the Ramon Sanchez Pizjuan.

With Philippe Coutinho sending in a swinging corner, Georginio Wijnaldum nodded the ball across the box for Roberto Firmino to fire home at the far post and make it 1-0 after just 88 seconds.

The Reds were cut open twice in quick succession on the 20-minute mark, with Nolito first denied by an excellent save by Loris Karius, while Wissam Ben Yedder somehow skewed wide shortly after.

Jordan Henderson sent Firmino on the break minutes later, but the Brazilian was denied his second of the night by a strong save from Sergio Rico.

From that corner, however, Liverpool extended their lead, with Sadio Mane finding the back of the net with a diving header in a carbon copy of the first goal.

The two goalscorers combined on the half-hour to put the Reds even further ahead, with Mane’s effort on the break pushed into the path of Firmino for a no-look finish and 3-0 at the break. Alberto Moreno, ever-present for Liverpool in the Champions League this season, endured a hit-and-miss night on his return to his former club.

It was the Spanish left-back who conceded a sloppy free-kick six minutes into the second half, allowing Ever Banega to whip the ball in for Ben Yedder to glance into the far corner.

And Moreno was again in the thick of it as his poor touch led to a foul on Ben Yedder in the penalty area, with the Frenchman stepping up to reduce the deficit further.

Klopp responded by withdrawing both Moreno and Coutinho, sending on James Milner and Emre Can in their places in an attempt to shore things up in both midfield and defence and secure the victory.

The Reds slowly got back into the game, and Mohamed Salah found himself with a good chance on 70 minutes, with the Egyptian’s effort blocked for a corner.

Mane was then in a great position to put the game beyond doubt as Can was sent through, but Banega charged back to make a fine stop as the German clipped in his cross.

The Senegalese was subject of a penalty shout late on, but Sevilla had the last laugh, with Guido Pizarro smashing home a loose ball from a corner to seal a 3-3 draw.