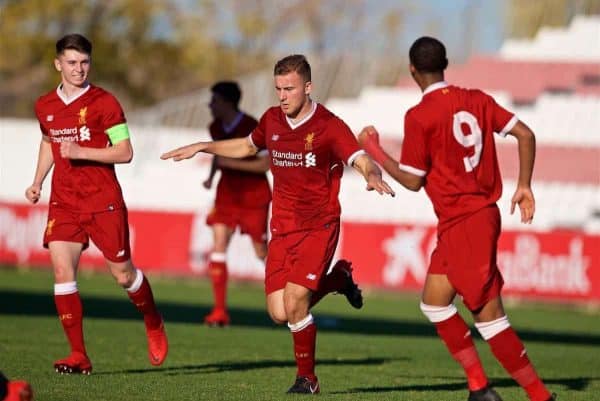 Steven Gerrard’s Liverpool U19s produced an excellent display to seal progress to the last 16 of the UEFA Youth League, winning 4-0 at Sevilla.

The young Reds faced off against their Seville counterparts behind closed doors on Tuesday afternoon, as they continued their UEFA Youth League campaign.

Gerrard’s side earned a strong, 4-0 win over the Spanish youngsters in their opening group game, before following up a loss to Spartak Moscow with back-to-back victories over Maribor.

Speaking ahead of the game, Gerrard described it as “the key game in the group,” with three points at the Estadio Viejo Nervion enough to secure progress to the last 16.

And the legendary midfielder named a strong side in Andalusia, including Wales international Ben Woodburn, who captained the U19s in midfield.

They were celebrating within 30 seconds, as Liam Millar latched onto a sloppy pass, following some great pressure from Rhian Brewster, to send the ball past Alfonso Pastor to make it 1-0.

Liverpool continued to dominate in the early stages, with the presence of Millar and Brewster on the shoulder of Sevilla’s high defensive line proving useful.

The home side did produce some dangerous movements in attack, but the stoic efforts of centre-back George Johnston, including one phenomenal sliding tackle, kept the young Reds in front.

Keeping up the pressure against an aggressive Sevilla side, Liverpool made it 2-0 just before half-time.

With Woodburn and Herbie Kane both standing over a free-kick 30 yards out, the latter saw his effort deflected to loop beyond Pastor and cap a bright 45 minutes.

After their excellent start to the first half, the young Reds got another on the scoresheet just six minutes after the interval.

With left wing-back Adam Lewis roving down the flank, the Scouser sent in a beautiful cross from deep to find Brewster at the far post, with the 17-year-old able to volley home for 3-0.

Millar had a great opportunity to grab his brace, but his effort was blocked in the penalty area, before Gerrard opted to withdraw the Canadian, sending on Bobby Adekanye.

The tricky Mohamed Diouri almost crafted an opening in the Liverpool penalty area, weaving through a host of bodies, but the Moroccan came too close to Kamil Grabara, who was quick off his line to collect.

Brewster threaded Adekanye for a chance in the closing stages, before Jose Alonso hammered the inside of the post at the other end.

Sevilla paid the price for their hostile approach, with Enrique Rios sent off for a second yellow after fouling substitute Paul Glatzel, before Adekanye burst through to finish at 4-0.

Is Klopp Taking the Right Path With Woodburn?

This was Woodburn’s ninth appearance of the campaign in all competitions, with Jurgen Klopp‘s approach to his development, perhaps inadvertently, hampering the 18-year-old’s game time.

While he has regularly trained with the first team, Woodburn has made just one outing for the senior side in the League Cup, with another game as an unused substitute in the league.

And for the U23s and U19s, he has made eight appearances out of the possible 19 games, despite arguably being Liverpool’s standout academy talent.

There are few opportunities for him at first-team level due to the competition for places under Klopp, but surely Woodburn would be better served with further game time on the youth stage?

While Liverpool’s academy sides have often replicated the first team on a tactical basis in recent seasons, Gerrard’s first campaign with the U18s and U19s has seen him as a pioneer.

The 37-year-old has adopted a 3-4-3 system, and it has allowed him to get the most of his talents.

Lewis’ deployment as a left wing-back provides the youngster the opportunity to forge forward, while Rafa Camacho‘s apprenticeship on the opposite flank has urged him to take responsibility.

Rhys Williams is growing in the role as a dominant central defender, while the midfield tandem of Kane and Woodburn played with a fine balance of industry and creativity.

Most importantly, this system gives Gerrard the option of fielding three forwards in free roles, and the likes of Millar, Brewster and Curtis Jones are thriving as a result.

Man of the Match: Herbie Kane

Kane celebrates his 19th birthday on Thursday, and the ex-Bristol City midfielder is enjoying a breakthrough campaign in 2017/18, after spending most of last season on the sidelines.

He looks to have completely overcome his injury problems, playing with a fierce tenacity and slick technical quality, as well as finding the back of the net from a free-kick.

Having already trained with Klopp’s squad during the October international break, and taking the armband off Woodburn late on, Kane will be hoping to make the step up on a more regular basis soon.