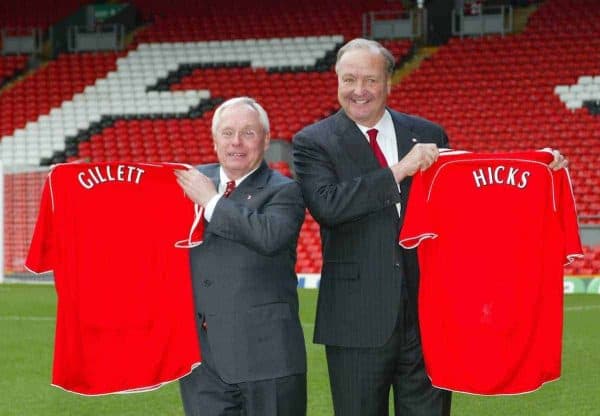 Mill Financial’s claim against the Royal Bank of Scotland and former Liverpool owner George Gillett over the sale of the club has been dismissed.

The American company sought to buy Liverpool from under the noses of Fenway Sports Group back in 2010, but felt they were dealt “substantial damages” having failed to do so.

John W. Henry and Tom Werner became co-owners just over seven years ago, liberating the Reds from the disastrous reign of Gillett and his partner Tom Hicks.

But Mill Financial, who claim they had offered to raise any bid for the club by £20 million, up to £385 million, feel their efforts to broker a deal were undermined.

This came due to “secret letters” and “clandestine activities” on behalf of RBS, who moved to expedite the selling process, with Mill Financial of the belief they were unduly overlooked.

Gillett is also said to have borrowed $70 million from the company, though he has been paying back £125,000 a month.

But as sport business expert Dave Phillips revealed on Thursday evening, the New York Supreme Court have ruled the claims to have been “dismissed and discontinued.”

It's finally over. Mill Financial's legal action against RBS relating to the sale of #lfc to FSG has been dismissed and discontinued in its entirety. pic.twitter.com/Zar2yV8ika

Though neither Liverpool or FSG were involved in the proceedings, this lifts another cloud from over the club.

Back in 2012, Liverpool agreed an out-of-court settlement with Hicks and Gillett over its sale to FSG.

According to the Independent, they claimed that RBS, former Reds officials Martin Broughton, Christian Purslow and Ian Ayre “conspired to sell the club at a reduced price.”

From a supporter’s perspective, the end of Hicks and Gillett’s reign was a major positive, as their poisonous ownership had brought the club to the brink of administration.

Hicks later called it an “epic swindle” – some may say it was epic justice.