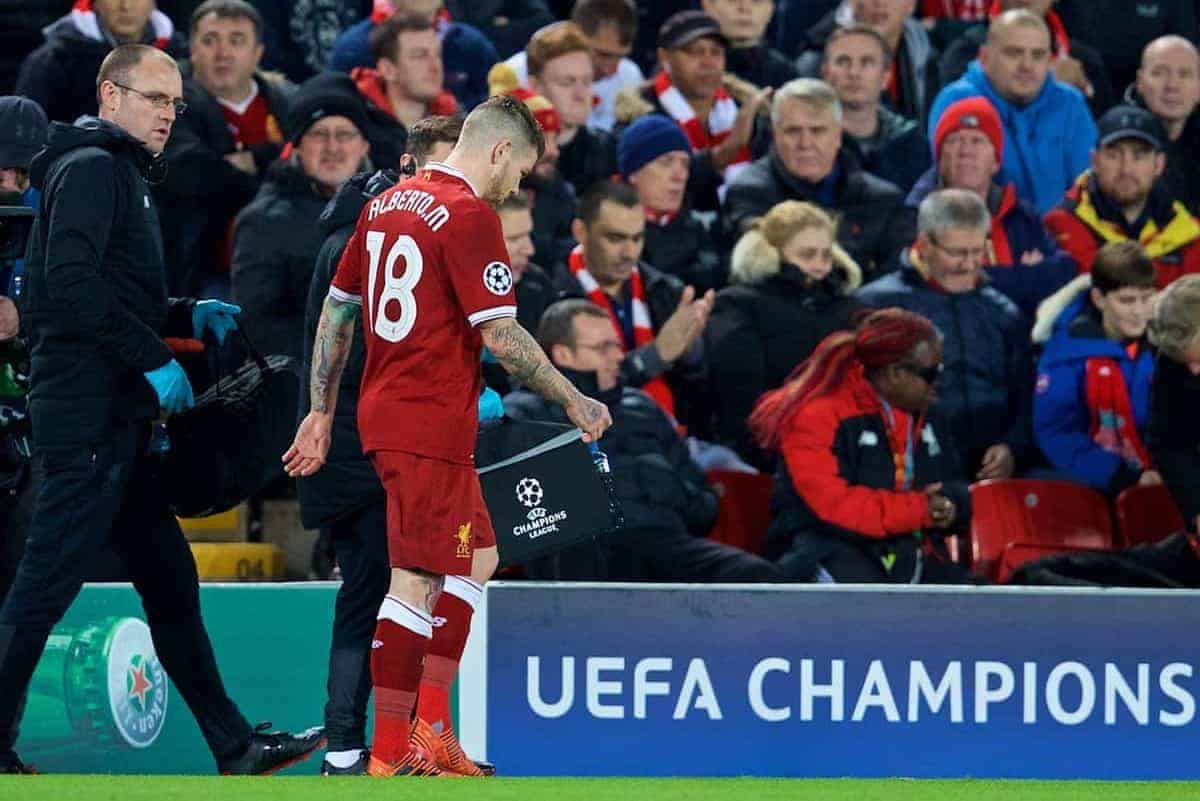 Jurgen Klopp has ruled Liverpool left-back Alberto Moreno out of Sunday’s Merseyside derby at Anfield, with the Spaniard suffering an ankle injury.

Moreno was forced off the field midway through the Reds’ 7-0 win at home to Spartak Moscow in the Champions League on Wednesday night, heading down the tunnel with tears in his eyes.

Amid messages of support from his team-mates on social media Moreno began treatment on Thursday, as the club assessed the extent of his injury.

It was widely expected that the 25-year-old would miss Sunday’s clash with Everton, with either James Milner or Andrew Robertson taking his place in Klopp’s starting lineup.

And speaking to Sky Sports on Friday morning, Klopp confirmed that Moreno would miss at least a week of action.

But as he elaborated, it seems more likely that the No. 18 could remain sidelined for the rest of the year, given Klopp’s uncertainty on his return.

“We need to have further assessment. I cannot say much about it,” he told reporters.

“It’s a very rare thing. So far the specialists aren’t sure [how long he’ll be out for].

“Not Everton, but if it’s in a week or so or a little bit longer we have to wait for that. There’s a little damage around the tendons.” After Everton (December 10), the Reds play West Brom (December 13) and Bournemouth (December 17) in the space of a week.

Moreno has been in excellent form so far this campaign, reclaiming his role as Klopp’s first-choice left-back to make 20 starting appearances.

This has kept summer signing Robertson in the stands, with Klopp preferring to call upon the more versatile Joe Gomez and Trent Alexander-Arnold on the substitutes’ bench.

Sunday will likely see Klopp keep faith in Milner, given his suggestion that derby experience is vital, but Robertson may well be given an opportunity at Anfield in midweek.

The Scotland international has made just four outings for Liverpool so far, but has produced some encouraging displays on the left flank.

An away clash with a West Brom side under new management in Alan Pardew could be the perfect time to give Robertson a chance before Moreno makes his recovery.