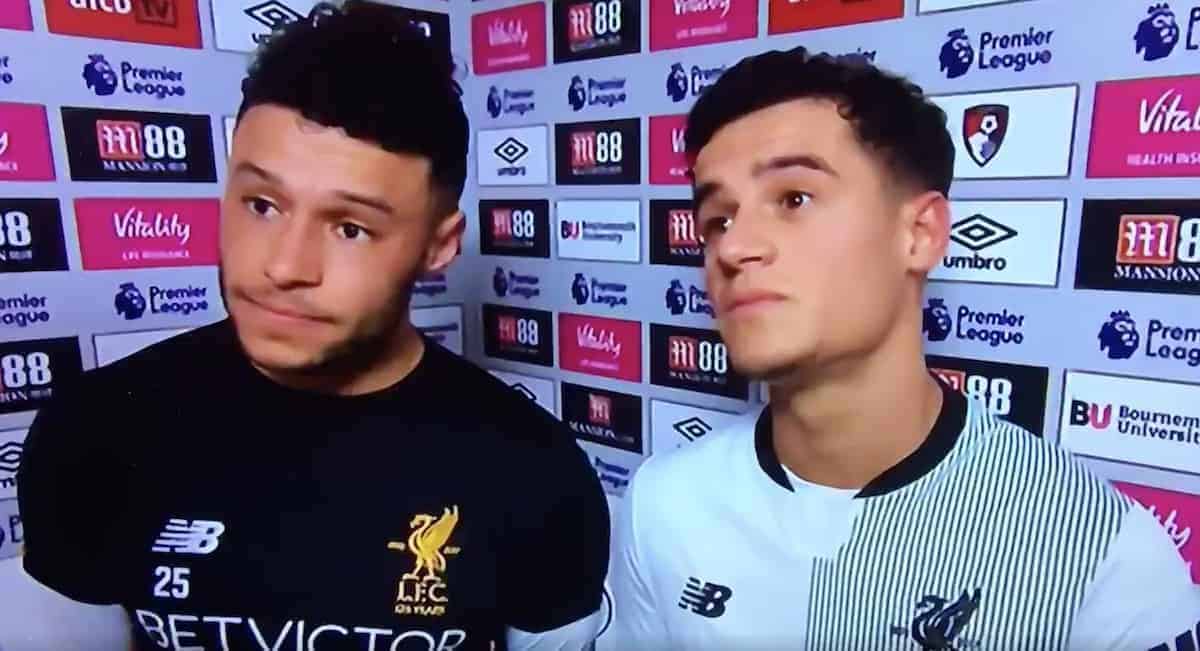 Alex Oxlade-Chamberlain defended team-mate Philippe Coutinho from questioning over his future in a post-game interview on Sunday.

Liverpool soundly beat Bournemouth 4-0 at the Vitality Stadium, with both men key performers in a fine attacking display.

The Brazilian scored one, set up another and struck the woodwork in another mercurial display—but it was Oxlade-Chamberlain who scooped the man of the match award.

A midfield performance full of running, aggression and creativity meant it was a deserved accolade for the summer signing, and after the final whistle he showed his influence wasn’t limited to just being on the pitch.

With both Reds cornered by Sky Sports for a post-game interview, Coutinho was once more questioned over his immediate future.

To his credit the No. 10 refused to be drawn, citing happiness at playing and reaffirming that he gives his all—but then his team-mate stepped in to shoot down the constant probing.

“I always say the same thing. I try to enjoy the moment,” said Coutinho in a rare interview speaking in English when Sky cornered him on his future.

“I like to play football and, every time when I go on the pitch, I try my best.”

Oxlade-Chamberlain interjected expertly to defend his team-mate: “He’s a Liverpool player right now and he’s doing really well for us.

“He’s been the most professional person I’ve seen all season. He’s been top quality from the start and every time he gets on the pitch he does his all for the club and that’s the most important thing right now.

“It’s not fair to ask those kind of questions I don’t think.

“He gives his all every game and that’s all we can ask from him.”

Watch Alex Oxlade-Chamberlain leap to Philippe Coutinho's defence when asked about rumours of a transfer to FC Barcelona! ? pic.twitter.com/1OSKpoSGVA

Oxlade-Chamberlain’s decision to intercede on his team-mate’s behalf has gone down extremely well with the Reds’ fanbase on social media.

Alex Oxlade-Chamberlain continues his impressive display through to the post-match TV interview. He interjects as Phil Coutinho is asked about his future and supports his team-mate, highlighting the Brazilian's professionalism and labelling the question unfair.

Aside from taking on responsibility for the situation himself, something too many footballers are keen to avoid in interviews, it clearly shows the togetherness of the squad at present.