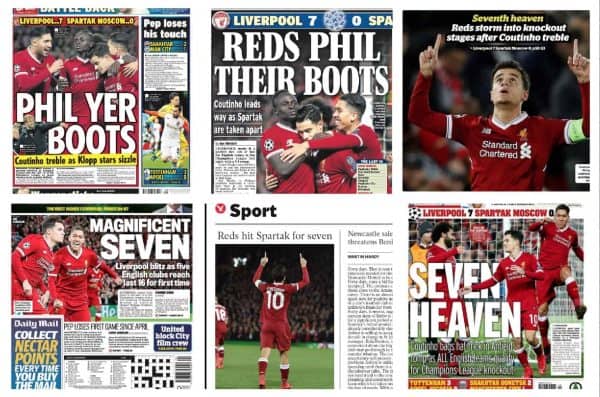 The media praised Liverpool’s attacking play in the 7-0 rout of Spartak Moscow and believe the Reds took another step in development by reaching the last-16.

A sensational performance of attacking football confirmed the Reds’ place in the knockout stage of the Champions League for the first time since 2009.

A hat-trick from Philippe Coutinho, brace from Sadio Mane and strikes apiece for Roberto Firmino and Mohamed Salah did the damage as the ‘Fab Four’ produced a stunning display.

It was a magnificent performance from the Reds who more than held their nerve on what could have been a tense night, and it was the perfect preparation for Sunday’s Merseyside derby showdown.

Here’s how the media assessed a sensational night at Anfield.

Their gifts, so varied and in sync, meant the almightily impressive scoreline was still flattering for the visitors. It could have been more and it would have been deserved.

The Telegraph’s Jason Burt hailed reaching the last-16 is a “significant landmark” for Klopp’s developing side:

More importantly, for Liverpool, it is the first time they have reached the Champions League group stages since 2009 and it felt like a significant landmark for them, having fallen short in 2010 and 2014, ahead of Sunday’s Merseyside derby.

Meanwhile, the Liverpool Echo’s Andy Kelly noted how the group stage has provided a vital learning experience for the Reds, as well as a successful one:

While the presence of Sevilla meant the Reds could take nothing for granted in terms of winning Group E, their return to Europe’s premier competition was undoubtedly aided by a kind enough draw.

It meant they were able to learn on the job again at the highest level without any mistakes proving too costly.

This Is Anfield’s Henry Jackson credited the boss for producing such a “fearless style of play”:

Klopp has Liverpool playing some of their best football in years and he deserves so much praise for masterminding such a fearless style of play.

The Mail’s Ian Ladyman felt Liverpool showed “exhilarating basics of the Klopp prototype” and thought the performance illustrated something special is brewing:

This is why Jurgen Klopp was brought to Anfield, and this is why as long as the German stays there will always be hope that something special may eventually be built on Merseyside.

There are currently flaws in Klopp’s grand design – the Premier League table tells us that – but here on a cold Anfield night were the exhilarating basics of the Klopp prototype. Energetic, intuitive, hypnotic passing football with a devastating cutting edge.

The Liverpool Echo’s James Pearce believes the Reds are better prepared to succeed this time around due to having Klopp at the helm:

Three years ago Liverpool squandered the opportunity when they returned to the Champions League. They looked out of their depth and had a manager who was a rookie in European terms.

Now they have the required class both on the field and in the dugout to shine at this level. Klopp knows what it takes. Those two-legged ties brought the best out of him tactically en route to the Europa League final in 2016 and Liverpool are on the march under him once again.

As you would expect, reporters eulogised over the Reds’ attacking play – and the ‘Fab Four’ in particular

The Mirror’s David Maddock believes the Reds’ fire-power means the Reds will carry the Reds far into the competition:

On this form, with this ¬ruthless mentality, the attack looks virtually unstoppable, and even with a vulnerable defence they have the fire-power, the intimidating threat, to go far this season.

Pearce believes the display will have struck fear into Evertonians ahead of Sunday’s derby:

Their blistering pace, intelligent movement and lethal finishing will have been enough to give Evertonians cold sweats ahead of Sunday’s Merseyside derby.

Jack Austin, writing for the Independent, thinks the Reds will boast one of the “most exciting” attacks in the competition come February when Adam Lallana is also back to fitness:

Add the nearly fit-again Adam Lallana to that mix and suddenly you have one of the most exciting attacks left in the competition.

Meanwhile, the Independent’s Mark Critchley thinks not even Man City’s attack as is good as Liverpool’s:

Few of the others, perhaps not even Manchester City, can claim to have an attack as devastating as the one at Jurgen Klopp’s disposal.

A captain’s display no doubt.

This Is Anfield’s James Nalton thought Coutinho fully merited being awarded the captaincy:

Coutinho has captained Brazil in the past as part of their manager Tite’s policy of rotating the armband, but there was no question that the No. 10 was Liverpool’s captain on merit and it was not a random selection.

Looking deeper into Klopp’s decision to hand Coutinho the armband, Austin thought the boss sent a clear message to Barcelona:

Barca have made noise about having the finances to go back in for Coutinho in January with the playmaker still believed to want the move to the Catalan capital but Klopp’s move in handing him the armband suggests his and the club’s stance has not altered from the summer.

They still see Coutinho as their main man, and they’re making sure Barca know it.

Nalton assessed the starting lineup as Liverpool’s strongest despite the absence of Jordan Henderson, and thought the performance proved as much:

Jurgen Klopp’s team selection led to suggestions that this XI was his best lineup.

Some may prefer different faces in the centre of defence, and Joel Matip is widely considered the club’s best centre-back, but aside from this the team looked like Liverpool’s strongest, at least on paper.

Austin noted how Klopp’s side coped far better with a commanding lead, and assessed this improved know-how will be crucial for the latter stages:

Klopp has consistently rebuffed suggestions of a mental fragility within his squad and on this occasion his team illustrated their ability to manage their advantage through to the final whistle. That kind of discipline will be critical when they come to the two-legged knockout stage ties ahead.

Pearce praised Liverpool for “delivering when it mattered”:

The Reds had made hard work of Group E – throwing away leads home and away to Sevilla, and wasting a stack of chances in the draw away to Spartak. But when it really mattered, they delivered and it’s another significant milestone in Klopp’s reign.

Finally, the watching journalists discussed Liverpool’s aims and chances of success for the competition ahead

Reddy was among numerous journalists who assessed the Reds proved they can compete on this stage:

Liverpool couldn’t have sent out a clearer message as they reached the last 16 for the first time since 2008/09 – this is not simply a stage they belong on, but one they also intend to use to show off the full extent of their artillery.

ESPN’s Mark Ogden believes Klopp’s side have proven themselves “a dangerous outsider”:

With such attacking quality in their squad, Liverpool will be a dangerous outsider.

But Liverpool’s cutting edge, plus the legendary Anfield atmosphere on European nights, will give them hope and belief against any opponent.

For all the talk of frailty in both mind and body, there is one quality that makes Liverpool genuine Champions League contenders: goal threat.

Finally, Reddy believes Liverpool will be the team all potential opponents want to avoid in Monday’s last-16 draw:

Basel, Bayern Munich, Juventus, Shakhtar Donetsk, Porto and Real Madrid are the potential opponents and none of them will want Monday’s draw to result in them having to devise a plan of containment for Liverpool’s ‘Fab Four’.