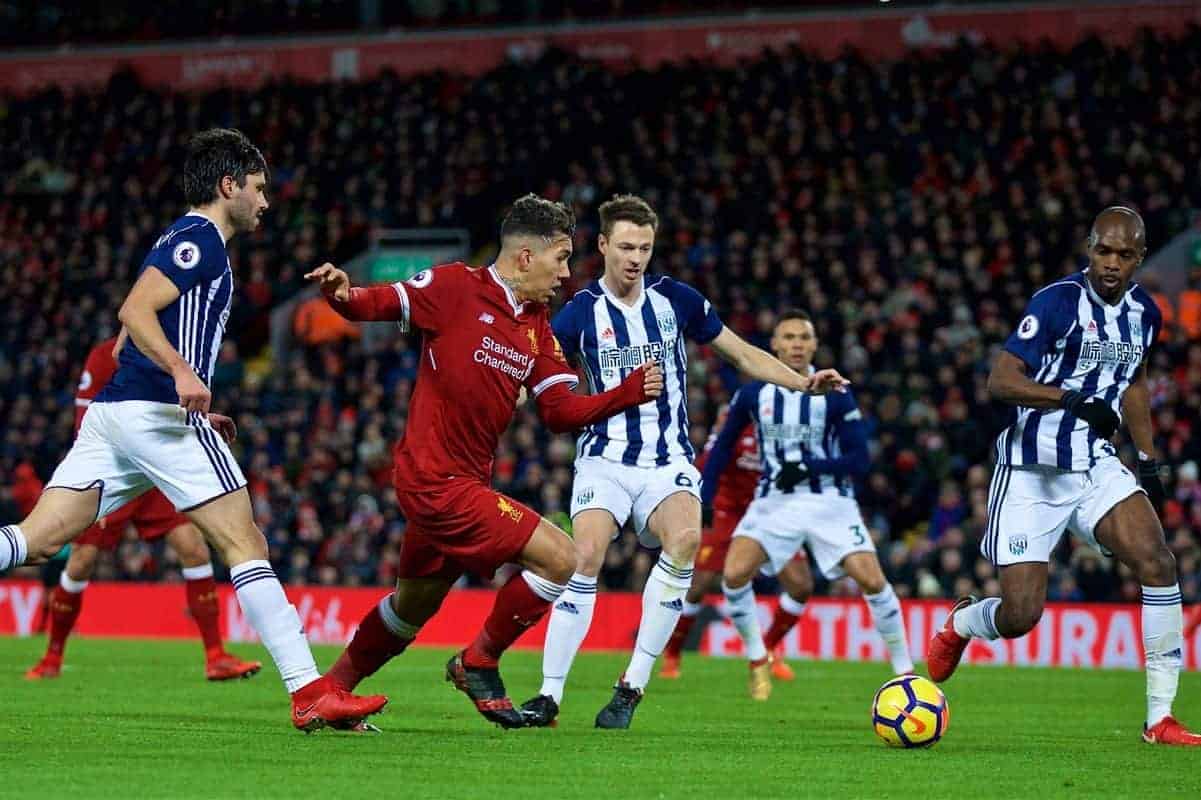 Liverpool supporters were left with a familiar feeling of frustration after Jurgen Klopp‘s side were held to a 0-0 draw at home to West Brom.

The Reds headed out at Anfield on the back of a disappointing stalemate in Sunday’s Merseyside derby, with Klopp restoring the ‘Fab Four’ to his starting lineup hoping for improvement.

But with the Baggies holding firm, Liverpool were unable to find the breakthrough they needed, with Dominic Solanke finding the back of the net only his effort to be ruled out for handball.

This draw leaves Liverpool having extended their unbeaten run to 11 games, but now having taken just two points from a possible six in their last two outings.

And for supporters it serves as another disappointing result, as voiced on Twitter, Facebook and our forums after the game.

The Fab Four’s failure to fire was lamented…

In terms of @LFC's fab four, Mane has been a bit Pete Best these last two games.

“Salah lost his mojo early, Coutinho and Mane looked like they left theirs in the changing room before kick off.”

– Jase on the forums.

While Klopp’s rotation came in for criticism…

Evidence tonight that Sunday, more than anything else, was a momentum killer. We were flying going into that game. Win that we go into tonight bouncing. Managers got its massively wrong with those two team selections. Let’s hope he learns from it.

Glad we rested players for the Derby. Really paid off there. #LFC

“All momentum was lost vs Everton. You play your best team every game if available. Today was awful. Worse than Everton. Goal rightly disallowed. I’m worried.”

Rubbish. We should have been fresh with the changes, didn’t perform like it.

2 points against the likes of Pardew & Fat Sam. Not good enough.

That rotation worked out well, 2 points from 6 against shite, sports science hey ? stick to playing your best 11 when you have momentum, then learn how to use your subs to affect or control a game ?

Four points dropped by Liverpool in 4 days due to poor refereeing decisions. I imagine Klopp will be fuming.

We literally have no luck in the world. Penalty given against us vs Everton that should never have stood and now Solanke’s goal wrongly ruled out.

And few found optimism in another two points dropped…

It's these games season upon season #LFC have struggled with. Can have all the firepower in the world but if you don't know how to win in different ways, it's useless. Feels like a loss.

Absolutely fuming here. Feels like we're in another rut now just a week after it looked like we were flying.

A bad, bad performance, simple as that.

Knew it would finish 0-0 from approximately 15 minutes onwards, which can't be good.

Thought the Anfield crowd were shocking too.

“2 goals in 2 games to 1 goal in 2 games. This team is boom or bust. So difficult to be a fan of Liverpool. One week you look like world beaters, the next like a mid table team. Tough.”

Clubs aren’t going to come to Anfield and open the door. Games take patience, but the attitude has to be spot on and at times I think this team expects the opposition to simply roll over.

“We can’t just attack attack attack. The players must learn to play controlled and defensive football or else we won’t win the PL any time soon.”

– Elessar on the forums.

Even when will were the best team in the world we had games like that. It's how you respond to them in the next game that counts.

*whispers* 11 games without defeat now and still only four points off third.