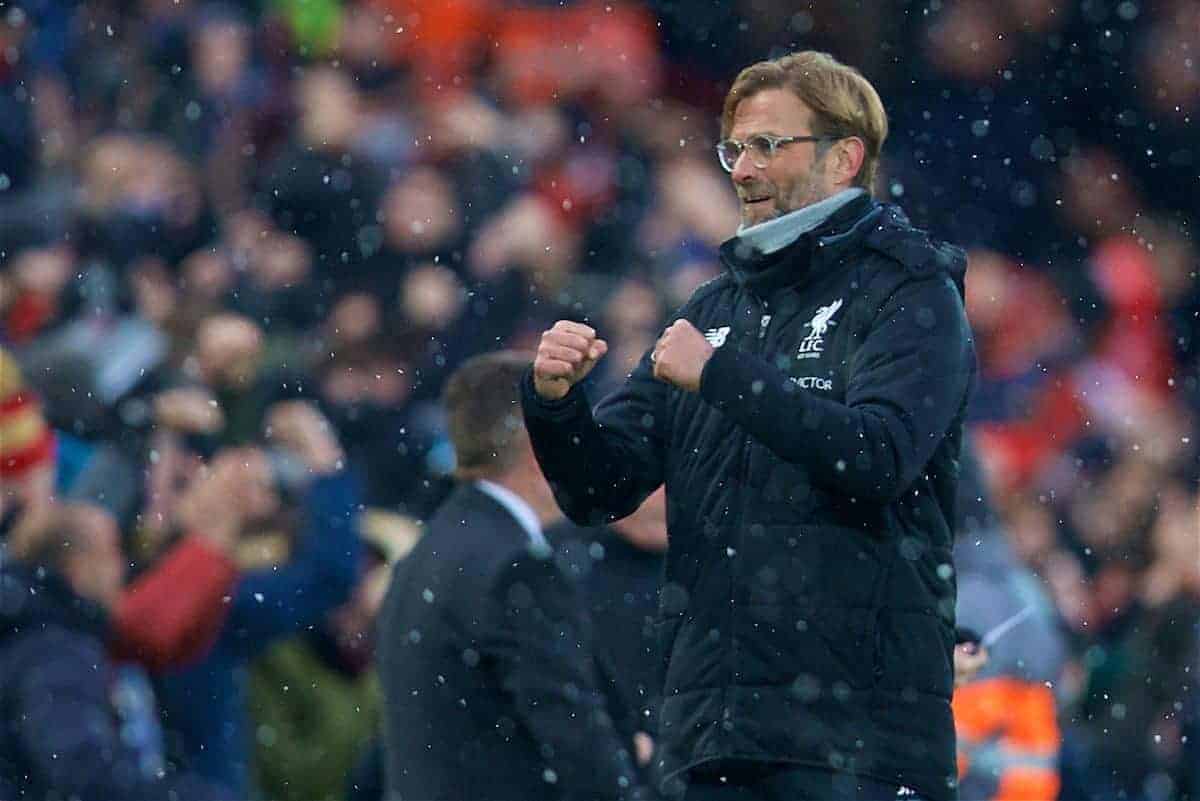 Liverpool are still smarting from Sunday’s Merseyside derby draw, and Jurgen Klopp‘s side will be desperate for three points at home to West Brom.

Just when you think everything is going swimmingly, Liverpool somehow go and drop points against a cynical, defensive-minded Everton.

Quite how Sam Allardyce’s team took a 1-1 draw from Anfield remains a mystery, but it is a result that cannot afford to derail the Reds’ momentum.

The games keep coming thick and fast, with a beleaguered West Brom side making the trip to Anfield for a midweek Premier League clash.

The Baggies are without a win in 15 games, going all the way back to August, and Alan Pardew is still taking time to settle having replaced Tony Pulis as manager.

All on eyes will be on Klopp on Wednesday, having cut an angry figure after the weekend’s match.

The manager has taken plenty of flak for his selection in the derby, and there are sure to be more changes made on Wednesday, as the manager retains a freshness within his squad.

If the Reds can see off West Brom, and do the same to Bournemouth at Dean Court on Sunday, the Everton game will all be forgotten about.

A potentially freezing cold Anfield awaits its latest hosting duties—hopefully a huge response is on show by those brilliant but infuriating Reds. Klopp has confirmed that Adam Lallana is training normally with the rest of the squad, but he won’t make his second appearance of 2017/18 on Wednesday.

Alberto Moreno and Joel Matip are definitely out, with the length of the former’s absence from the team still unknown.

There are “one or two” injury doubts following the derby according to Klopp, so second-guessing his starting lineup is a tough task.

Andrew Robertson has a good chance of starting at left-back again, while Trent Alexander-Arnold coming in for Joe Gomez makes sense.

Both Emre Can and Gini Wijnaldum will hope to feature in midfield, and Philippe Coutinho and Roberto Firmino are expected to start, having been left out against Everton.

Sadio Mane has been a little off-colour of late, and a rest could do him good, while 19-goal man of the moment Mohamed Salah may begin proceedings on the bench too.

West Brom injuries are without Craig Dawson, James Morrison and Nacer Chadli, but Pardew has an otherwise fit squad to choose from.

Last 5 at Home to West Brom West Brom have won just one of the last 10 meetings with Liverpool—a 2-0 victory at Anfield in February 2013.

Steven Gerrard missed a penalty that night, with Gareth McAuley and Romelu Lukaku scoring for the visitors.

Three of the last five matches have been drawn. Speaking at Melwood on Tuesday, Klopp assessed the task at hand for Pardew, acknowledging the difficulty of working with another manager’s squad:

“They did the squad in the summer, for a specific type of football, so it’s still long balls, still set-pieces, very physical, that’s how it is,” he told reporters.

“You can only judge after much more time than Alan had so far.

“They need points, they’re not in comfortable situation. It’s not a worrying situation, [but] they started really well then obviously the situation changed.

“We know what we can expect but [it is a] home game for us, that’s all I have to say about that.”

The match is not live on UK television, so make sure you follow our matchday live blog instead, with minute-by-minute updates throughout the evening.

Henry Jackson is there to talk you through the action from 7.15pm (GMT), with kickoff at 8pm.