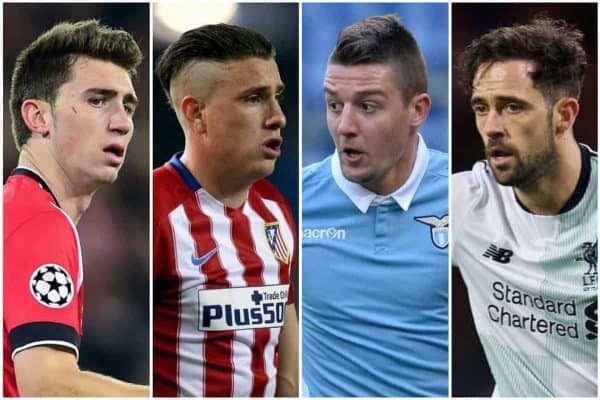 We round up the latest Liverpool transfer news and rumours, as Jurgen Klopp eyes further reinforcements following the signing of Virgil van Dijk.

Van Dijk will become the club’s record signing when he makes the £75 million move from Southampton on January 1, in a landmark deal for the Reds.

The centre-back arrives as one of Klopp’s key players, earmarked as a much-needed leader at the back.

But with the winter window yet to open, the German is being touted with an interest in a variety of other names, while others could leave Anfield next month.

Here’s the latest from the rumour mill, with Klopp setting his sights around Europe.

6 Other Targets Mooted For Busy Reds

The Reds’ pursuit of Van Dijk was ambitious, and finalising a world-record switch underlines the club’s intention to break back into Europe’s elite.

But according to Goal’s Melissa Reddy, the business is unlikely to stop there, with six other big-name talents linked with a move to Merseyside.

Elsewhere, Lazio midfielder Sergij Milinkovic-Savic is another name reportedly of Klopp’s radar, though the Serbian is valued at £92 million.

Perhaps most interestingly, beyond Akanji, Reddy suggests Liverpool are interest in another pair of centre-backs in Athletic Bilbao’s Aymeric Laporte and Atletico Madrid’s Jose Gimenez.

Could Klopp be seeking a new long-term partner for Van Dijk?

Breaking the bank to sign Van Dijk was a bold move from Liverpool, and they reportedly moved swiftly in order to pip Man City to a deal.

But after the Dutchman became the Reds’ new No. 4 and underlined his intention to “try and help this great club achieve something special in the years to come,” Pep Guardiola has weighed in.

Speaking after City’s 1-0 win away to Newcastle United on Wednesday night, the Spaniard claimed he was never interested in Van Dijk.

It seems rather convenient that this would be the case, and with Vincent Kompany limping off with injury once again at St. James’ Park, it may be that Guardiola is left ruing this ‘decision’…

With Daniel Sturridge injured, Danny Ings has been handed a Liverpool lifeline in recent weeks in the form of three appearances in Klopp’s matchday squad.

This has, so far, amounted to 11 minutes on the pitch over two substitute appearances against Everton and Bournemouth, with both Roberto Firmino and Dominic Solanke preferred up front.

It seems highly unlikely Ings will break into the first-team setup on a regular basis, particularly with Firmino in such strong form.

And according to the Independent, West Brom are among the clubs interested in signing Ings on loan next month, along with Newcastle and West Ham.

Alan Pardew is said to have “reignited his interest” in Ings from his time in charge of Crystal Palace, “setting sporting director Nicky Hammond to work on a deal for the former Burnley man that would likely begin as a loan.”

Ings is not likely to be the only player allowed to leave the club on loan in January, with Marko Grujic, Harry Wilson and Ben Woodburn among those set to depart.

It remains to be seen which other names join the peripheral quartet on temporary deals away from Anfield, though the likes of Lloyd Jones, Ovie Ejaria and Cameron Brannagan could be considered.

Discussing the possibility of some of his fringe figures moving on, Klopp suggested this would the case, though “most of them” would stay.

“We have to decide at one point if it makes sense that they stay,” he told LiverpoolFC.com.

“For a lot of them, it makes sense that they stay here because we need them. For a few, maybe it makes a little bit less sense.

“We will see—nothing is decided so far. We will see which clubs are asking and then we have to make a decision whether it is good for the boy or not and all these things.”

One player who won’t be moving on next month, regardless of Van Dijk’s arrival, is third-choice centre-back Ragnar Klavan.

Klavan has enjoyed a regular run of games alongside Dejan Lovren of late due to injury to Joel Matip, and has produced an impressive string of performances.

While Van Dijk’s move to Anfield will likely impact on Klavan’s chances of a regular role, Klopp has revealed he has turned down overtures from German clubs as he is relying on the 32-year-old.

“In this world, especially in England, with big signings and stuff like this, then you see how much we paid for Raggy!” he said.

“And how many German clubs have asked me already, ‘Do you think about him [being available for transfer]?’, which we don’t, of course.

“He is a perfect role model for pretty much all signings. He loves being here.”

Finally, with Reddy suggesting “there is also a decision to be made in the goalkeeping department,” the Reds have been linked with a replacement for Simon Mignolet.

Don’t get your hopes up, however, as claims of an imminent move for Paris Saint-Germain’s backup goalkeeper Kevin Trapp originate from Italian outlet Calcio Mercato.

Trapp has dropped down the pecking order at the Parc des Princes, with young French stopper Alphonse Areola preferred, and Klopp will be aware of the talents of his compatriot.

But given the flimsy source, it remains highly unlikely Mignolet will be usurped next month.