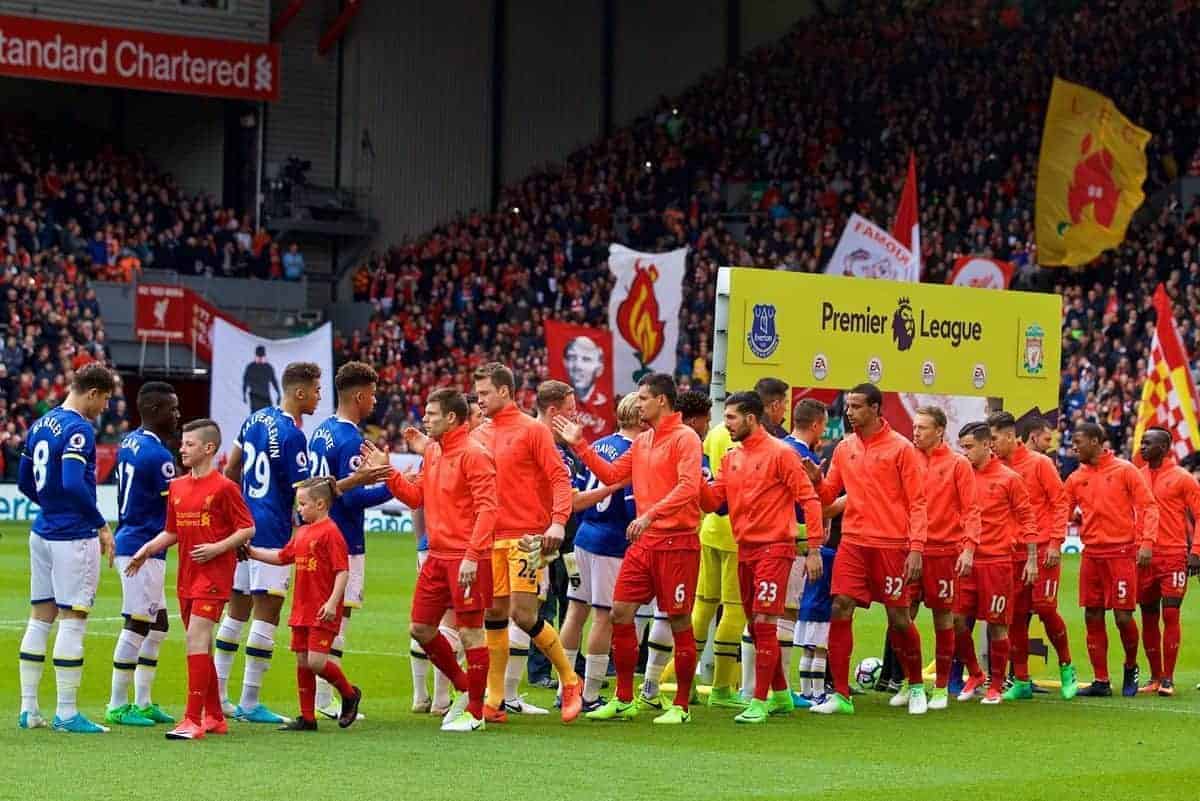 Liverpool host Everton in the 229th Merseyside derby on Sunday afternoon at Anfield, with the Reds in the middle of a superb run of form.

Jurgen Klopp‘s side are absolutely flying at the moment, with back-to-back 5-1 and 7-0 wins over Brighton and Spartak Moscow proof of that.

This is the Liverpool that we saw destroy teams in early parts of last season, with their attacking football too much for opponents to handle. They have scored three or more goals in eight of their last nine matches.

In Philippe Coutinho, Mohamed Salah, Sadio Mane and Roberto Firmino, the Reds possess a wonderfully balanced attacking unit, and all four are in sublime form at the minute.

Everton make the famously short trip to Anfield at a pretty terrible time for them, and on paper it is a derby that should be as one-sided as any in recent memory.

Liverpool’s local rivals may well be a different animal under Sam Allardyce, however, and they have actually won on three of their last five Premier League outings.

We know how the game will pan out tactically before it even kicks off—it will be a case of the Reds trying to break down their well-drilled and inferior opponents—but the hosts have to play well to win.

Everton have not won at Anfield since 1999, and while records are always there to be broken, only a top-drawer performance and plenty of luck will achieve that feat on Sunday.

We have witnessed some joyous home thrashings of Everton in the last five years, including two 4-0 wins and a comprehensive 3-1 victory, and more of the same is quite possible this weekend.

The most important thing is not taking Everton for granted, despite their surprise struggles this season. Alberto Moreno left the pitch in tears against Spartak, and he will miss a chunk of action with an ankle injury.

Joel Matip and Nathaniel Clyne are also unavailable, though Adam Lallana could make his return after joining training on Friday.

Not spotted at Melwood, however, was Coutinho, and it remains to be seen whether the Brazilian is injured or was merely rested a further day.

Simon Mignolet will return in place of Loris Karius, while Klopp will have to decide between Andrew Robertson and James Milner at left-back, with the latter registering three assists there after coming on for Moreno on Wednesday.

The manager has confirmed that Jordan Henderson will return to the side, having been left on the substitutes’ bench in midweek, meaning Emre Can or Gini Wijnaldum may make way.

Liverpool’s in-form attacking trio of Salah, Mane and Firmino could all start again, but Klopp may feel the need to give one of them a rest.

If that is the case, Alex Oxlade-Chamberlain, Daniel Sturridge and Dominic Solanke will all be desperate to prove their worth in such a high-profile game, if given the chance.

Last 5 at Home to Everton

Everton have not won a derby in their last 14 attempts, with their last victory against Liverpool coming at Goodison Park in November 2010.

That 2-0 win came during the infamous Anfield reign of Roy Hodgson, though, so does it even count?

“We have to start with the first whistle, do the right things in the right moments, I’ve spoken with the boys about that,” he said.

“It’s not allowed to play like we did in the last 20 minutes against Moscow, it would be silly.

“We have to work hard in the best way, be patient like we were patient against Brighton in the first 25 minutes. There’s no easy way through, that’s for sure.”

The match is part of a Sky Sports’ Super Sunday that also includes Man United vs. Man City later in the afternoon.

Our matchday live blog will be up and running from 1.30pm, with Ben Twelves in the chair this week.