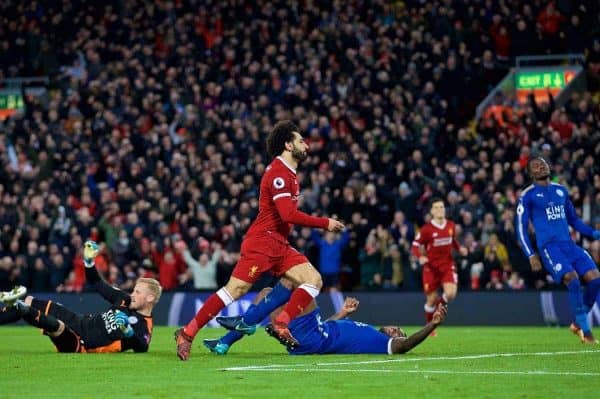 Mohamed Salah proved match-winner once again as Liverpool came back from a goal behind to round off 2017 with a 2-1 win over Leicester City.

The Reds took to Anfield for their final game of the year looking to make it 15 unbeaten as they clashed with a Leicester side slowly improving under Claude Puel.

With new signing Virgil van Dijk watching on from the stands following his £75 million move from Southampton, Liverpool had the impetus to impress.

Jurgen Klopp made five changes to the side that thrashed Swansea City 5-0 on Boxing Day, with Sadio Mane among those returning to the starting lineup.

The Senegalese joined his fellow ‘Fab Four’ brethren, as Klopp fielded a strong attacking side which ultimately proved decisive. With Van Dijk unable to take to the field until New Year’s Day, the need for such a substantial outlay was hammered home after just two minutes when Jamie Vardy tapped in.

Joel Matip‘s sloppy pass out from the back sold Emre Can short, with Vicente Iborra eluding the German to feed Riyad Mahrez in the box for a simple slide pass across to the rampaging Vardy.

This put considerable pressure on Liverpool to break down a Leicester side primed for a counter-attacking game, and Salah had a great opportunity to restore the lead four minutes on, but sent his effort wide from eight yards out.

The Reds kept the intensity up as the visitors continued their adventurous approach, and Mane had the ball in the back of the net from Andrew Robertson‘s teasing cross only to be ruled out.

Robertson was at the heart of a penalty call on the half-hour mark as Daniel Amartey put a hand on his shoulder on a mazy run to the byline, but referee Neil Swarbrick rightly waved away appeals.

Philippe Coutinho drew an impressive block from Amartey after a one-two with Roberto Firmino, as the Foxes’ resolute defence held on for half-time. Clearly lifted by Klopp’s half-time team talk, the Reds kept up the momentum after the break, and this time reaped the rewards on 52 minutes.

With Firmino gliding into the centre and feeding the ball into Can’s feet, the German played it towards Mane, whose smart backheel drifted into the path of Salah to fire home and make it 1-1.

The combination play continued as the Foxes began to lose their cool, and Mane had Kasper Schmeichel beaten after a clipped pass from Coutinho, but the No. 19 was ruled offside.

As the clock turned into the final 20 minutes, Klopp opted to replace Mane with Alex Oxlade-Chamberlain, with the in-form midfielder tasked with changing the game.

It was his fellow summer signing, Salah, who put Liverpool ahead, though, spinning away from the tragic Harry Maguire to fire his 23rd goal of the campaign.

Liverpool retreated into a deeper formation after going ahead, with Klopp sending on Ragnar Klavan late on, as they held on for another three points.