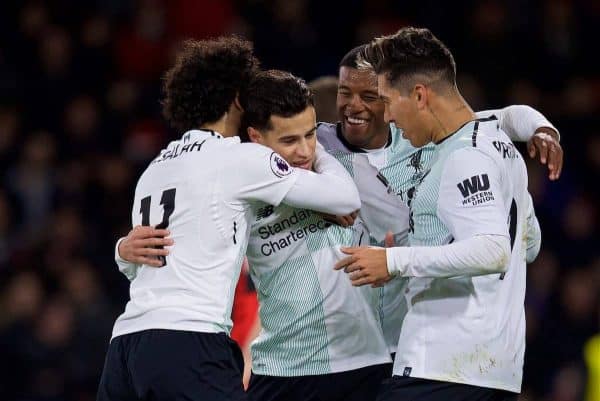 With half of the Premier League season complete, we have taken a look at which Liverpool players have shone brightest this season.

The Reds drew 3-3 at Arsenal on Friday night, with a 2-0 lead quickly turning into a 3-2 deficit, only for Roberto Firmino to save the day.

It means 19 league games have now been played, as we reach the halfway point in what we hope is still a memorable campaign at Anfield.

(Players to have featured for less than 180 minutes not included.)

This has been a below-par season for Jordan Henderson, who has really struggled to find his rhythm following a long-term injury absence.

His passing has been off the boil, he hasn’t held his position in defensive midfield and his leadership qualities have been lacking.

Henderson is nowhere near as bad as some claim, especially when he is fully fit, but things must go up a gear in the second half of the season.

The outfield equivalent of Mignolet.

Credit where it’s due, Dejan Lovren has done pretty well since an atrocious display at Spurs that saw him hooked before half-time, but he is still an accident waiting to happen.

The 28-year-old’s air-kick against Sevilla was another poor moment, and if he remains in this Liverpool team, their back line will not improve.

Not good enough, simple as that.

Simon Mignolet isn’t a bad goalkeeper, but he is still making the same mistakes that hampered Liverpool when he first arrived four years ago.

There have been some good saves, most notably from Glenn Murray at Brighton, but his howler at Arsenal and equally poor showing at Tottenham prove he must go next summer.

After a starring role for England’s U19s in the summer, we expected big things from Dominic Solanke, but he is still someone adjusting to his new club.

He has looked the part every time he has been involved, but no Premier League goals yet is proof that he is not yet a dependable figure at the top level.

Daniel Sturridge‘s Liverpool career looks to be petering out, and this season has shown that his best days are very much behind him.

He has enduring quality that can be a threat from the substitutes’ bench, but how many games has he really influenced the game?

Has done nothing wrong, barring a couple of big misses in Moscow, but hasn’t had enough positive moments either.

Having been shifted away from the left-back role he seemed to despise last season, James Milner has done adequately when needed in midfield.

You know what you’re going to get from the veteran—experience, industry and intelligence.

After a strong first season at Liverpool, Gini Wijnaldum has been a little disappointing, particularly away from home.

His ability to be invisible in certain games is a cause for concern, and he needs to start adding more influence in the final third.

That being said, he is a very intelligent player who seems to thrive most in big home matches.

In fairness to Ragnar Klavan, he is more competent than many give him credit for, and his recent form has been good.

The 32-year-old is still not the answer, however, and he was appalling in the 5-0 defeat at Man City back in September.

A squad player at the very best.

Joel Matip is Liverpool’s best centre-back, but it is still hard to consider him good enough to take this team to the next level.

His elegance on the ball and towering presence work in his favour, but he has switched off in a number of matches, and doesn’t possess leadership qualities.

His injury problems are also an issue.

Loris Karius has improved after a highly unconvincing first year on Merseyside, but he still doesn’t look like a top-class goalkeeper.

A soft goal conceded against Spartak Moscow proved costly, and he nearly had three clearances charged down at home to Arsenal, but he has generally been reliable, when tested.

Emre Can‘s future at Anfield is very much up in the air, and his form has been solid, if unspectacular.

When everything clicks, the German has been superb, running the show in midfield and chipping in with four goals, but he has also failed to hit those heights a number of times.

A recklessness can hamper him, with very little subtlety to his game, but he is a player the Reds do not want to lose ahead of next season.

By Sadio Mane‘s high standards, this hasn’t been a very good season, but he has still done fairly well.

The Senegalese was on fire in the early stages of the campaign, but his red card against Man City, subsequent suspension and hamstring injury have curtailed his progress.

He has been very frustrating recently, but will come good again. Still arguably Liverpool’s best player on top form.

Alberto Moreno‘s form saw Andrew Robertson struggle to get game time, but he was still Man of the Match on his debut against Crystal Palace in August.

The Scot is a slick full-back who uses the ball well and defends intelligently—he looks a good addition, even though he will never be a world-beater.

Joe Gomez has been first-choice right-back ahead of Trent Alexander-Arnold, but the teenager has also done well when given the chance.

There is still a rawness to his game that will see errors occur from time to time, but he is a footballer of unbelievable potential.

The free-kick in Hoffenheim was one of the most memorable moments of the season to date.

After a tough start to life at Liverpool, Alex Oxlade-Chamberlain has improved drastically, and looks an exciting signing from Arsenal.

His form over the last month or so has been particularly impressive, and he looks happy playing in the central midfield role he has always craved.

He isn’t perfect, by any means, but he has done well.

Moreno deserves huge praise for turning his Reds career around, and up until injury, he had arguably been his side’s most consistent performer.

The stupid mistakes have become less frequent, his quality in the final third has improved and he has cut a more focussed figure.

Not many would have tipped Gomez to feature so prominently this season, but he has excelled at right-back in the absence of Nathaniel Clyne.

Still only 20, there has been so much maturity on show from the Englishman, as well as pace, power and ever-improving end product.

His future lies at centre-back, but he has more than impressed on the right, despite lapses against West Ham and Arsenal.

Liverpool’s most important player? Quite possibly.

Roberto Firmino is finally starting to earn more widespread praise, and his ability leading the line has been a joy to watch many times this season.

His touch, awareness and all-round intelligence are on a par with any player in the country—he is also adding more goals, having found the net 14 times in 2017/18.

Philippe Coutinho could easily have downed tools after his move to Barcelona failed to materialise, but he has been excellent.

Eleven goals is a very impressive return, and there have been some exceptional individual performances, most notably at Brighton earlier this month.

Enjoy every minute of him while he is still here.

Far and away Liverpool’s Player of the Year so far, Mohamed Salah has been an unbelievable signing.

The 25-year-old has scored 21 goals by Christmas, despite often occupying a wide role, and his speed and movement have made him arguably the league’s best player on current form.

One of the Reds’ most exciting purchases for many, many years.