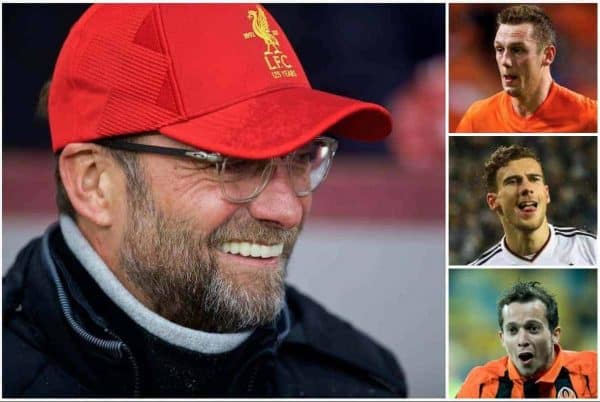 Liverpool are already set to add Naby Keita to their squad on July 1, but Jurgen Klopp could also set his sights on a host of potential free transfers.

The Reds struck a deal with RB Leipzig last summer, with Keita spending a final campaign in Germany before making the £55 million move to Merseyside.

It is a deal that shows impressive forward-planning from Klopp’s side, as Keita is poised to develop into one of Europe’s top midfield talents, and another season in Leipzig would aid this.

While the January transfer window has already seen Liverpool sign Virgil van Dijk in a club-record deal, the new year has also brought the possibility of further additions lined up for July.

Liverpool can now begin negotiations with players outside of England with six months left on their contracts, with a view to a free transfer when their terms expire.

Here are five players Liverpool could look to sign on a pre-contract deal this January.

De Vrij has been widely touted as a target for the Reds as uncertainty reigns over his future with Lazio, where he is currently team-mates with Lucas Leiva.

The Dutchman was previously expected to renew terms with the Rome outfit, including a release clause of around £22 million, but this has not materialised and interest continues to mount.

Along with Liverpool, the likes of Inter Milan, Man City, Atletico Madrid and Barcelona have also been suggested as possible suitors, and it easy to see why.

Less physical, more intelligent, De Vrij is adept at operating in a front-footed defensive system, using his strong reading of the game to intercept dangerous attacks and composure to prompt the transition.

Though he has been deployed on the left-hand side of a centre-back pairing in the past, De Vrij is naturally right-footed, and could provide Van Dijk with a ready-made partner at the back.

Liverpool will take on Reyes’ Porto in the Champions League last 16 this year, with their first meeting on Valentine’s Day providing Klopp with a glimpse of another potential centre-back target.

While De Vrij would step in and take up a long-term role as first choice alongside Van Dijk, Reyes could arrive as more of a squad option, but he is certainly far from a poor choice.

Reyes is a ferocious, battle-hardened defender who thrives under siege at the back, but he is also comfortable in possession and, owing to his experience as a defensive midfielder, is able to step out of defence.

Still only 25, the 6’2″ centre-back has the potential to slot into Klopp’s ranks and hone his game as a solid Premier League defender.

Liverpool could face work-permit issues if they were to make a move, but given his status as a 53-cap international with Mexico, this should not prove to be a problem.

Young German prospect Meyer has been regularly linked with Liverpool since Klopp took charge in 2015, with the midfielder describing the Reds’ manager as a “great coach” last year.

That came with Meyer admitting it was “50-50” whether he would renew terms with Schalke, in a season that saw them struggle for form and ultimately finish 10th in the Bundesliga.

Both he and his club have experienced an upturn in fortunes under Domenico Tedesco, however, with Meyer thriving in a new deep-lying role in midfield.

Here, he has been able to utilise his impressive off-ball work and dictate with the game playing out ahead of him, shifting from a more progressive, attacking role.

That Meyer is able to operate in a variety of positions, including on either flank, would be a great benefit to Klopp’s system, and if he can still be lured away from Gelsenkirchen it would certainly be worth it.

The holy grail of free transfers in 2018, Goretzka is unsurprisingly attracting interest from some of Europe’s biggest sides, including Bayern Munich, Juventus, Barcelona and Man United.

Liverpool have long been believed to be in pursuit of the Germany international, whose blend of physicality, mobility and attacking instincts make him an ideal fit for the Premier League.

Given the freedom to probe by Meyer’s strong work at the base of Schalke’s midfield, Goretzka is a powerful, ghosting presence in the final third.

This season, he has scored seven goals in 15 games for club and country, while his all-round game as an forward-thinking creative midfielder has improved significantly.

Goretzka’s compatriot, Emre Can, is set to leave Liverpool this summer in a similar deal, and if Klopp is able to convince him to turn down some of the continent’s heavyweights he would arguably be an upgrade.

The landscape of the Brazilian national team has changed dramatically since their 7-1 loss to Germany in the World Cup semi-finals in 2014, with both Philippe Coutinho and Roberto Firmino taking advantage.

One player who became a victim of that miserable defeat was Shakhtar winger Bernard, who replaced the injured Neymar in Belo Horizonte and hasn’t played for his country since.

That isn’t to say he has faded into obscurity, however, and surveying the soon-to-be free agent market, he is one of the most attractive options.

Bernard is a lightning-fast, skilful left winger at his best running at opponents, possessing a quick turn of pace and the ability to pivot swiftly to avoid challenges.

He scored a sensational goal in what is currently Man City‘s only loss of the season so far, the 2-1 defeat at Shakhtar in December, and also showcased his defensive ability that night despite his small stature.

This season, Bernard has scored nine goals and laid on three assists in 24 games in all competitions, and after reviving his fortunes in the Ukraine he could be worth the gamble.