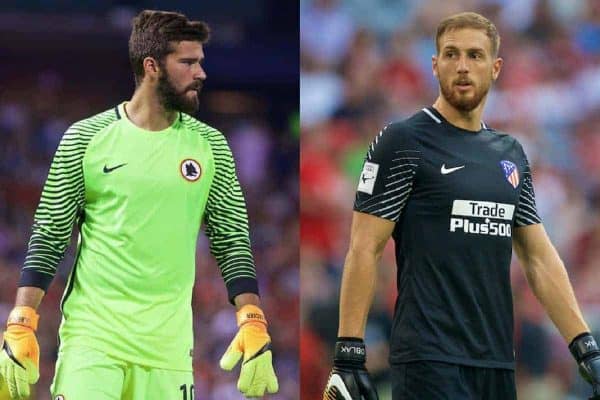 Liverpool are interested in both Roma’s Alisson and Atletico Madrid’s Jan Oblak as they prepare to sign a new goalkeeper in the summer window.

The Reds are in the throes of an upheaval between the sticks, with Loris Karius taking over from Simon Mignolet as Jurgen Klopp‘s new first choice.

Karius has started in both of the last two games, with Klopp confirming after Sunday’s 4-3 win at home to Man City that his young compatriot is now No. 1.

This has led to Mignolet considering his options, with the 29-year-old explaining that “this situation can not last too long” as he eyes a place in Belgium’s World Cup squad.

Given the instability of the January market it had been unlikely Liverpool would make a move for a new goalkeeper this month, despite links with both Alisson and Jack Butland.

But according to the Times‘ Paul Joyce, Klopp has set his sights on signing another stopper ahead of 2018/19.

Alisson is one of the targets named, but “negotiations on a fee could prove difficult” after Liverpool secured a bargain with the £36.9 million signing of Mohamed Salah from Roma in June.

The Brazilian is valued at £44 million which, given the landscape of the current market, could still be a worthwhile outlay.

Meanwhile Oblak, who has established himself as one of Europe’s leading goalkeepers during his three-and-a-half seasons with Atleti, is “another potential candidate” with an £89 million release clause.

Despite reservations over Roma’s demands, Alisson is the more realistic target for Liverpool at this stage, though Oblak is the most interesting.

Having joined from Benfica in 2014, the Slovenian has risen to prominence in La Liga, and in the past two seasons has won Marca‘s Zamora Trophy for the lowest goals-to-games ratio.

In his second year in Madrid he conceded just 18 goals in the entirety of the domestic campaign, equalling Deportivo de La Coruna goalkeeper Francisco Liano’s record from 1993/94.

And so far this season he has kept 12 clean sheets in just 19 league games, conceding eight goals in 1,710 minutes of football, or one every 213.8 minutes.

Oblak is an elite-level goalkeeper who only just turned 25, with considerable scope to develop further if he made the move to the Premier League.

Activating his release clause would require breaking Liverpool’s transfer record once again, but it would arguably be a wise move to shore up Klopp’s back line for the rest of his tenure.