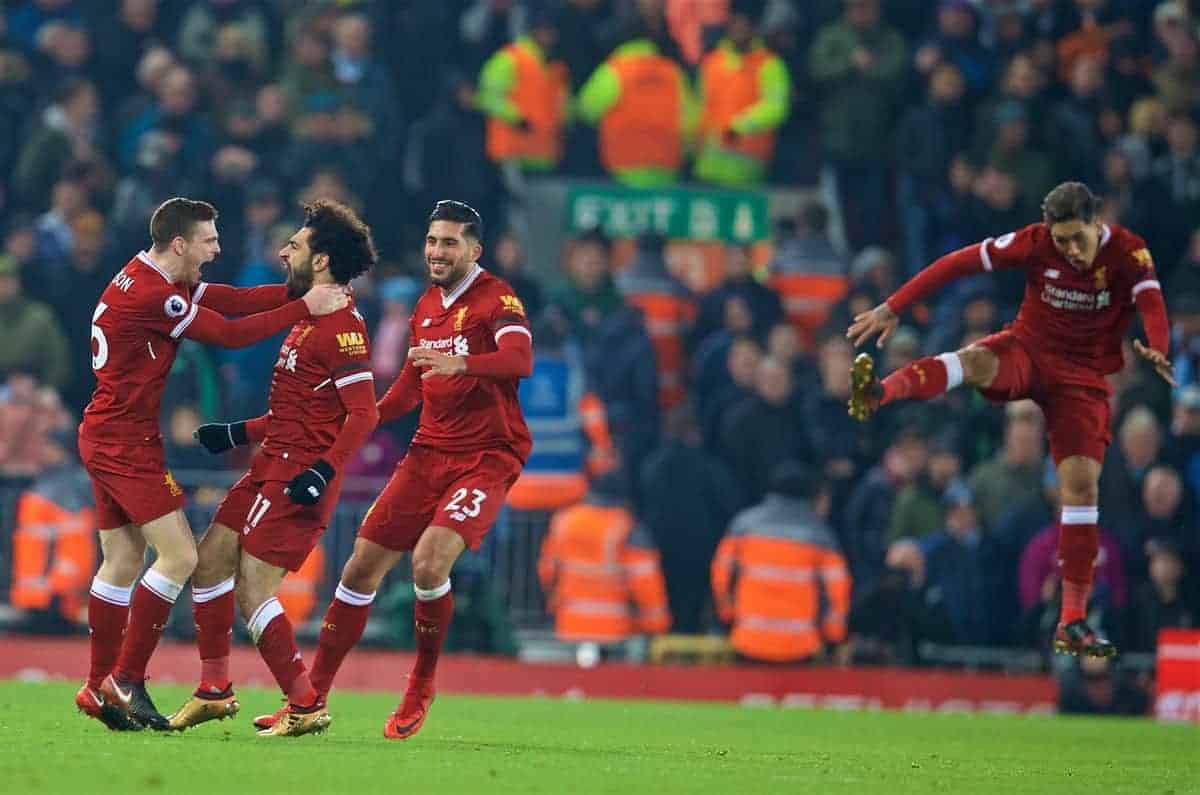 Liverpool beat Man City 4-3 in a truly astonishing Premier League clash on Sunday, and Reds supporters were left overjoyed by the result.

Who else can barely breathe?

Liverpool ended City’s unbeaten league run this season, with Jurgen Klopp‘s side producing arguably their best ever performance under the German.

Alex Oxlade-Chamberlain fired the hosts in front, only for Leroy Sane to equalise just before half-time, with Loris Karius not covering himself in glory.

Roberto Firmino, Sadio Mane and Mohamed Salah all scored in a stunning second-half burst, but late goals from Bernardo Silva and Ilkay Gundogan made for an unbearable nervy finish.

It was an afternoon full of outstanding individual performances, and fans picked out their best players after the final whistle…

Robertson impresses more and more, didn't expect this level of quality from him!

Lallana on for Salah, who had a quiet game by his standards but scored one of the goals of season.

No Liverpool player's been bad, obviously, but Robertson, Wijnaldum and especially Oxlade-Chamberlain have all been outstanding.

Give MOTM to Andy Roberton for smashing Sterling all over the shop.

“Ox is MotM for me. He played a brilliant game. Andy Robertson is a close second – he was outstanding.”

Difficult to pick a Man of the Match but Roberto Firmino was immense. Give him that lifetime contract. ?

Bobby Firmino is the greatest Brazilian we've ever had.

I know we were raving about Moreno before his injury, but Robertson is wonderful.

There isn’t anyone in world football like Bobby Firmino. Uniquely exceptional

Love Robertson's attitude and determination – on top of his abilities. Bargain of the summer.

Can, Robertson, Wijnaldum, Firmino and Chamberlain all outstanding. Salah and Mané have both played better, but both still scored.

Coutinho’s name was on some peoples lips, with the departed Brazilian not missed…

They are some team them. Great win against a great team.

“It’s looking very very good. Must admit I dreaded today but the way we played was a massive statement having just lost Coutinho.”

And all this happened without Coutinho

No Coutinho, No VVD, Lovren as captain. Still won. pic.twitter.com/aij9ubna2p

And Liverpool’s display was lauded by the masses, as well as the match in general…

And some people don’t love football….

Just lost one of our best players. New record signing missing through injury. First team to beat City in the league all season and up to 3rd in the table. That'll do.

We are a serious football team.

Great 2 c a team like Liverpool, infused by the positivity of a leader like Klopp, not shrinking in front of City but having courage to play

Liverpool Football Club: Been fucking with my emotions for 29 years but my God, do I love ‘em. pic.twitter.com/2tKu0Hk7Th

What a game, by far the best game of the season. Two fantastic teams going at it and throwing blows for 90 minutes. Phenomenal!

Every single one of those Liverpool players was unbelievable today – an amazing win.

Credit to City, who will be more than worthy champions.

4 goals to give us 3 really big points! Dramatic win for #lfc @LFC pic.twitter.com/EFEp7zp4Zy

There was a freedom about Liverpool 4 Man City 3, but also ball-hounding and tenacity: a great balance. Best of all, the talent expressed itself.

After the massive dark cloud of Coutinho exit loomed over everything, that was the perfect way to follow up the Everton win. Anfield confidence levels now sky high. Conversely made it better for VVD not to feature – the team humiliated at the Etihad got their revenge. #LFC

Don't care about the late goals. That was a herculean performance from #LFC. Absolutely incredible physical effort and a vintage display of gegenpressing.