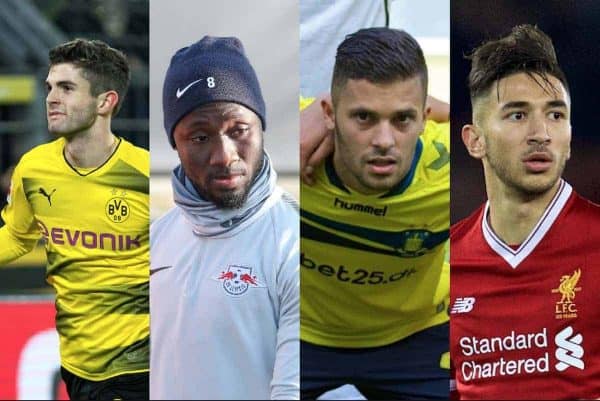 We round up the latest transfer news and rumours to affect Liverpool on Thursday, as the Reds prepare for Sunday’s visit of Man City.

Jurgen Klopp‘s players have enjoyed a welcome break without a game, with eight days between the 2-1 FA Cup win over Everton and this weekend’s eagerly-anticipated Premier League clash with City.

It is sure to be a must-watch affair, with both teams expected to approach the game in a positive manner, and the visitors looking to remain undefeated in the league this season.

Away from the pitch, the usual transfer stories are doing the rounds, with some interesting reports emerging in the last 24 hours.

Naby Keita to arrive this month?

Supporters are still smarting from the departure of Philippe Coutinho to Barcelona, but some more positive news emerged on Thursday.

According to many reliable individuals, including the Liverpool Echo‘s James Pearce, Liverpool are set to open talks with RB Leipzig, with regards to Naby Keita joining Liverpool in January.

The 22-year-old was pictured sitting out a training session for the Bundesliga club on Thursday, further suggesting he is pushing for a premature transfer.

Pearce states that, “Jurgen Klopp believes securing the services of Keita during the January window would be the perfect fillip for his squad following the £142million sale of Philippe Coutinho to Barcelona.”

This is absolutely spot on, and if a deal could get done, albeit with the Reds having to pay more in the process, it would fill a Coutinho-shaped hole.

All of sudden, Liverpool would have both Virgil van Dijk and Keita in their ranks – they would arguably be stronger than when Coutinho was still at the club.

Leipzig have not changed their stance yet, however, and they released a statement on the matter:

“Nothing has changed and our position hasn’t changed from before regarding this transfer.”

From one household name to someone not many would claim to be experts on.

The story claims that the 24-year-old, who has won 21 caps for Denmark since making his debut in 2015, will make the switch to Anfield in the summer.

Somewhat strangely, Alberto Moreno is said to be heading towards the exit door at the end of the season, with Durmisi seen as a better option moving forward.

This news feels unlikely for various reasons, not least because of the impressive way in which Moreno has turned his Liverpool career around.

Andrew Robertson is also looking a very good signing, excelling against Everton, so the Reds look well-stocked in that area of the pitch.

If a more reputable source came along saying similar, we may believe it, but for now, take this with a pinch of salt.

Recent rumours have been spreading about Liverpool bringing in a mystery signing this month, and Christian Pulisic has been a name on many peoples lips.

The American superstar has been linked with the Reds in the past, and he fits the profile of a Jurgen Klopp player perfectly.

It appears as though Liverpool won’t have a clear run at the 19-year-old forward, however, which isn’t a huge surprise.

The Independent claim bitter rivals Man United are now in the mix to bring Pulisic to Old Trafford, and that a move there, “could well make him the USA’s first megastar in the sport.”

Pulisic’s marketability is there for all to see, and he is capable of making whoever he moves to vast sums of money, but it is his footballing ability that comes first.

It is too early to tell who are favourites to acquire his signature, but it is refreshing to see Liverpool in with a chance of bringing in one of the world’s top young players.

Imagine him, Mohamed Salah and Sadio Mane in the same attacking unit – their speed would blow teams away!

Marko Grujic‘s Liverpool career has really struggled to ignite, and his best moment came back in the summer of 2015, when he headed home brilliantly in a pre-season friendly win over Barcelona.

Injuries have curtailed his progress, as have the many stronger midfield options at Klopp’s disposal, and a loan move this month makes sense. He has started just once this season.

According to ESPN, the young Serb could join Huddersfield Town until the end of the season, linking up with Klopp’s great friend David Wagner in the process.

The report does say that “a number of clubs” are interested in the 21-year-old, though, including West Ham and Aston Villa.

It would be a wise move by Grujic if he chose Huddersfield, and it would mean Klopp could sit back safe in the knowledge that he is learning from someone he thinks highly of.

Quite whether things will ever materialise for the midfielder at Anfield remains to be seen, but he could badly do with regular first-team football between now and May.