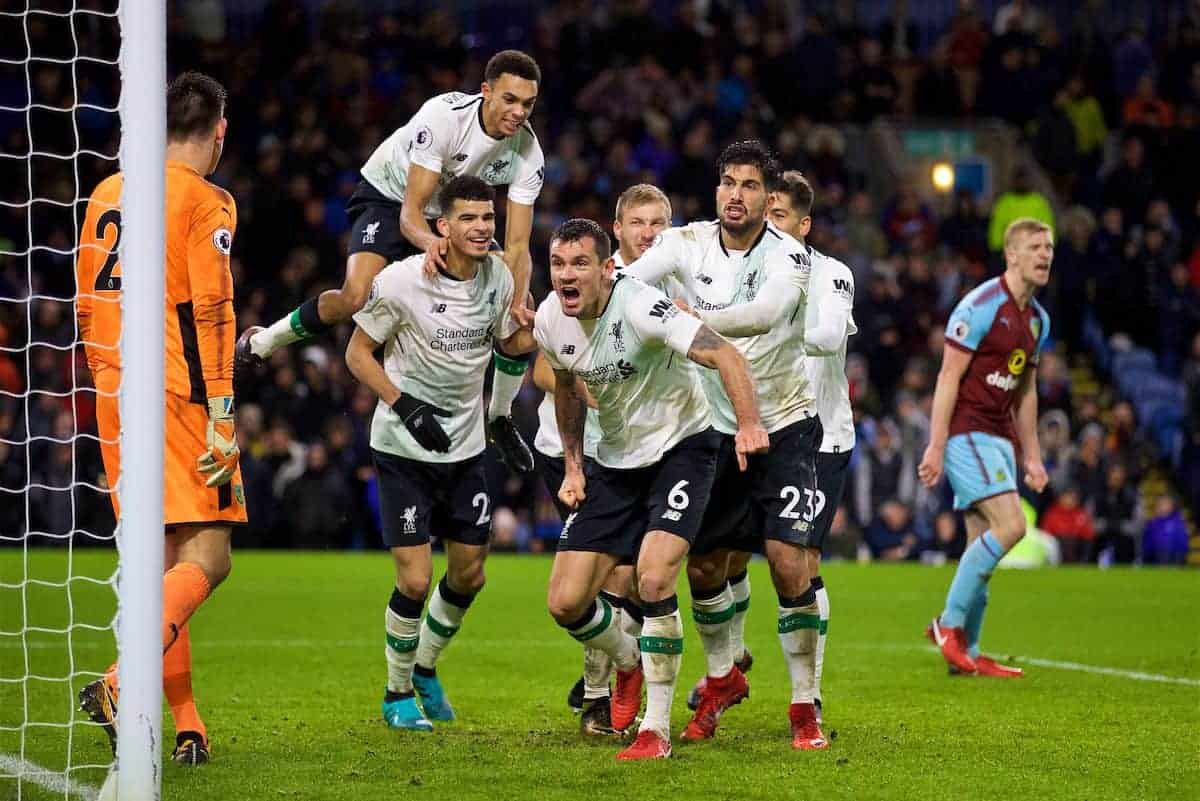 Liverpool’s centre-backs were the late, late heroes as the Reds sealed a 2-1 victory at Burnley in the Premier League on New Year’s Day.

Jurgen Klopp‘s side fought to the end and took a deserved three points thanks to an injury-time winner.

A low-key first half was scrappy and uninspiring in the rain, with both teams resorting to crosses as the best source of half-chances on goal.

Sadio Mane made the breakthrough on the hour mark with a great finish from the edge of the box and the Reds looked for much of the remainder of the game as though they’d take a big three points on the road.

Burnley had other ideas though and a late flurry of aerial balls resulted in Johann Berg Gudmundsson nodding home unmarked at the far post to equalise.

That wasn’t the end of the scoring though as Dejan Lovren and Ragnar Klavan combined in stoppage time to win the match late on.

Here are the five biggest talking points from the match.

The Fab Four became the Only One against Burnley, with Philippe Coutinho and Mohamed Salah injured and Roberto Firmino on the bench.

Mane started with Dominic Solanke and Alex Oxlade-Chamberlain in attack, with Adam Lallana supporting through the centre in what was very much a front line which had the look of a second-string to it.

While Mane and Oxlade-Chamberlain could be considered regular starters, form and rotations have ensured neither have been Klopp’s primary match-winners on a week-to-week basis.

In the first 45 minutes, the changes showed.

The Reds barely created anything of note, with a lack of tempo and movement added to by a dearth of incisive passing from deep.

Solanke worked hard to find space, Lallana got involved at every opportunity and certainly there was endeavour on the part of each, but quality in tight spaces was in short supply.

A goal would always be tough to come by in this type of match, let alone the two, three or four a full-strength side has looked capable of scoring at times.

But players given their chance simply have to step up and find a way, somehow, however necessary, to do the job asked of them.

In combining to create three or four decent openings in the second half, the new-look front line did precisely that.

It wasn’t the free-flowing, exciting and relentless attack of Liverpool at their best, but Oxlade-Chamberlain almost scored a late effort, Solanke remained busy throughout and Mane found the net.

Job done, just about, even if there wasn’t an outstanding claim made for more regular minutes on the pitch.

From Main Man to Mixed Mane Rewind a year and the idea of going into matches without Sadio Mane in the XI was enough to make Reds fans feel three points would be tough to come by.

This year, the wide forward’s form has been the complete opposite: he isn’t showing any kind of consistency, he isn’t the key attacker in the side and has even been sub at times when fit and available.

Halfway through the match at Turf Moor it had been more of the same as Mane was one of the quiet and frustrated few—but he provided the first critical moment in the second half.

His fearsome strike on the turn flew past the Burnley goalkeeper to give the Reds the lead, a tremendous goal to add to his backheeled assist last time out.

Ten minutes later though he was first man off, subbed by Klopp as he looked to introduce Firmino and manage the closing stages of the game.

It’s a tough time for Mane, no doubt, but the final-third contribution is still there from the forward and that should give optimism that, when he rediscovers his best level, he’ll be a formidable threat for defences to deal with once more.

Lallana Back in the Lineup

Fully recovered from injury and with a handful of cameo sub appearances under his belt, Lallana finally got his first start of the season at Turf Moor.

Of course, he’s in the side to offer offensive-minded threat, but the travelling Kop were singing Lallana’s name first of all on the day for a defensive contribution.

His last-man slide tackle prevented a clear run on goal for Burnley just 20 minutes in as they launched a counter-attack; it was well-timed, aggressive and utterly vital.

Going forward though, Lallana was essentially a No. 10 and it was there the Reds needed his impact to be felt.

While he worked hard, tried to find spaces and be a positive influence in possession, it was clear he was lacking rhythm after such a long time out.

Several times after the break he was bypassed or made poor judgements as when to press, when to tackle and when to run with the ball, but he played a reasonable part in the game.

Subbed off before the late drama, the game time will be vital for Lallana’s fitness as he provides Klopp with another option to change the team around in the second half of the campaign.

A Day of Big News With Centre-Backs

Early risers on January 1 would have seen confirmation that the Reds had sealed the signing of Virgil van Dijk; a club-record signing who is set to be a key component in the team for seasons to come.

Consider the gauntlet thrown down, then, current centre-backs: prove your worth to play alongside the Dutchman.

Dejan Lovren and Ragnar Klavan have both had plenty of detractors this season, at times with good reason, but they were largely decent with their defensive work at Turf Moor other than a few needless fouls in wider areas.

Late on though, it was Klavan who was beaten in the air in the lead up to Burnley‘s equaliser.

The talking points and newspaper columns would almost have written themselves had the Reds lost two points late on on the day Van Dijk signed—so it was fitting that the duo combined in more positive fashion to win the game.

The Croatian headed the ball goalward, the Estonian made sure of matters.

Even Joel Matip got to come on and play a cameo role for the final seconds, a reminder that the Reds once more have four senior centre-backs for the campaign, with Joe Gomez now strictly a both-sides full-back option for 2017/18.

There’s no question Van Dijk will be in the team sooner rather than later.

But the fight to partner him will be intense and interesting, and it was heartening to see two competitors make such a valuable contribution for a Liverpool victory—even if it had to come at the other end of the pitch.

Derby Day and Beyond

It’s now 16 games unbeaten in all competitions for the Reds, with 11 of those being victories.

Next up it’s a big run of games: Everton in the FA Cup third round and Man City in the league, before a run of four games out of five away from home.

The Reds head into that period on the back of three successive victories, taking 10 points in 10 days while other sides around them have dropped considerable amounts.

It’s a tremendous run of form—and Klopp deserves enormous credit for managing it while switching up his team with regularity.

Balancing fitness and game time is as vital as last-minute winners in terms of the wider picture; the Reds were just a point off second as it stood at full-time and opening up a gap ahead of north London-based rivals for the top four.

A critical win, a great run of form; now onto the derby and dreams of cup success.