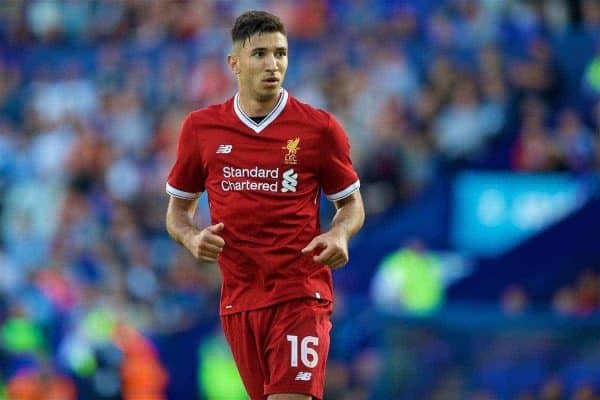 Liverpool midfielder Marko Grujic is set to join a Championship side on a six-month loan deal, despite heavy interest from sides in Turkey.

Grujic has featured sparingly for the Reds so far this season, making just six first-team appearances of which only one came as a starter.

The Serbian has been an unused substitute three times, typically missing out on Jurgen Klopp‘s matchday squad due to increased competition in Liverpool’s midfield ranks.

This has led to speculation over Grujic’s future, with the player’s representative revealing he is due a loan move this month when speaking in November.

Both Fenerbahce and Galatasaray have been credited with an interest, along with Brighton & Hove Albion, Huddersfield Town, West Ham and Aston Villa.

According to the Liverpool Echo, the latter is the most likely destination of those six, with Grujic destined for a half-season spell in the English second tier.

“Liverpool have been seeking guarantees that Grujic would start matches rather than simply be a squad player,” James Pearce writes.

“A host of Championship clubs having contacted the Reds to express their willingness to give him the regular first-team football he craves.”

Crucially, it is claimed that “Klopp rates Grujic highly and still sees him as part of his long-term plans,” with a loan within England designed to further his development.

Grujic is a strong, powerful midfielder with an eye for goal, and is able to operate in a number of roles, though he is currently best suited as a No. 10.

In his last season before joining the Reds in 2016, Grujic scored six and assisted seven in 29 games as Red Star Belgrade surged to the Serbian SuperLiga title.

But while his attacking merits are clear, Grujic would certainly benefit from focusing on his off-ball work, with a lack of defensive discipline clear since he’s moved to Merseyside.

Spending the rest of the campaign in the more physical climes of the Championship could provide the 21-year-old with the ideal apprenticeship.

It remains to be seen where he will end up, however, with Villa clearly not the only side to have expressed their interest.