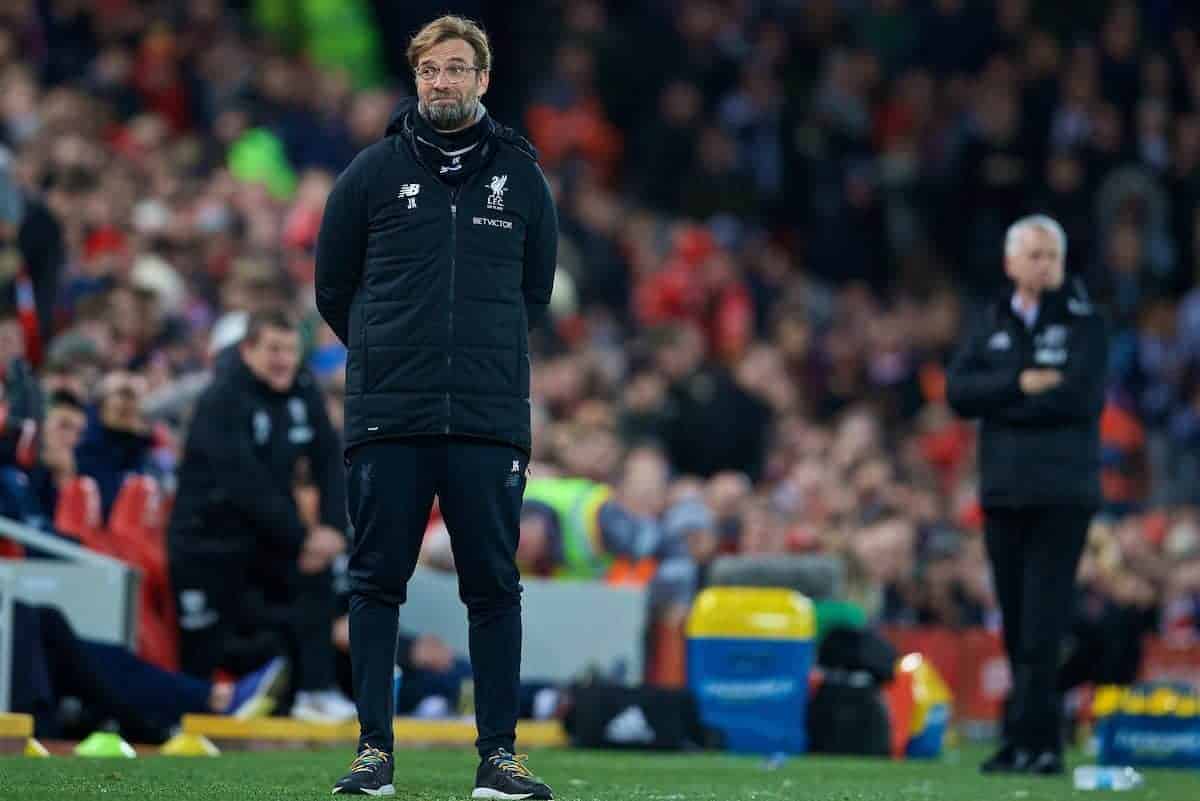 The media were critical of VAR and Liverpool’s performance, and called for transfer business to be conducted after the 3-2 FA Cup loss to West Brom.

The Reds suffered a dire second successive defeat to exit the famous cup competition in round four for the third season running.

Roberto Firmino gave Liverpool the lead, but not even VAR intervention could save Jurgen Klopp’s side falling 3-1 behind by half-time to Jay Rodriguez’s brace and Joel Matip‘s own-goal.

Mohamed Salah’s 25th goal of the season set up a grand slam finish but the Baggies held on to end Liverpool’s FA Cup hopes for another season.

Defeat was sadly no less than the Reds deserved for a dreadful performance, and here is how the media assessed a poor night at Anfield.

Unsurprisingly, VAR dominated reports and there was very little positive said as the media discussed its failings The Mirror’s David Maddock felt VAR ruined the momentum and joy of the game, and assessed this a key factor behind a low quality cup tie:

Such delays take not only the pace and momentum out of the game, they take the joy from it too.

Any tension and drama was drained from this game by the delays, which served only to destroy the concentration of the players and the officials.

For Goal.com, Melissa Reddy was critical over the lack of clear communication when VAR is in action:

VAR in theory is a good idea, but the implementation was heavily flawed: there was no communication around each process, too much time taken with every decision and it was not used sparingly.

The Mail’s Joe Bernstein thought the constant appeals from players to implement VAR also ruined the flow of the match:

Though it was a terrific game, a proper cup-tie, it was despite rather than because of VAR.

Advocates of the new technology will argue justice was served with the decisions but the appeals of the players to use/not use VAR after every incident ruined the game’s flow. Football will become a different sport if it’s use is widened like this.

Reddy pulled no punches, and labelled the display “utterly appalling”:

With so much in doubt during the encounter, there was a certainty: Liverpool were utterly appalling.

The Liverpool Echo’s James Pearce assessed this exit as the most painful of those in recent seasons due to the strength of the team Klopp selected:

For the third successive season under Klopp, Liverpool crashed out in the fourth round. But this one cuts deeper than those previous early exits to West Ham and Wolves because of the personnel on duty.

This wasn’t a second string line up packed full of kids, this was the strongest side Klopp could have picked but to a man they were hopelessly off the pace.

Looking ahead, our own Karl Matchett feels the pressure has now increased to claim a top-four spot and if that doesn’t transpire, the season will be a failure:

Top four this season in the league is now an absolute must, and anything less, after early domestic cup exits, will be seen as a failure.

ESPN’s Glenn Price was among certain reporters surprised by the Reds’ failure to produce any kind of response to defeat at Swansea:

Typically under Klopp, Liverpool have come out firing following a defeat; the 4-1 drubbing at Tottenham Hotspur in October, for example, kick-started the 18-game unbeaten run that ended at Swansea on Monday.

But this disjointed performance, with many players who are likely to feature at Huddersfield on Tuesday, does not inspire too much hope that a turnaround is forthcoming.

Matchett assessed the whole team at fault for the defensive mess:

The mistakes and blame lay everywhere: not tracking runners, missing tackles in key areas, not being alert to shift across and close out space and in basic decision-making.

Reddy felt the lack of protection afforded to the back-line from the midfield was a key problem:

The Reds midfield resembled an empty car park for large swathes of the game; there were so many spaces for the Baggies to pick from without any pressure.

The Reds boss has continuously insisted he is happy with his options and there is no pressing need for the club to enhance their roster before the January deadline, but the manner of the defeats against Swansea and West Brom strongly suggest otherwise.

Pearce believes Klopp is wrong to assess squad depth as “sufficient” and feels the season could hinge on whether ambition is shown and new players arrive before the deadline:

Fans want to see ambition and the Reds’ season, which now hinges on staying in the top-four and having a prolonged run in the Champions League, could depend on it.

Matchett bemoaned the lack of “game-changers” available from the bench:

But the Reds simply don’t have game-changers available to them right now and it’s natural that, after two defeats to average opposition, questions will be asked over the January transfer market and the club’s spending.

And Matchett assessed another attacking option as the most pressing requirement:

It’s obvious another forward option is needed. If Salah or Firmino go on a scoreless run, as can befall top attackers from time to time, where will the points come from to maintain a top-four challenge?

Klopp cannot possibly believe Ings will come through with eight or 10 strikes in the second half of the season, or some of the squad midfielders can even push half a dozen.

As you would fully expect, there was plenty of criticism for various individual performances

Firstly, the Liverpool Echo’s Andy Kelly felt the players let Klopp down by failing to show the competition the same respect as the German did:

Klopp showed plenty of respect for the FA Cup but his players simply didn’t respond with a performance worthy of the competition.

How he survived a whole hour is a mystery. Everything bad about the German was on display; half-hearted, ill-disciplined, weak in the challenge especially just after Liverpool opened the scoring. Stupid challenges that conceded free kicks and wasted time. As far from a captain’s performance as you’ll ever see.

Matchett was unimpressed by Klopp’s choice to keep Can as captain, and felt the midfielder failed in every aspect as his job as skipper on the night:

Wearing the captain’s armband has got to mean more than “who is available, who has been there longest.”

The players must look to the skipper for inspiration, the skipper himself must rally the team and organise throughout, as well as be an influence on the match. Can did none of that.

There’ll come a time when youth cannot camouflage such performances. Chosen to add attacking bite against an expected Albion rearguard action, not only were his defensive lapses obvious but his crossing when the Reds chased the game were abject.

The Dutchman, who was the hero in the last round against Everton, endured a night to forget. Joel Matip, alongside him, was no better. Communication appeared to be non-existent.