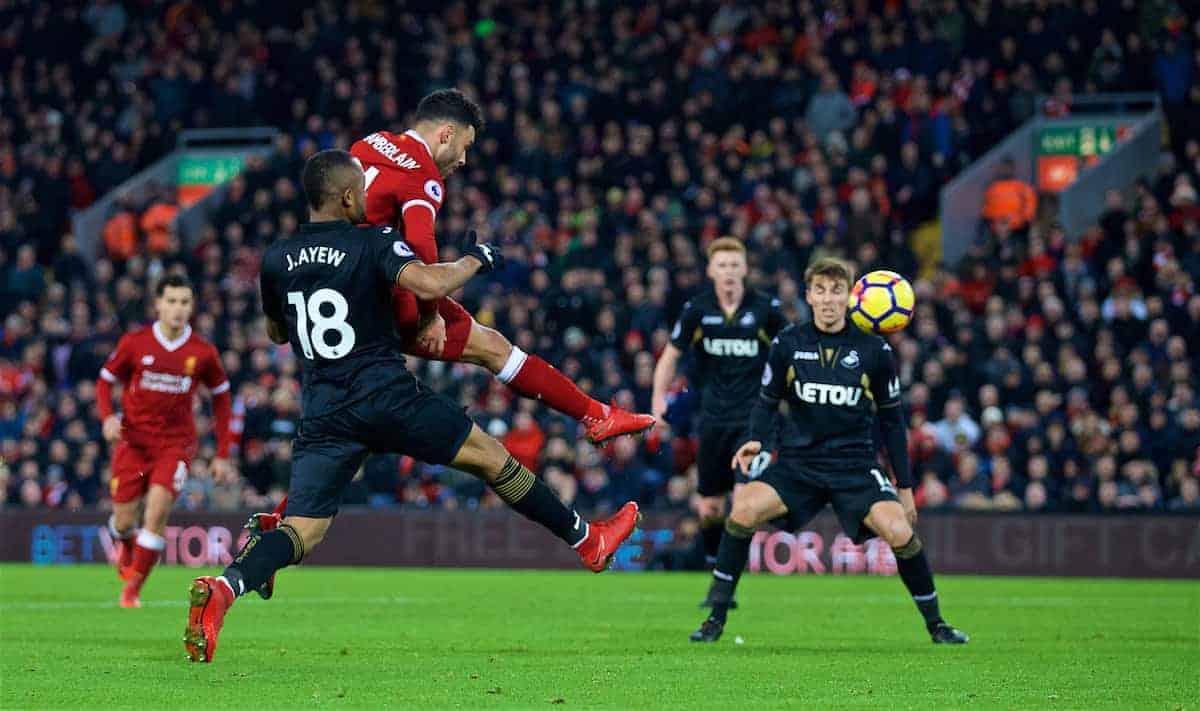 After an eight-day break, Liverpool head to the Premier League‘s bottom-placed side Swansea City on Monday night, looking for a sixth win in a row.

Last Sunday’s 4-3 victory over Man City was a momentous occasion for the Reds, as they ended the league leaders’ unbeaten record in stunning fashion.

The win lifted Jurgen Klopp‘s side to third in the table, and with every game that passes the more they look like the second-best team in the country.

Their current level of focus cannot afford to let up on Monday evening, however, as Klopp and his players head to struggling Swansea.

On paper, Liverpool should have far too much for their relegation-threatened opponents, but we have seen them come unstuck in these matches in the past.

There is such confidence flowing through this Reds squad, though, whether it be the energetic Andrew Robertson, reborn Alex Oxlade-Chamberlain or unplayable front three of Mohamed Salah, Sadio Mane and Roberto Firmino.

They have started finding ways to win ugly, which is crucial, and the addition of Virgil van Dijk should shore things up greatly at the back.

All of Liverpool’s rivals will have played by the time the match kicks off, so they will know exactly how the top-four battle is shaping up.

Three points are essential against a Swans side who have only actually lost once in five matches since Carlos Carvalhal took charge last month.

Van Dijk will start his first league game for Liverpool, and Salah and Ragnar Klavan should also recover from illness in time to be available. Dejan Lovren may struggle to be fit, though.

Jordan Henderson and Alberto Moreno are almost back in contention, and Klopp was also positive about Nathaniel Clyne‘s progress from a long-term back problem.

Joe Gomez was excellent again in his last outing, despite playing a negative role in Leroy Sane’s goal, and he should keep his place at right-back ahead of Trent Alexander-Arnold.

Joel Matip is expected to partner Van Dijk at the back, while the increasingly popular Robertson will again start at left-back.

Emre Can, Gini Wijnaldum and Oxlade-Chamberlain were all exceptional in the victory over City, so splitting them up makes little sense. James Milner and Adam Lallana are options, though.

The front three picks itself, with Klopp having no need to rest anyone at the moment.

Carvalhal has a near fully fit squad to choose from, and the hosts will be well prepared for the occasion after nine days without a match.

Last 5 at Swansea City (All Competitions) Away fans’ pubs: “A lot of away fans tend to head for the Harvester and outside bars for drinks near the stadium. The Landore Social Club is cheap and welcome to away fans,” Swans supporter Kevin Elphick told us.

One piece of advice for visiting fans: “Wind Street is full of pubs and bars and is worth a visit in the city centre before heading to the stadium.”

If Salah scores against Swansea, it will be his 25th goal of the campaign.

It would mean the 25-year-old overtakes Steven Gerrard and Daniel Sturridge‘s season-best tallies of 24 for Liverpool, in 2008/09 and 2013/14 respectively.

Speaking at Melwood on Friday, Klopp spoke about Swansea, praising their recent improvement under Carvalhal and stressing the importance of not taking them lightly:

“They are bottom of the table, that’s how it is, but they are on a good way,” he said.

“It will be different, we have to look at other games since they changed manager.

“As a Liverpool player you can’t perform one week and then not the next. We need to do it consistently.

“There are no easy games in the Premier League and Swansea’s not easy.”

The match finishes off the Premier League‘s weekend action, with coverage on Sky Sports Main Event getting started at 7pm (GMT). Kickoff is at 8pm.

Out matchday live blog gets underway at 7.15pm, with Ben Twelves bringing you plenty of interesting content before the game, and minute-by-minute updates during it.