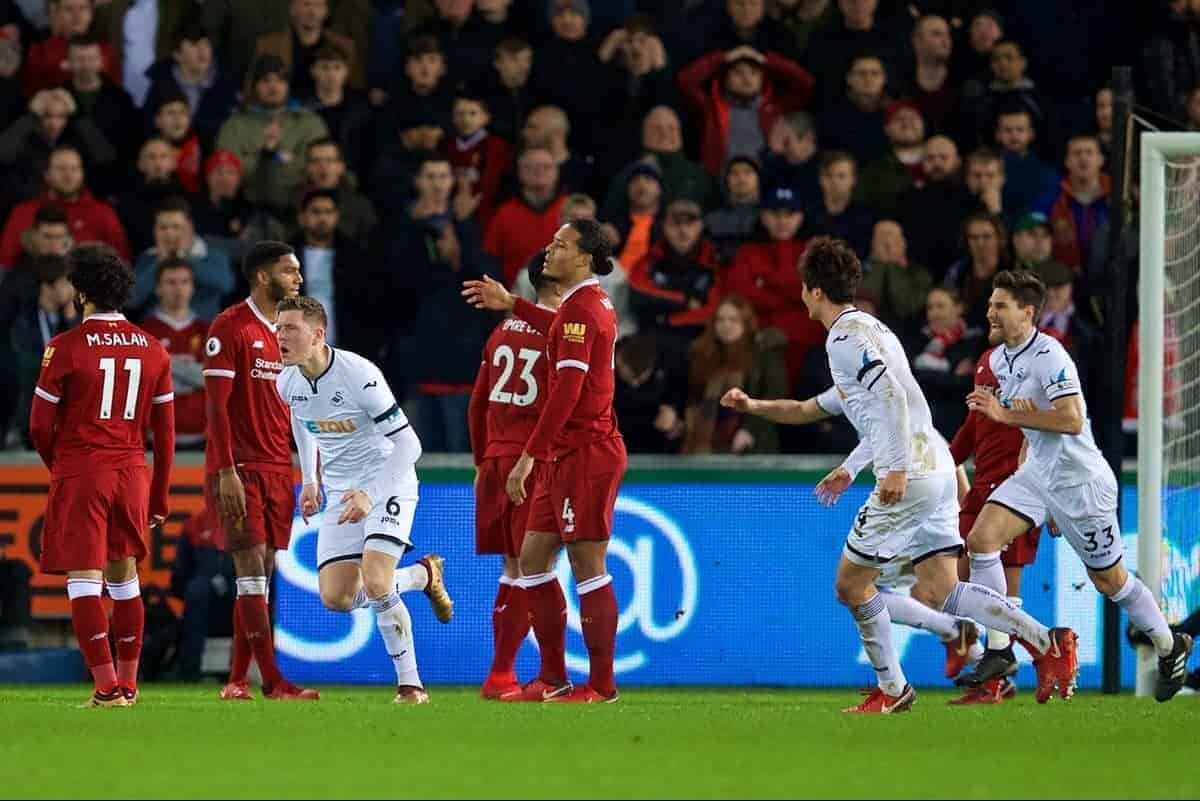 Liverpool produced a cowardly performance as their 18-game unbeaten run ended with a limp, losing 1-0 away to bottom-dwellers Swansea City.

Liverpool took to south Wales on Monday looking to extend their dominant stretch to 19 games, further lifted by the previous weekend’s 4-3 victory over Man City.

Jurgen Klopp made just one change to his starting lineup from that jubilant day at Anfield, with Virgil van Dijk replacing the absent Dejan Lovren to make his long-awaited Premier League debut.

The Reds were led by Emre Can, wearing the captain’s armband in lieu of Jordan Henderson and James Milner, who watched on from the comforts of home and the substitutes’ bench respectively.

Taking on a Swansea side enjoying a minor resurgence following the appointment of new manager Carlos Carvalhal, Liverpool were not certain on a win at the Liberty Stadium—and that proved to be the case.

With the Swans clearly hoping to not suffer the same fate as Boxing Day’s 5-0 defeat at Anfield, the hosts sat deep in the early stages as Liverpool probed for an opening.

It nearly came through Sadio Mane, who latched onto Can’s excellent lofted pass, but his touch saw the ball drift too close to Lukasz Fabianski.

At the other end, Jordan Ayew hit the back of the net following an error from Joe Gomez, but the ball was adjudged to have trickled out following a challenge from Alex Oxlade-Chamberlain in the buildup.

Having already netted on his debut in the FA Cup earlier in January, Van Dijk came close with another header from a corner, but the Dutchman’s effort sailed wide.

Mohamed Salah found himself in a similar position as Mane on the half-hour mark, benefiting from a sumptuous ball from Van Dijk but failing to hit the target with his volleyed effort.

It was Swansea who struck first, however, with Alfie Mawson swinging home after the Reds failed to clear a corner just before half-time. Klopp will have drilled into his side the importance of upping their intensity after the break, and they remained dominant, if not incisive, in the first 10 minutes.

Acknowledging the opportunity to exploit space on the flanks, Andrew Robertson was particularly influential in that respect, and almost found himself through on goal following a smart one-two in the box.

Salah, standing over the free-kick in the absence of the departed Philippe Coutinho, tested Fabianski from 25 yards, but was unable to find the corner as the Poland ‘keeper tipped it over.

With little in terms of game-changers on his substitutes’ bench, Klopp turned to Adam Lallana on 68 minutes, replacing the bright Oxlade-Chamberlain in a surprise move.

And soon after the lesser-spotted Danny Ings was thrusted into the fray, as an unsurprisingly anonymous Georginio Wijnaldum was withdrawn to accommodate another attacker.

Ings almost found the bottom corner with a rare chance with 15 minutes left to play, but his wild swing was met by a diving Fabianski as the Reds ultimately paid for their lack of impetus.