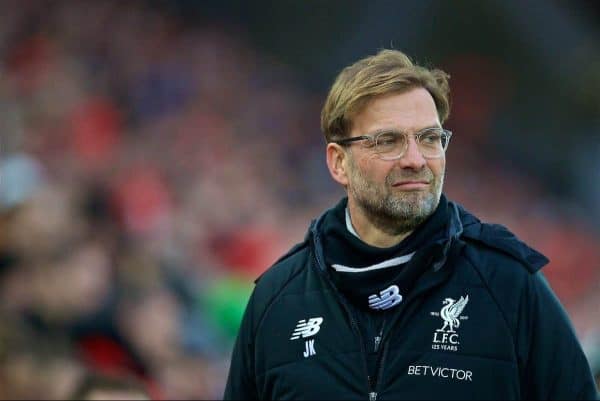 3 signings that can take Liverpool to the next level

We asked one of our writers, which three realistic signings would you make in order to make Liverpool title challengers next season?

Jurgen Klopp will have Naby Keita arriving this summer and if the manager can add a trio of high-quality players in key areas, the Reds can continue their progress under the German.

Strengthening the spine of the side is key for me, and here are three players I believe can make all the difference.

Loris Karius deserves real praise for a sizeable improvement in recent weeks, but there are still doubts about him going forward.

It is only fair that he has between now and May to show he can be Liverpool’s first-choice goalkeeper, but there is still a lot of convincing to do.

You only have to look at Man United to see how priceless an influential ‘keeper can be – who else is absolutely sick of the sight of David de Gea? – and Alisson would be the perfect recruit.

Brazil’s No.1 has been described as “the Messi of goalkeepers” by former Roma coach Roberto Negrisolo, which says all you need to know about his brilliance.

He is an expert shot-stopper and a renowned “sweeper-keeper” – he made six saves in Roma’s 2-1 loss to Shakhtar Donetsk on Tuesday, and enjoyed a passing accuracy of 89 percent – and at 25, he still has years ahead of him.

Liverpool have been hotly-tipped to make a big-money bid for Alisson this summer, and if they get a deal done, he could easily be their most significant defensive signing since Pepe Reina.

Recent reports have suggested that Klopp will keep his faith in Karius, but that feels like a risk. A great ‘keeper can win you 10 points a season.

The acquisition of Virgil van Dijk is massive for Liverpool, and in his short time at the club, the defence has already looked far more secure.

The Reds still lack a top-quality partner for the 26-year-old, however, with Dejan Lovren, Joel Matip and Ragnar Klavan all not good enough to feature regularly.

Many names have been thrown into the hat when it comes to summer arrivals, but one who could be a very shrewd purchase is Lazio’s Stefan de Vrij.

The 26-year-old will leave the Serie A giants on a free transfer at the end of the season, and if reports are to be believed, Liverpool will scrap with the likes of United and Arsenal for his signature.

Not only is De Vrij a highly impressive centre-back, he is also a compatriot of Van Dijk’s, meaning a fearsome pairing could be formed for both club and country.

We have seen how effective that can be at Tottenham, with Toby Alderweireld and Jan Vertonghen superb alongside one another in recent years.

There aren’t many available world-class defenders around in the modern game – most of them are tied down to their current clubs – but getting De Vrij on a free would be a masterstroke.

There is no guarantee that he would come in and be a game-changer, but his age, reputation and lack of a fee make luring him to Merseyside a no-brainer.

If the name Sergej Milinkovic-Savic doesn’t ring a bell right now, in the next few years it will.

The Serbia international is regarded as one of the most exciting young midfielders in world football, and Lazio will do very well to keep hold of him.

A box-to-box player who can run at opponents, out-muscle them and beat them in the air with his imposing 6ft 4in frame – an average of 2.5 aerial wins a match is highly impressive – he would add so much to an often one-dimensional Liverpool midfield.

Admittedly, his passing is seen as the weakest area of his game, with a 79.3 per cent accuracy far from earth-shattering in 2017/18, but that rawness will subside as the years pass.

With Emre Can looking almost certain to leave Anfield this summer, a major reinforcement will be required to team up with fellow new signing Naby Keita.

Milinkovic-Savic fits the bill to perfection, and if you think Can is a player blessed with great potential, the Lazio favourite is on another level.

It would be a huge buy if Liverpool could get it done, particularly in a long-term sense, but with many of Europe’s powerhouses hovering ominously, it will be tricky.

Let’s not forget that Lucas Leiva is now at Lazio, however, so the Brazilian can do his best to persuade both Milinkovic-Savic and De Vrij to join the Reds.

Marko Grujic can hopefully have a similar influence when he and Milinkovic-Savic meet up for international duty.