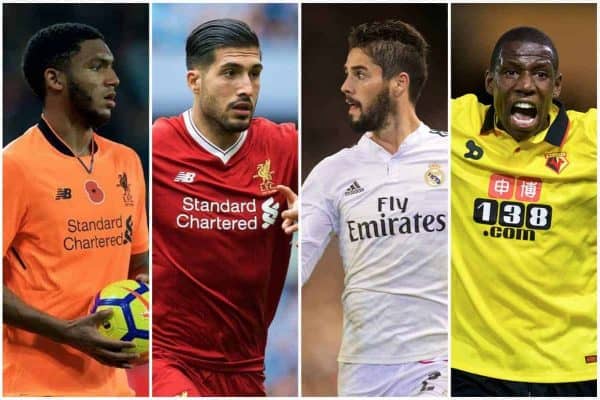 Latest on Joe Gomez’s injury, Emre Can to Juventus & Isco to Liverpool links

We round up the latest Liverpool news on Thursday, including a frustrating injury setback ahead of Sunday’s Premier League clash with Southampton.

Gomez a Doubt For Saints Clash

Joe Gomez missed last weekend’s 2-2 draw with Tottenham due to a minor knee injury, with Trent Alexander-Arnold shining in his absence.

The teenager’s performance at Anfield has led to calls for him to keep his place for the trip to St. Mary’s to take on the Saints, and this is now likely to be the case.

According to the Liverpool Echo‘s James Pearce, Gomez is yet to return to training as the Reds round off their preparations for another crucial encounter.

Despite the injury not feared to be serious, Jurgen Klopp “won’t take any chances” with the fitness of a player who has already spent a significant portion of his young career sidelined.

It must be stressed, however, that the issue is with the opposite knee to that which kept Gomez out for 465 days from late 2015 to early 2017.

Juventus Make ‘Huge Offer’ For Can

The chances of Liverpool keeping hold of Emre Can beyond the end of the season are increasingly slim.

With the German now able to discuss terms with clubs outside of the England, he looks set to reach a pre-contract agreement with long-term suitors Juventus.

According to the Mirror, the Serie A side were represented at Anfield last weekend and “have made him a huge offer” to become their latest free signing.

It is claimed that Liverpool “have not given up” on the possibility of convincing Can to stay, but it seems highly likely that he will leave.

The failure to replace Philippe Coutinho in the January transfer market saw Liverpool widely criticised, but Klopp was not willing to spend “crazy money” to secure his targets.

Instead, he has opted to wait for the summer, with the Reds likely to go all out to fill the void left by their old No. 10.

This coincides with timely speculation over the future of Real Madrid playmaker Isco, with Spanish publication AS claiming Zinedine Zidane has “decided to sell” the 25-year-old.

AS later speculated that Liverpool, along with Man City, Juventus, Bayern Munich and Arsenal, could be a possible destination if he does depart.

This is highly tenuous at this stage, but an arrival of the calibre of Isco would lift the Reds further towards their goals.

FourFourTwo are currently serialising their excellent interview with Mohamed Salah this week, and you can watch it in the video above.

Elsewhere, the Mail claim that the Reds could be among the sides vying for Watford midfielder Abdoulaye Doucoure this summer, rivalling Spurs and Arsenal.

Liverpool academy coach Michael Beale could be set to leave the club just five months after returning from an ill-fated spell with Sao Paulo.

He is currently working with youngsters between U6 and U11 at Kirkby, but he has entered talks with League One side Oxford United over the vacant manager’s role.

And finally, Roberto Firmino has been awarded Liverpool’s Goal of the Month award for January, for his sumptuous chip in the 4-3 win over City at Anfield. Well done, Bobby!