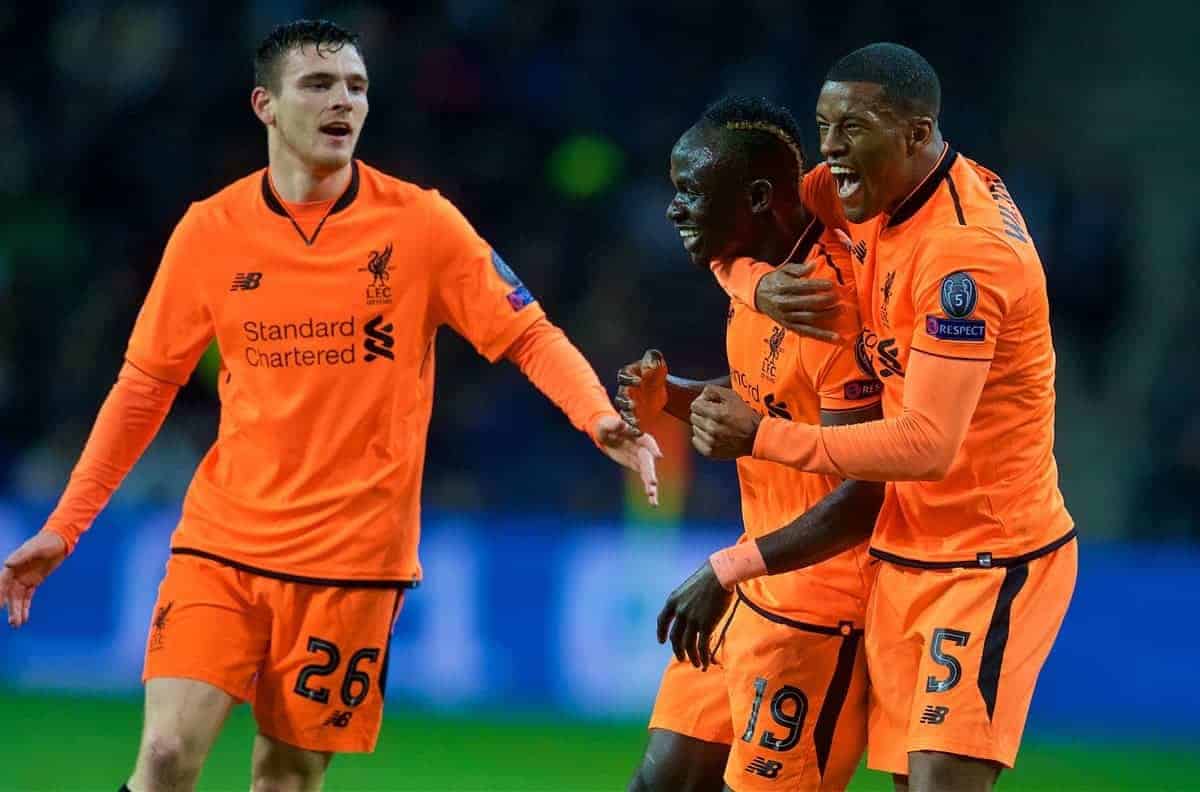 Liverpool romped to a famous Champions League victory on Wednesday night, comprehensively winning 5-0 away to a beleaguered Porto side.

It had been nine long years since the Reds last had a knockout stage game to look forward to in Europe’s top club competition—the quarter-final loss to Chelsea in 2009.

Klopp made three changes to the team that beat Southampton 2-0 on Sunday, with Dejan Lovren, Jordan Henderson and James Milner all starting.

Joel Matip, Emre Can and Alex Oxlade-Chamberlain were the trio to make way, with Can ruled out through suspension.

Trent Alexander-Arnold retained his place at right-back despite Joe Gomez being available, while Loris Karius was preferred to Simon Mignolet in goal, as expected.

Liverpool didn’t settle well in the opening exchanges on a soaking wet night in Portugal, with the hosts threatening more early on.

Otavio so nearly put Porto in front after nine minutes, but a last-ditch Lovren block saw the ball loop inches over Karius’ crossbar.

Andrew Robertson, making his Champions League debut, fizzed a long-range effort over, as the Reds started to grow into the game.

Mohamed Salah had a wonderful chance to tee up Sadio Mane for the opener, but his pass across the penalty area was cut out crucially.

Liverpool were 1-0 up midway through the first half, however, as Mane’s shot squeezed through Jose Sa’s hands in horrendous fashion for the goalkeeper.

It was the kind of cheap goal the Reds simply haven’t been gifted this season.

Four minutes later, the Reds were in dreamland, as Milner’s wonderful curled effort hit the post and Salah eventually turned in the rebound, after some typically quick feet.

Soares came perilously close to reducing the arrears just before half-time, but barring that and a slightly shaky start, it had been an almost perfect 45 minutes for Klopp and his players. It was a scrappy beginning to the second half, with neither side finding any rhythm in final third.

Liverpool were 3-0 up seven minutes after the restart, though, as Mane finished off a stunning move started by the irrepressible Roberto Firmino.

The Brazilian’s flick found Salah, who found him with a return pass, and although his shot was kept out by Sa, Mane was on hand to fire home.

The home crowd fell completely flat after the Reds’ third goal, and Firmino almost got on the end of Alexander-Arnold’s cross.

Firmino wasn’t left frustrated for long, as Milner’s cut-back was ruthlessly dispatched by the former Hoffenheim man, who netted his 21st goal of the season.

The remainder of the game was seen out with consummate ease by a rampant Liverpool outfit, on a special European evening for the club.

It was a result beyond anyone of a Reds persuasions’ wildest dreams, and a place in the quarter-finals is now surely secured.