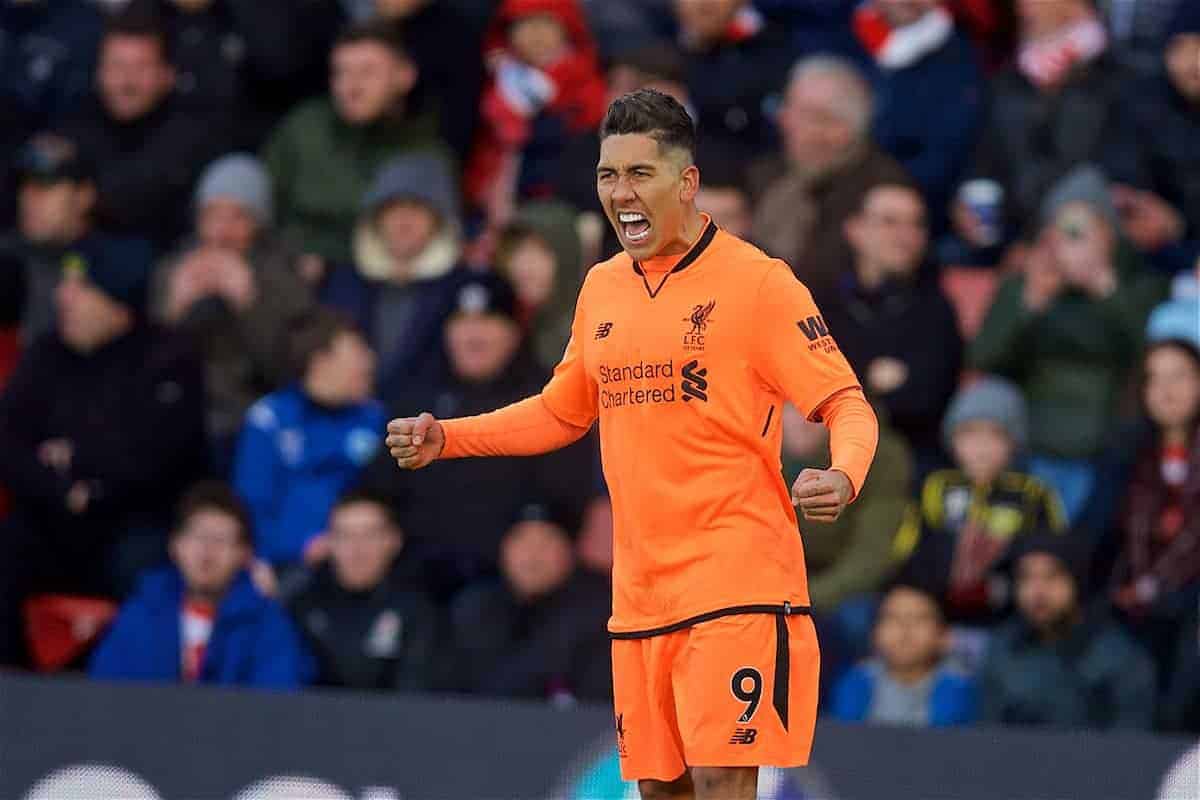 Liverpool breezed to a 2-0 victory at Southampton on Sunday afternoon, with Roberto Firmino and Mohamed Salah twice linking to devastating effect.

A response was needed at St Mary’s, with Spurs’ win over Arsenal on Saturday putting them one point clear of Liverpool.

Jurgen Klopp opted for three changes, as Joel Matip came in to partner Virgil van Dijk at centre-back. It deprived Dejan Lovren of a start against his former club.

Gini Wijnaldum and Alex Oxlade-Chamberlain also came into the team, with Jordan Henderson rested ahead of Wednesday’s Champions League encounter with Porto and James Milner the other player to make way.

Man United‘s 1-0 defeat at Newcastle earlier in the day meant the chance was there for Klopp’s men to narrow the gap on their second-placed rivals to two points.

Liverpool were ahead in just the sixth minute, with Salah laying on a lovely assist for Firmino, who fired home his 20th goal of the season.

Southampton responded well from the goal, with the Reds pinned into their own half for 10 minutes or so, and Loris Karius saved well to deny Pierre-Emile Hojbjerg.

Sadio Mane fired wide from 20 yards, as the visitors started to improve again, but Guido Carrillo headed straight at Karius at the other end.

The German again saved his team with 29 minutes on the clock, tipping Jame Ward-Prowse’s header over the crossbar.

Mane poked wide, with chances coming at either end, but Liverpool were a little flat throughout the first-half.

However, the lead was doubled just before half-time, with Firmino returning the favour to Salah in sensational fashion, flicking the ball through. The Egyptian slotted home clinically.

Kicking on and not being sloppy was the order of the day after the break, and Salah almost made it 3-0, shooting over with the goal at his mercy.

Liverpool were suddenly in total control against their struggling opponents, although Wesley Hoedt did come close to pulling a goal back from close-range.

Milner replaced Oxlade-Chamberlain just before the hour mark, and the former Saint looked disappointed as he trudged off the field.

Wijnaldum, still looking for his first away Premier League goal, fired into the away supporters, and an Emre Can strike sailed even higher into the stand.

Firmino was denied by the feet of Alex McCarthy, and from the follow-up, Salah shot into the side-netting. The Reds pair were stealing the show.

Mane, again not at his best, missed the target with his left foot, and with the score still 2-0, Liverpool weren’t totally in the clear.

Lallana missed by inches in the final minutes, and it was the last moment of note on an excellent day for Klopp’s side.

The win takes Liverpool back into third in the Premier League, but attention now switches to Champions League commitments.

Next Match: Porto (away, Wednesday 14 February)