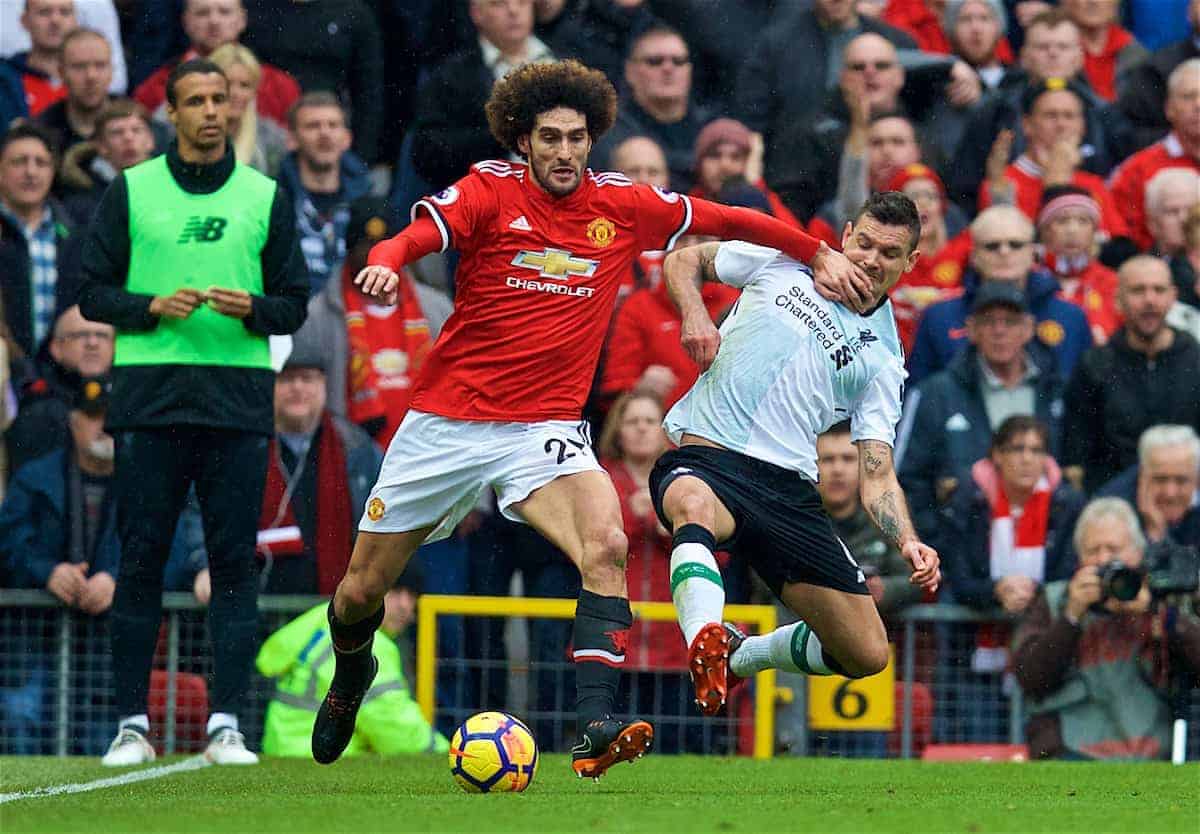 Liverpool were defeated 2-1 by Man United on Saturday, with a number of individuals fluffing their lines at Old Trafford.

Much has been made of Dejan Lovren‘s good form since his dreadful afternoon at Tottenham back in October, and much of the plaudits coming his way have been fully merited.

It is plain to see that Liverpool must still upgrade on the Croatian in the summer, however, and he cost the Reds in another big game on Saturday.

He was bullied by Romelu Lukaku all afternoon, and it was his poor attempt at a header that led to Marcus Rashford opening the scoring.

The 28-year-old didn’t cover himself in glory for Rashford’s second, again not doing enough aerially, and he never recovered from then on.

Two pathetic lunges on Marouane Fellaini late on summed up the way in which his head had gone, and a ludicrous shot in the dying seconds was lucky to deflect for a corner.

Lovren is a good defender, but a meltdown is never too far away—Liverpool may well have won with a better centre-back alongside Virgil van Dijk.

If he stays in the back line, the Merseysiders will forever remain shaky at times. It was no great surprise to see Trent Alexander-Arnold preferred to Joe Gomez at right-back, following some excellent displays in his fellow Englishman’s absence.

The teenager was another who was targeted by a typically well-drilled United outfit, though, and he looked a weak link for Liverpool.

He allowed Rashford to run off him far too easily for the opener, and time and time again United saw his and Lovren’s area of the pitch as one to exploit.

Needless fouls for a high boot summed up a deeply frustrating day for Alexander-Arnold, but this is all part of the learning process.

It resembled his performance at Old Trafford last season, when he looked similarly overawed by the occasion.

This has a been a season to remember for Mohamed Salah, Sadio Mane and Roberto Firmino, having registered 68 goals between them.

Many were tipping them to rip to shreds a United defence that features two former wingers at full-back, but they never got going at Old Trafford from minute one.

Firmino looked the most dangerous of the three, but for all his effort levels he lacked the same influence that has shone so bright since August.

Salah was well short of his best, and was kept very quiet by the dogged Ashley Young, and his stoppage-time volley that whistled over the bar epitomised his disappointing afternoon.

Mane became more of a threat as the minutes ticked by, but he looked horribly slack in terms of his first touch and use of the ball throughout, and attacks seemed to fall apart around him.

Jose Mourinho deserves credit for stifling them, but this was a day in which the ‘Fab Three’ never quite clicked at any point.

At half-time it was understandable why supporters will have been livid at the rather gutless performance by their beloved Reds.

Jurgen Klopp cut an equally unimpressed figure on the touchline, but the manager clearly laid into his troops at the interval.

Liverpool completely dominated the second half, due in part to United allowing them the ball, and their quality improved immeasurably.

Eric Bailly’s comical own goal gave the Reds hope midway through the second half, and they kept going right until the final whistlem and could easily have had two penalties for fouls on Salah and Mane.

Craig Pawson never does us any favours, does he?

It was one of those games that never quite felt as though an equaliser was coming, but hats off to Klopp and his players for a big improvement after a woeful first 45 minutes.

A Minor Speed Bump in the Season Defeats to United have hurt far more than this one, and the key now is that the result is not overblown in hysterical fashion.

Prior to the match, Liverpool had lost just once in their last 20 Premier League games, and coming unstuck at Old Trafford is never a disaster.

While a second-placed finish still has to be the aim this season, whether you come second, third or fourth is largely irrelevant.

Don’t forget, no English teams will have to go through the qualifying rounds of the Champions League next season.

What is vital is that the players don’t spend their time licking their wounds, with the Reds still well-placed in the league and having a big quarter-final to look forward to.

This is an excellent Liverpool outfit who just didn’t find their best form—that happens in football from time to time.