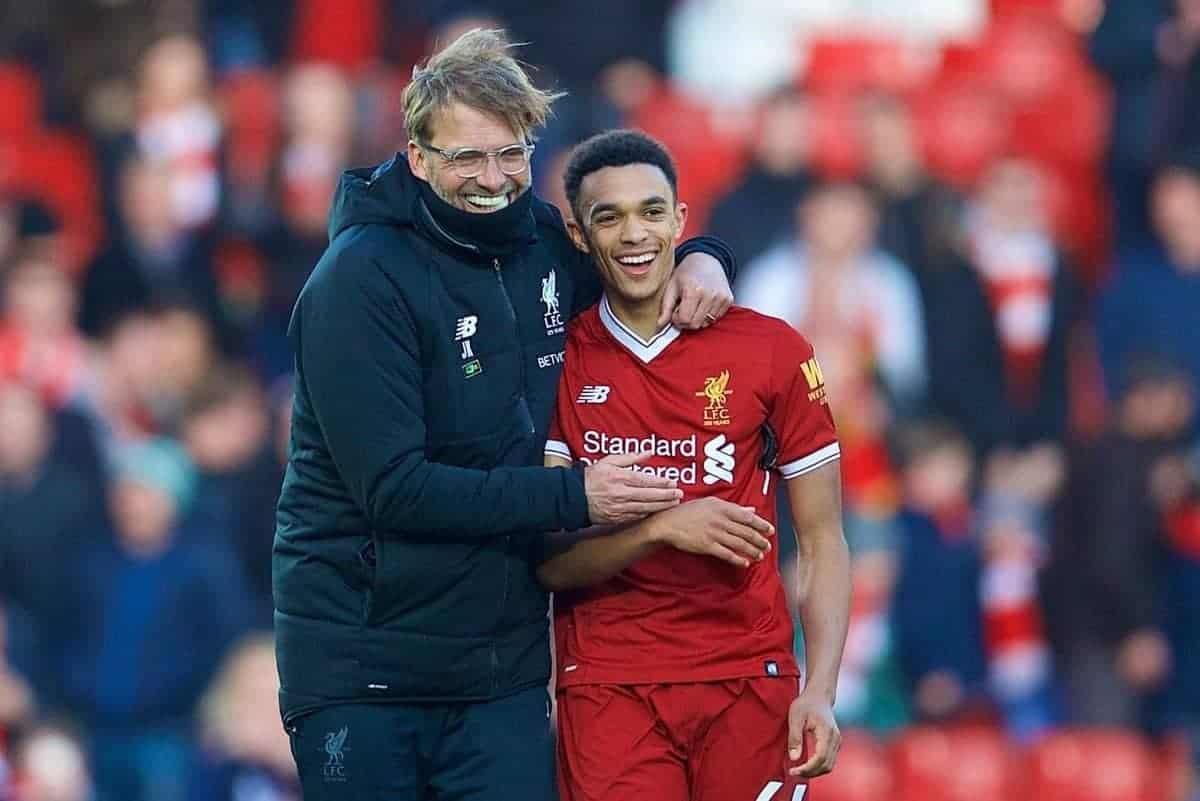 Nearing the end of Klopp’s second full season on Merseyside, the Reds are in position to finish the campaign with their best league placing since 2013/14.

Having won 5-0 at home to Watford last time out, their fourth victory in the last five games, they are behind only City and Spurs as the Premier League‘s form side.

But this weekend brings a considerable challenge for the Reds: playing away from home, in an early kickoff, in their first game back after the international break.

This tricky triumvirate sets the bar high for Liverpool as they look to keep up the pace in the top-four race, but the trip to Croydon provides the chance to overcome the odds and break a disappointing run. Klopp will reach his first century of league games in charge of Liverpool on Saturday, with 20 of his 99 so far being early kickoffs (on or before 1.30pm): 20.2 percent, or one every 4.95 outings.

The Reds have played a further two in all competitions, both in last season’s FA Cup, with his average of early kickoffs over his 143 games at the club at 15.4 percent.

Of those 22 games, Liverpool have won just seven, drawing six and losing nine, with their victory rate standing at just 31.8 percent: Given Klopp’s overall win rate with the club is 52.5 percent, with this rising to 56.2 percent in kickoffs after 1.30pm, this is a considerable drop in performance.

This season, the Reds are yet to win any of their early kickoffs, drawing 3-3 with Watford on opening day at Anfield, then 5-0 away to City and a 0-0 draw (home) and a 2-1 loss (away) to United.

Combining this with Liverpool’s fortunes in games directly after the international break and there are clear pitfalls awaiting Klopp’s side at Selhurst: Though they fare slightly better here, the win rate of 40 percent is still lower than Klopp’s overall record—away from home it remains the same, with two wins in five games on the road after an international break.

Liverpool have won one, drawn one and lost one of their three post-international clashes so far this season, with their victory coming at Anfield.

But that 3-0 triumph over struggling Southampton could provide encouragement for the Reds as they head down the M40 for the weekend’s meeting with Palace.

Klopp saw 16 of his first-team squad head off for pre-World Cup friendlies and European U21 qualifiers this month, with only eight remaining. With those players returning to Melwood on Monday, the rest of the senior internationals have since made their way back to Merseyside, with the majority still fit.

Only Joe Gomez and Emre Can are carrying injuries, while Andrew Robertson came off as a precaution in Scotland’s 1-0 win over Hungary but has since returned to training.

Given the depth at full-back and in midfield, the Reds can still take to the field on Saturday with a formidable lineup, with the likes of Karius, Matip, Moreno and Milner now well-rested.

Furthermore, both Roberto Firmino and Mohamed Salah were left out of their national teams’ final friendlies of the break, ensuring the on-fire duo are refreshed for the weekend.

The hope will be that, rather than their poor record in early kickoffs and after international breaks, the Reds will be able to focus more on their excellent current form.

They are taking on a Palace side with just one win in their last five games, are just two points off the relegation zone and have the fifth-worst goal difference in the league (-18).

Meanwhile, Liverpool have won four of their last five, are two points off second and have the second-best goal difference in the league (+39).

Furthermore, the Reds were winners on each of their last three trips to Palace, and took all three points in the reverse fixture at Anfield back in August.

Perhaps most importantly, in Salah they can field the Premier League‘s runaway top goalscorer (28), who has also registered the third-most assists of any player in the English top flight (10); he’s failed to score in just two of his 12 starts this year.

These are the records that Liverpool can embrace as they make their way south looking for another three points.