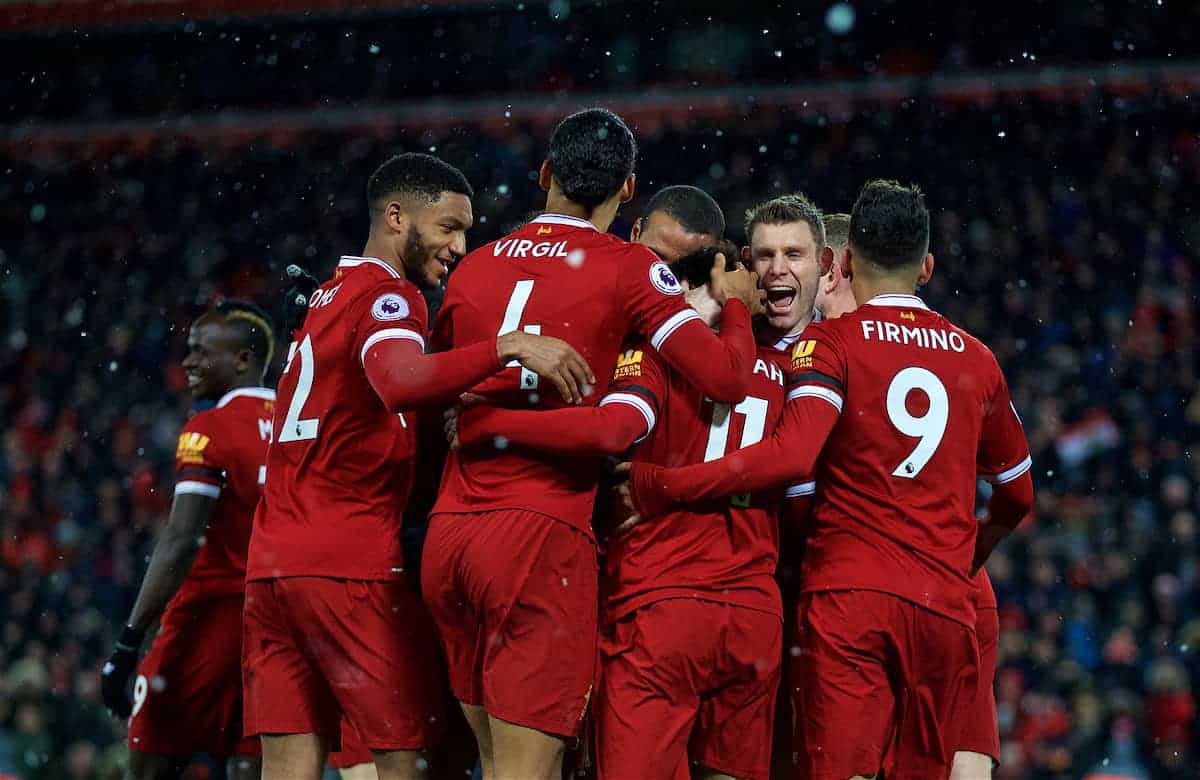 Mohamed Salah put in an display of goalscoring which puts him in pole position to finish the season as the league’s top scorer.

Had nothing to do really.

Collected a Richarlison header and watched a Roberto Pereyra free-kick hit his crossbar.

Was probably cold, so gets a mark above average for seeing that out and playing a few decent long passes out to team mates. Looked more solid than Trent defensively, but also had some good moments working the ball out in attack.

Maybe while he’s on England duty we’ll learn if he can play centre-back or not.

Looks composed on both sides of the ball and showed he deserves to keep his place for the bigger tests to come.

Not bad at taking throw-ins, either.

Made one sloppy pass out from the back but there were also a few good ones.

Against better teams the wayward passes might be more problematic, but Watford weren’t very good so it didn’t mater.

Made a good block to stop Stefano Okaka making anything of a chance towards the end of the game.

See above, but with fewer errors.

Was the team’s best passer with 91 percent accuracy, and won four aerial duels.

Gets the assist for Salah’s second goal with a great cross from which anyone could have scored.

Probably the best left-back in Europe.

Started the game well with some good tracking back, stopping opposition counter-attacks before they were able to get going.

Some of his passing choices were poor, though, especially one which put Wijnaldum in trouble and led to a free-kick.

There was also an unfortunate moment in the first period where he appeared to tackle himself, which led to a good Watford chance, and he gave the ball away again shortly after in what was a disappointing few minutes for him.

Exited the pitch early with a back injury.

The manager and player don’t think it is too serious, and he could even be available for international duty.

Could still be struggling to regain fitness following his illness, but it was one of his quieter displays on the ball.

Ran into trouble in more attacking positions, but this was to be expected against a team playing a back five and two No. 6s.

Did a decent stint in defence however, coming out of the game with a few tackles and an interception to his name.

One of the best goalscoring performances since the days when Luis Suarez used to put several past Norwich for fun.

Even kicked off his evening with a right-footed strike, but the bit of skill to sit Miguel Britos down on the turf was more of a highlight than the goal itself.

Turned in Robertson’s cross for his second, somehow stayed on his feet long enough to roll the ball past Orestis Karnezis for the hat-trick goal and was on hand to turn in the rebound from Ings’ shot for his fourth.

Even on top of all this he was dangerous from free-kicks, his corners looked threatening and he assisted Firmino’s goal.

Top of the goalscoring charts and best player in the league.

His goal summed up his inventive play which combines hard work with excellent technique.

Turned in Salah’s cross with a skilful flick round the back after working to get in the right area of the box.

On one occasion he lost his footing but still managed to get a cross in while he was on the floor.

Defends too. The amount he is able to do in one game is almost as unbelievable as his goal celebrations. Doesn’t have the neat and tidy deliberateness of the other two, but is still effective and adds an important dimension to the team.

Good play for the second, as he fed Robertson down the left, and also played a part in the hat-trick goal with some good work down the right before finding Salah.

Came on for Can early on in the game, and did a reasonably solid job.

Brought some extra energy to a fairly sluggish midfield.

Couple of good efforts but the goal still evades him. Looks more like scoring than Dominic Solanke. Has turned Salah and Firmino into world beaters. They’re two players who had struggled under their previous managers in the Premier League, but Klopp has found the perfect role for them both in a style which suits them.

The return of Gomez as right-back was a successful move from the manager, although his midfield didn’t seem to click.

Left Adam Lallana out of the squad and is hoping the midfielder will be able to pick up some match time on international duty.