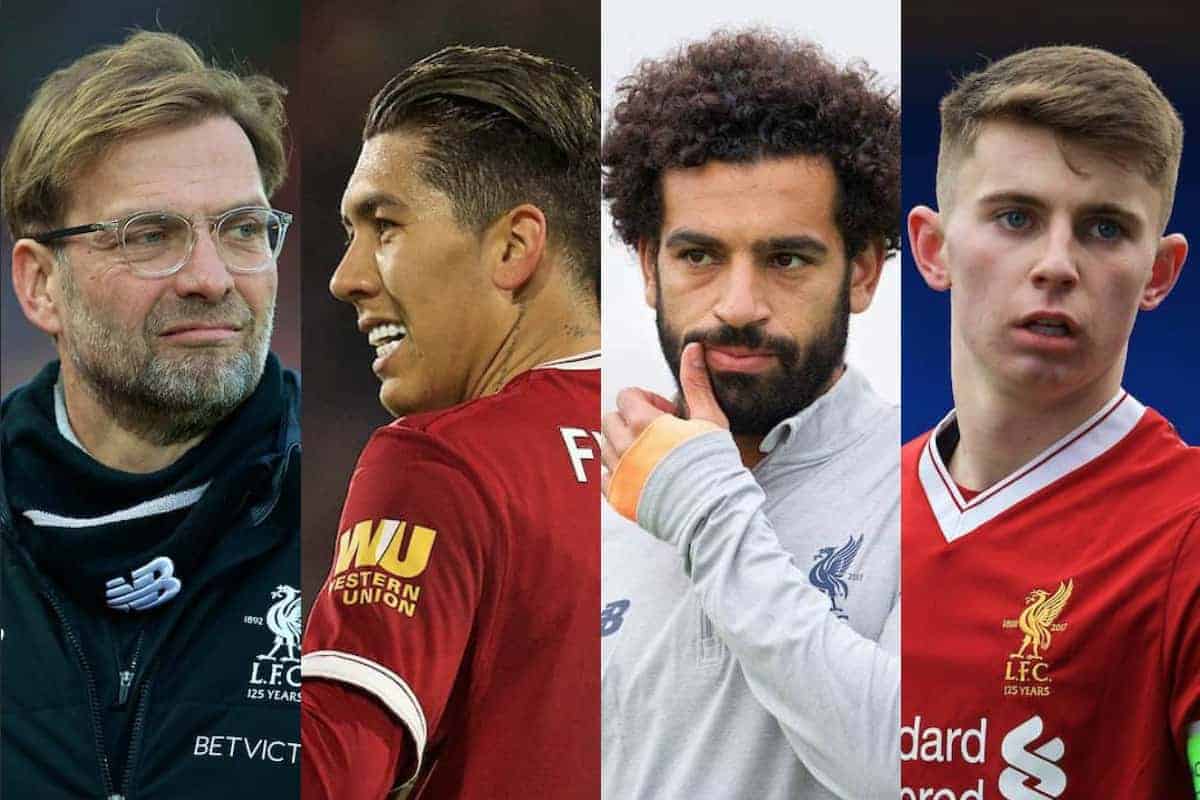 We round up the latest Liverpool FC news and rumours on Wednesday, with speculation over Jurgen Klopp‘s future shot down by his agent.

From one rumoured switch to Munich to the next: a day after unfounded reports of Bayern’s interest in Roberto Firmino comes further scrutiny over Klopp’s future.

Klopp has been touted as a possible replacement for the outgoing Jupp Heynckes in the summer, but speaking to German outlet Sport1, his agent ruled out a move to the Allianz Arena until at least 2022.

“Bayern and Klopp—that would fit. But it’s not something that’s an issue right now.

“Bayern is looking for a coach this summer, but Jurgen still has a long contract. At the moment Jurgen is not thinking about training any other club than the Reds.”

As two of Liverpool’s key players, all eyes were on both Roberto Firmino and Mohamed Salah ahead of Brazil and Egypt’s final friendlies of the international break.

After both Joe Gomez and Emre Can were forced out of duty with injuries, concern over further withdrawals spread ahead of Saturday’s trip to Crystal Palace.

But while the likes of Virgil van Dijk, Alex Oxlade-Chamberlain and Sadio Mane were all in action, Firmino and Salah were left out by their respective managers.

Firmino was an unused substitute in Brazil’s 1-0 redemption act away to Germany, and Salah also remained on the bench throughout Egypt’s 1-0 defeat to Greece.

The pair were expected back at Melwood for training on Wednesday, and will no doubt start at Selhurst Park.

Klopp’s faith in youth is one of the key factors behind his popularity at Liverpool, and the German is being rewarded with a host of swiftly developing stars.

Two of those are Ben Woodburn and Rhian Brewster, who are both included in Goal‘s list of the 50 best teenagers (born before January 1, 1999) in world football.

It could be that by this time next year Curtis Jones makes his way onto the list too. The Hillsborough disaster looms large over any debate into whether to implement safe-standing areas into stadiums in England.

Liverpool supporters’ group Spirit of Shankly are working closely with survivors and families affected by the disaster to discuss the merits of rail seating, and will visit Celtic Park to explore the system on Saturday.

Spirit of Shankly explained the process in a statement on Wednesday morning:

Thanks to the generosity of Celtic, SOS will attend the match versus Ross County. We will be accompanied by fellow supporters, Hillsborough families and survivors. This trip will be an opportunity for us to see the rail seating section first-hand and to ask questions of those responsible for its safety. As well as hearing about the Celtic experience, some of those attending will also be watching the match from the rail seating section.

We fully appreciate the sensitivities around this visit. This will be a difficult experience for some, and one that should not be under-estimated. We invited both Hillsborough groups to attend and we are grateful to those who are able to.

We understand that rail seating may not be for everyone. We want to make clear that any such visit is not an endorsement, nor a pre-cursor to calling for it at Anfield. We expect that following the visit, our discussions and viewpoints will be informed further. We anticipate that after this visit, we will update supporters and have further discussions about what, if any, further steps we take.

If anyone has any questions they would like putting to Celtic, their staff or supporters, or if you have any questions about the visit itself, please email [email protected].

Robertson on Gaining Experience at Liverpool

An increasingly popular figure at Anfield, Andrew Robertson enjoyed a positive end to the March international break with Scotland’s 1-0 win away to Hungary.

The left-back is now one of the most important players in Alex McLeish’s squad, and he believes his development at Liverpool can aid his country’s cause down the line.

“I’m progressing day by day down there, working under a fantastic manager and with unbelievable players,” he told BBC Sport.

“That can only help my game and hopefully, as I’m one of the more experienced players with Scotland, I can help these lads.”

Robertson suffered a knock in Tuesday night’s victory but is unlikely to miss this weekend’s clash.