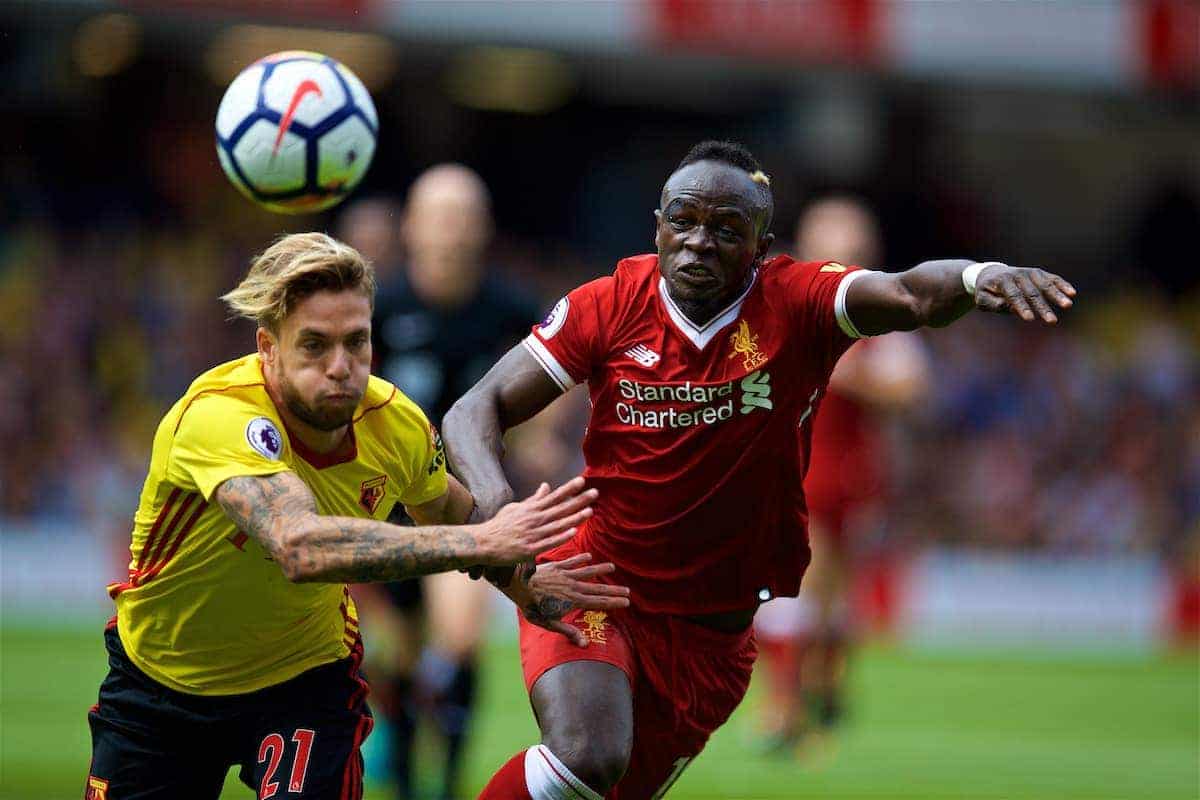 Liverpool and Watford face each other in the Premier League on Saturday evening, in another must-win Anfield clash for the Reds.

Last weekend’s 2-1 defeat at Man United was a blow, with Jurgen Klopp‘s side disappointingly flat for too much of the game.

Losses away to your rivals can always happen, though, and it must be consigned to history, rather than act as a momentum-killer this season.

Liverpool have a great chance to get back to winning ways on Saturday, as a Watford side with little to play for head to Anfield.

The Hornets have enjoyed a very respectable campaign, currently sitting 10th, which goes to show that they shouldn’t be underestimated.

The 3-3 draw on the opening weekend of the season showed that they can cause the Reds problems, although Klopp’s men have grown since that sloppy afternoon at Vicarage Road.

Having been afforded a week without a game, Liverpool should be perfectly prepared for this match, as they look to get back to winnings ways.

They have not lost at home in the league in 2017/18, and that shouldn’t be any different once the final whistle blows on Saturday.

United, Tottenham and Chelsea are all in FA Cup action, meaning Klopp’s men can pull clear of the Blues, go ahead of Spurs again and make ground on their fiercest foes.

A repeat of the professional 2-0 win against Newcastle United a fortnight ago would be just fine.

There are no new injury problems for Klopp to worry about it, with the gaps between matches working nicely in his favour at the moment.

With an international break next on the horizon, the manager can field a full-strength and not worry about potential fatigue.

Trent Alexander-Arnold and Dejan Lovren could be replaced by Joe Gomez and Joel Matip respectively, following poor displays at Old Trafford, but it wouldn’t be a surprise if Klopp showed faith in the pair.

Jordan Henderson was left out against United, but the skipper is in line to return on Saturday, with Gini Wijnaldum and Adam Lallana also pushing for starts.

The front-three of Mohamed Salah, Sadio Mane and Roberto Firmino are all fit and available, and there is no reason to leave any of them on the substitutes’ bench.

Centre-back Craig Cathcart is available, though.

Last 5 at home to Watford (All Competitions)

Salah needs one more goal to go level with Fernando Torres’ tally of 33 back in 2007/08 – the Spaniard’s first season on Merseyside.

The most goals in a campaign by a Liverpool player in the Premier League era is 36, scored by Robbie Fowler in 1995/96.

Salah has a wonderful chance of beating that record, should he stay fit between now and May.

Klopp didn’t have too much to say about Watford in his pre-match press conference, but fumed about next month’s Merseyside derby switching to a Saturday lunchtime kick off, in between Champions League clashes with Man City:

“We play 7.45pm on Wednesday night and then 12.30pm on Saturday,” Klopp told reporters.

“That extra five hours means the world in terms of recovery – why not have it at 3pm, rather than after breakfast?

“Other leagues [reschedule] the entire game for another time to help their teams prepare; we play three days later.

There are just four Premier League fixtures this weekend, due to the FA Cup quarter-finals, and Liverpool’s visit of Watford is the only televised league match.

Chris Williams is in charge of our matchday live blog, which will be available from 4:45pm.