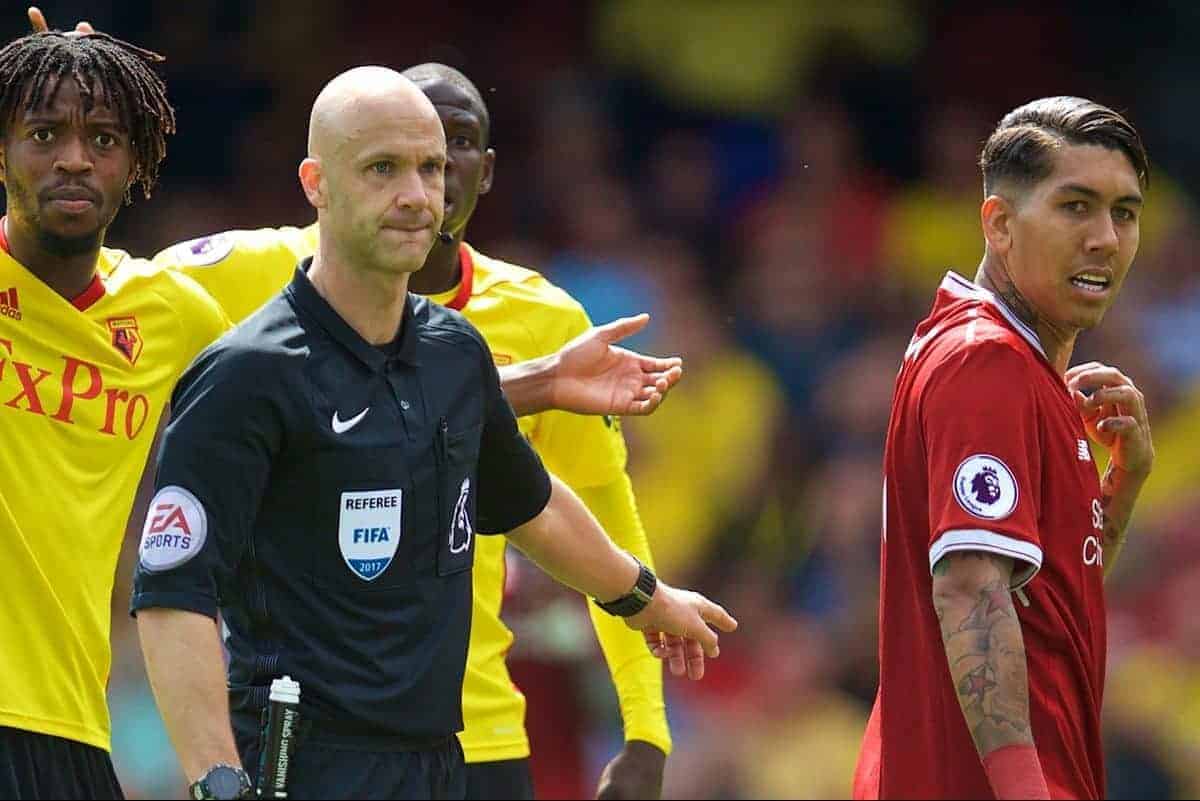 Anthony Taylor will referee Liverpool’s clash with Watford on Saturday, after presiding over a controversial decision in the reverse fixture in August.

The Reds are looking for an immediate response to the weekend’s 2-1 loss at Man United when they take on the Hornets at Anfield.

Having fallen behind in the race for second place, and with Chelsea, Arsenal and Tottenham all picking up three points in their respective clashes, victory over Watford is vital.

Jurgen Klopp‘s side were, however, held to a frustrating 3-3 draw by the Hertfordshire outfit on the opening day of the season, in a game marred by a questionable offside call late on.

But as replays proved, the Uruguayan was offside when Richarlison fired in his initial effort, with Simon Mignolet pushing it onto the crossbar for the awaiting centre-back to convert.

Taylor and his assistants failed to spot the error, and speaking after the game Klopp described the call as “obvious,” claiming “the linesman is on the line. He needs to see it.”

The appointment of the same referee—albeit with a different supporting cast in linesmen Adam Nunn and Daniel Cook and fourth official Roger East—will likely prompt criticism.

But fears can be allayed by Liverpool’s record in recent games with Taylor in charge: unbeaten in their last 11 games with the 39-year-old as referee. These have, naturally, not come without controversy, particularly in last year’s 2-2 draw away to Sunderland, with Taylor awarding the home side two penalties, both when the Reds were leading.

His appointment for the 0-0 stalemate at home to United in the same season came under scrutiny, as a Greater Manchester native, though he ultimately presided over an uneventful game.

But on the whole, Liverpool can hope for this to prove a good omen, having won seven times in this 11-game unbeaten run when Taylor has held the whistle.

He has refereed the Reds more than any other side, and despite this they have only lost five of those 29 games, winning 16.

Taylor has only ever sent off two Liverpool players: Emre Can for two yellow cards in the 4-1 loss to Arsenal in 2015, and a straight dismissal for Doni in 2012’s 3-2 win at Blackburn Rovers.

Watford lost 3-0 away to the Gunners last time out, providing Klopp with the blueprint for victory on Saturday, and he will be hoping for a more favourable outcome than at Vicarage Road.