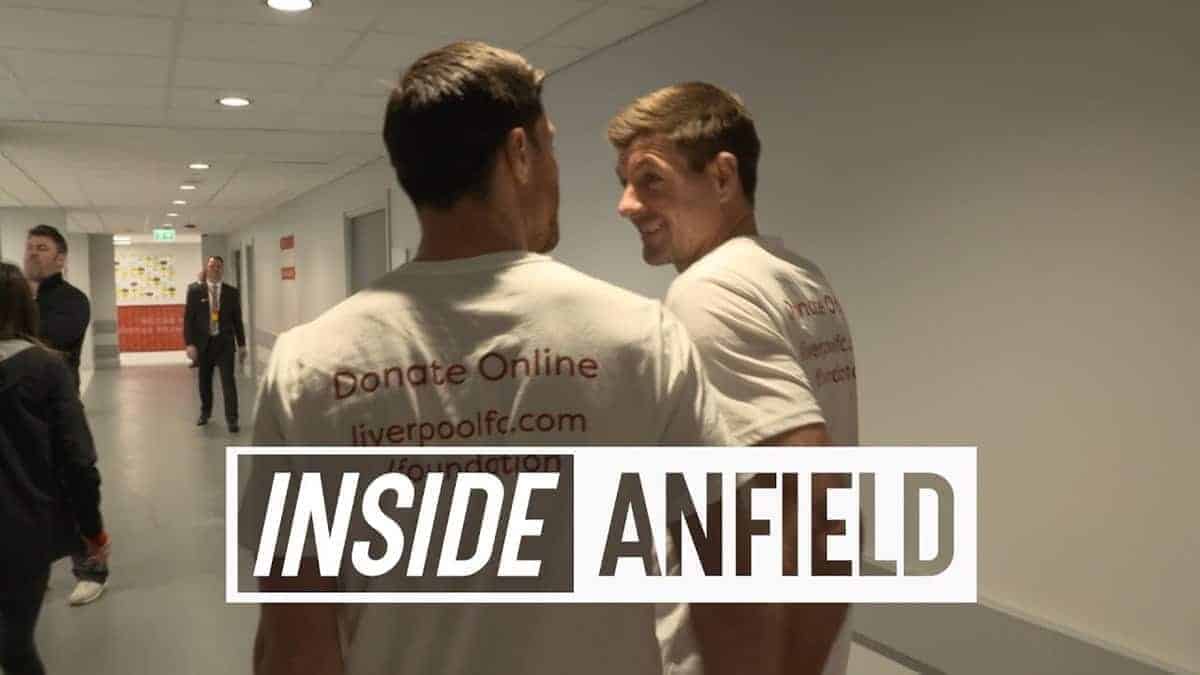 Liverpool Legends played out a goal-filled draw with Bayern Munich at the weekend, with Xabi Alonso and Dirk Kuyt among those to return to Anfield.

The two sides met on Saturday afternoon, with the eventual 5-5 draw played out in front of a packed crowd including plenty of youthful faces.

It was a wonderful afternoon on Merseyside, with 90 percent of the proceeds going to the LFC Foundation—a charity that focuses on improving the lives of children and young people in Liverpool and beyond.

The club releases an ‘Inside Anfield’ video after every first-team home game, and the Legends have enjoyed the same treatment in the above footage.

Some great players of the past rolled back the years by arriving to a heroes’ welcome on the team bus, with autographs and photos the order of the day.

That applied to Bayern, too, with legendary midfielder Lothar Matthaus one of many who supporters were especially keen to see up close.

Steven Gerrard and Xabi Alonso conducted a pre-match interview together, having both been named in the Reds’ starting lineup—Alonso played 45 minutes for each on the day—before warmup.

Istanbul hero Jerzy Dudek received the warm welcome he deserves when he took to the field, and the action got underway following a great rendition of You’ll Never Walk Alone.

The goals flowed in first half, with Dirk Kuyt heading home, Robbie Fowler registering a double, Bayern leading 4-3 from nowhere, then Fowler levelling things up to complete his hat-trick.

There is some great footage of the goals, not least Fowler’s second of the afternoon, when he uses his newly-formed belly to put the ball into the net.

As always, Jason McAteer seems to be the butt of the joke, with Gerrard mocking his first-half performance in the tunnel during the interval.

Alonso and Bjorne Tore Kvarme exchanged goals in the second half to finish off the scoring, and after the game the players receive a lovely ovation from the supporters.

It is a great watch for any Liverpool supporter, and a nice bit of respite from the stress of watching the Reds competitively every week.