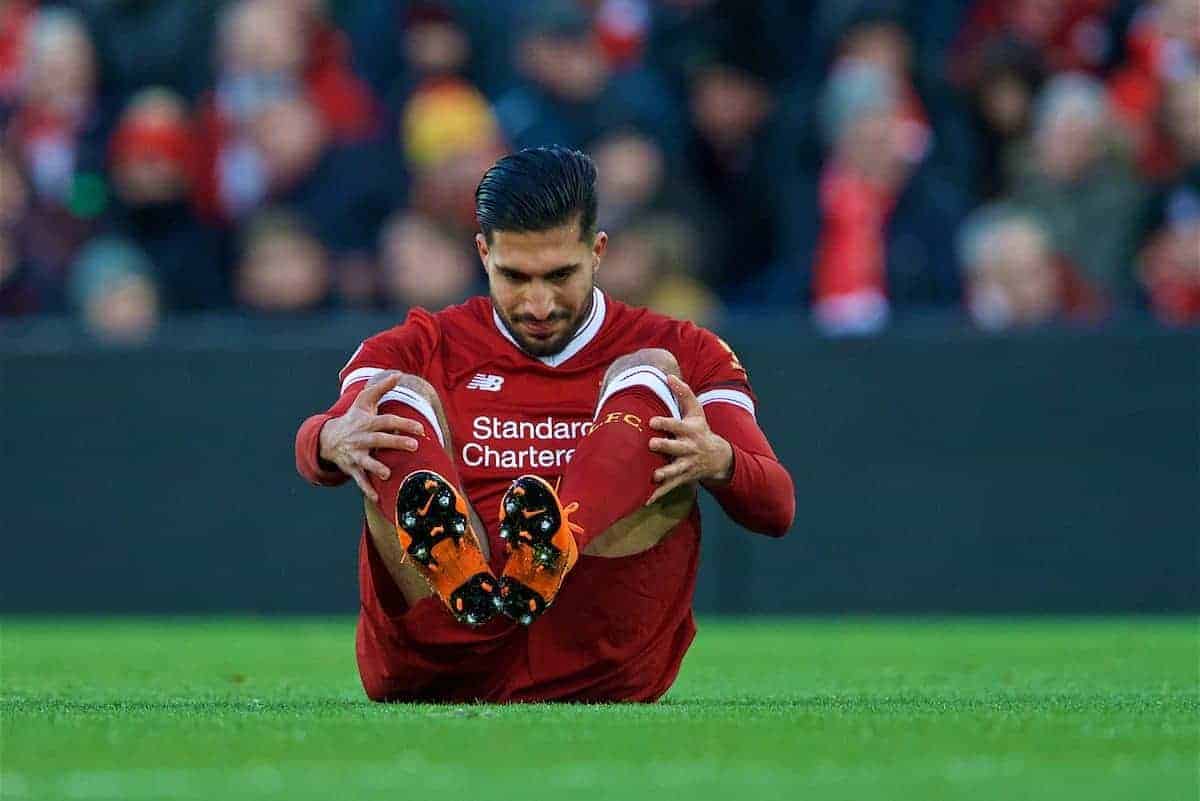 The Reds will be looking to gain a much-needed advantage as they take on City at Anfield in the first leg of their quarter-final, having already beaten Pep Guardiola’s side at home this term.

The prospect of shipping three goals like they did in January’s 4-3 victory in the Premier League is one to be avoided, however.

Can’s physicality in midfield could have been a boost in this sense, but the 24-year-old is now considered unlikely to be available for Liverpool.

According to the Liverpool Echo, with Can yet to return to training after suffering a recurrence of his back issues on duty with Germany, he “is losing his race to be fit.”

Klopp is said to have “hoped [Can] would return to training over the weekend,” but “as he continues to have treatment” he is a major doubt for Wednesday.

Can played 27 minutes of last month’s 5-0 win at home to Watford, and though he joined the Germany squad for the international break he was forced off early into their first training session.

His absence is exacerbated by a new injury for Adam Lallana, and the Echo reinforce the belief that the Englishman “is unlikely to play again this season.” Saturday’s 2-1 win away to Crystal Palace saw Klopp opt for a starting trio of Jordan Henderson, James Milner and Georginio Wijnaldum in midfield.

But this is a blend that offers little in terms of progression, though Milner’s sweeping runs down the left flank did prompt the Reds’ second-half equaliser through Sadio Mane.

Wijnaldum served as a passenger at Selhurst Park, and it could be telling that Klopp withdrew the Dutchman just after the hour mark as he introduced Lallana and Alex Oxlade-Chamberlain.

Oxlade-Chamberlain ultimately played a pivotal role in Mohamed Salah‘s winner, lofting a cross towards Andrew Robertson to touch down for the No. 11.

Though the ex-Arsenal midfielder is yet to tie down a guaranteed role in the middle of the park, he is arguably the most decisive of any of Klopp’s remaining options.

It was Oxlade-Chamberlain who scored the opener in City’s only defeat in the Premier League so far this term, marking a man-of-the-match display at Anfield.

That evening saw Oxlade-Chamberlain take the game by the scruff of the neck, with an authority that suggested he could be a leader within Klopp’s squad.

With Can and Lallana both absent, it should be the £35 million summer signing who Klopp elects to turn the tide.