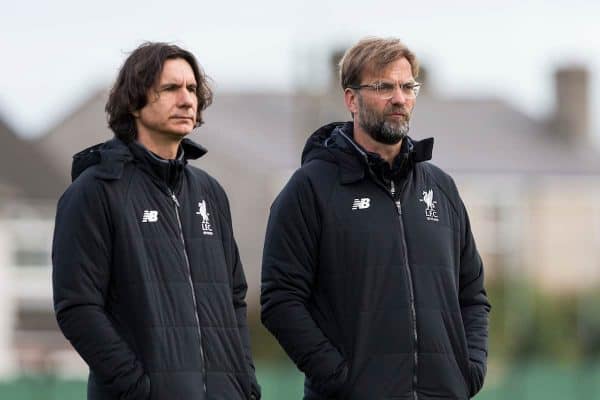 Jurgen Klopp is unlikely to make wholesale changes for Liverpool’s clashes with West Brom and Stoke City, but he could use them to plan for the future.

As the Reds’ Champions League campaign rolls on, Premier League commitments have taken a sidestep for supporters dreaming of a sixth European Cup.

But with both legs of their semi-final against AS Roma to come on April 24 and May 2, Klopp has continued to stress the importance of consistency in both competitions.

Nevertheless with Liverpool set to play five games over 16 days from Saturday, rotation is likely to be employed as Klopp seeks to keep his side fresh to challenge on both fronts:

With victory over two legs in Europe essential, and the trip to take on Chelsea on May 6 a possible top-four decider, the best chances to rest key names come against the Baggies and the Potters.

Injuries to Joel Matip, Emre Can and Adam Lallana limit Klopp’s options, but his lineups for both of these clashes could give an indication as to his plans for next season.

Matip’s season-ending thigh injury is symbolic of a wider issue within Klopp’s defensive ranks, with Joe Gomez, Ragnar Klavan, Dejan Lovren and Nathaniel Clyne all struggling for fitness of late.

Though Roma have only scored 15 goals in the Champions League this season, at least eight fewer than any other semi-finalist and 18 fewer than Liverpool, the Reds will still require a strong defence against the Serie A outfit.

This would likely see Loris Karius marshal a back line of Lovren, Virgil van Dijk, Trent Alexander-Arnold and Andrew Robertson, who started together in three of four knockout games so far.

There is certainly a cause to argue that consistency in selection would be beneficial, but risking further injury would be ill-advised.

Whether Klopp opts to rest Karius remains to seen, but if he does his choice of alternative, be it Simon Mignolet or Danny Ward, may shed light on their futures.

Having been usurped by Karius as No. 1, Mignolet is near guaranteed to leave the club at the end of the season, but his inclusion against West Brom or Stoke would likely be a death knell for Ward’s hopes too.

If Ward is selected, however, after an impressive showing for the U23s in Monday night’s 3-1 win over Everton, this could represent a show of faith from Klopp as next season’s No. 2.

With Matip sidelined, the returning Gomez is ostensibly second-choice right-sided centre-back, and these ‘lesser’ challenges could be the ideal opportunity to utilise the 20-year-old in his favoured role.

Klavan provides an alternative to Van Dijk, but with the Dutchman the cornerstone of Liverpool’s defence and rarely rested when fit, lining him up alongside Gomez could give a glimpse of Klopp’s long-term pairing.

Another possibility for the future is Georginio Wijnaldum‘s development in the No. 6 role, having impressed there against both Everton and Man City in recent weeks.

Without Can, Klopp’s only other option at the base of the midfield is Jordan Henderson, and despite reservations on the terraces he remains de facto starter.

But as with Gomez at centre-back, if the manager is set on nurturing Wijnaldum in a deeper role these two fixtures could be ideal.

The dull 0-0 Merseyside derby draw at the beginning of April saw Klopp make five changes to his starting lineup as Klavan, Clyne, Wijnaldum, Danny Ings and Dominic Solanke all came into the side.

Speaking ahead of that game Klopp explained how he required “fresh legs” after the 3-0 win over City at Anfield three days previous, but the drop in quality was clear.

While Klavan and Clyne provided serviceable options at left- and right-back respectively, their all-round game was decidedly lacking when compared to Robertson and Alexander-Arnold.

And both Ings and Solanke struggled up front, understandably paling in comparison to Mohamed Salah and Roberto Firmino.

Klopp’s starting side is arguably the strongest it has been since he took over in 2015, and bar one or two positions his summer transfer window is likely to be spent fleshing out his squad.

The circumstances are different for each of Clyne, Klavan, Solanke, Ings and Alberto Moreno, but their involvement against West Brom and Stoke could highlight their prospects.

Long-term injury to Clyne has seen him fall behind both Alexander-Arnold and Gomez in Klopp’s right-back pecking order, and if he remains on the periphery it is difficult to see a way back in.

And despite beginning the campaign as first-choice left-back, the form of Robertson has seen Moreno’s hopes fade, and he is set to tally fewer than minutes over the past two seasons combined (currently 2,751) than in 2015/16 (4,149).

Klavan may be content with serving as backup centre-back, but he is set to shift from third- to fifth-choice within 12 months, and at 32 he could feasibly still be first-choice elsewhere.

For Ings and Solanke, their involvement in these two games could provide Klopp further clarity over their futures: if they perform, they could remain; if not, they could be sold or loaned out.

This may place too much emphasis on 180 minutes of football, but with few other opportunities between now and May these games could prove decisive, in the eyes of Klopp or the players themselves.

Will Klopp Trust His Youngsters?

Klopp has named four of the 10 youngest starting lineups for a Premier League side this season, including the youngest: with an average age of just 25 years for February’s 2-0 win at Southampton.

Alexander-Arnold (19), Gomez (20) and Solanke (20) have all made more than 20 appearances in all competitions, while Ben Woodburn (18) has featured once.

Conor Masterson (19), Rafa Camacho (17) and Curtis Jones (17) were in the matchday squad for this month’s goalless draw with Everton, as Klopp turned to the academy for able bodies.

None of the trio made it onto the pitch, but their inclusion was a show of faith from the German amid an injury crisis.

With Can and Lallana both still sidelined and changes likely, these clashes with relegation-bound sides could afford Klopp the opportunity to introduce some of his young hopefuls.

Both pre-eminent talents, Jones and Woodburn will establish themselves as regulars under Klopp sooner or later, but their involvement against West Brom and Stoke could hint at their being fast-tracked next season.

Rhian Brewster, currently on the shelf after knee surgery, is an example that Klopp is willing to take this approach.

Meanwhile, the inclusion of Masterson and Camacho, or even the likes of Adam Lewis, Herbie Kane and Liam Millar, could serve as an indication of long-term plans for the academy.

With a top-four finish still to fight for, and Klopp setting his sights on second place, taking all three points from both West Brom and Stoke is imperative.

But as he juggles this with Liverpool’s hopes of Champions League glory, some lingering questions could be answered over the space of two Saturdays.